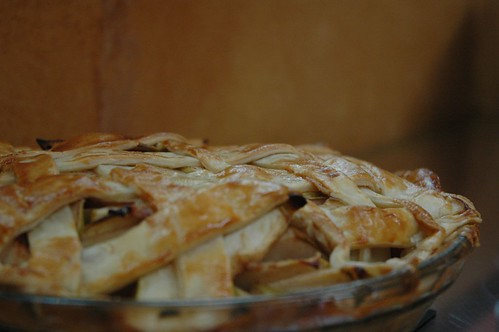 With every fall season and harvest time, I do a little dance for joy and promise myself that I’d go apple picking. Each time. I’ve not been apple picking in about ten years, but who’s counting. I wind up making grandiose plans, reciting Robert Frost, praising the idyll that is New England only to find myself making apple pies and other biblically-forbidden delights with store bought apples. Not the same thing, people, but when a girl wants to get her apple groove on, there’s just no stopping her.

When people ask me what my favorite fruit is, I say apple without so much as taking a breath. If it suddenly became illegal to consume apples, I’d be in violation in no time. I’ve always pitied Eve, though according to archaeologists and historians, the biblical fruit referred to as the apple is actually the persimmon, also yummy, but still. For the sake the argument here – the apple is the reigning symbol of sin. 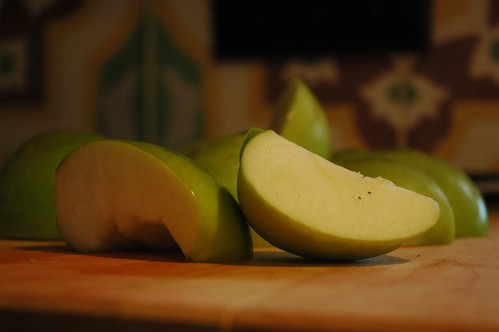 And for this Thanksgiving, I decided to kick it up a notch. Let apples make new friends with their produce neighbors – pears. With a bit of sugar and cinnamon, those two, I thought, would make fantastic friends. And so it was. The apples and pears went into the fray together, mixed with sugar and cinnamon, lovingly sprinkled with lemon juice to prevent discoloration.

And it was all glorious and good. And here’s where I confess that I cheated and used the Pillsbury crust found in the refrigirated section of your supermarket. I was running out of time, people, I am not lazy. I promise, it won’t ever happen again. 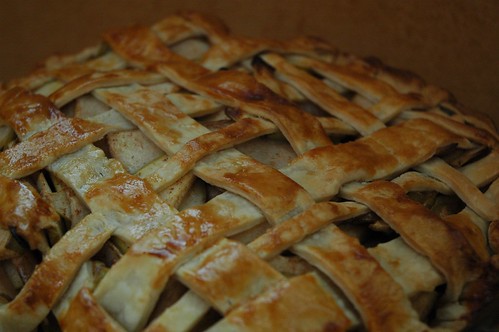 The upside was that the crust is actually tasty and no one knew the difference. The downside is that I have to go to bed each night knowing that I could’ve made the crust, but instead, I took the easy way out. Robert Frost would SO not be proud.

You see, I tell you everything here – my successes AND my shortcomings. And cutting corners on Thanksgiving day was one of them.

With three cheesecakes, mini cherry and pumpking pies (I didn’t make), and my apple pear pie wonder, we were all sufficiently desserted out. And probably on quite a sugar high by night’s end.

2. In a medium bowl, toss the apples, pears, sugar, cinnamon, and butter together. Place the filling in the pie crust. Next, do the lattice top. Brush the top of the pie with a pastry brush dipped in egg – this will give your pie that golden shiny crust.

3. Bake for 40 to 50 minutes, until the crust is golden brown and the juices are bubbling.

3. Let cool at least 30 minutes before serving. Serve warm or at room temperature.