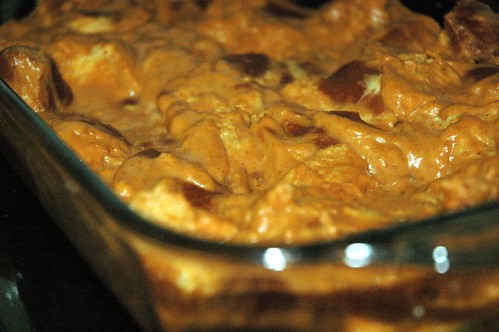 I was introduced to bread pudding at an embarrassingly late age. The concept of bread pudding isn’t known in Russia and save for Victorian English novels, I was unaware that this comfort food staple of England was such a delicious treat. Now, the first time I ever had anything that bore the name “pudding” was at my high-school boyfriend’s house, whose mother carried the old English tradition of making fig pudding for Christmas dinner.

Never one to why from trying a new dish, I requested, ignoring my boyfriend’s father’s warning, a bowlful of fig pudding with some extra clotted cream.

The cream I consumed in a matter of seconds – give me fattening dairy products and I’m a happy girl. But with the actual fig pudding, erm, well, there I had a bit of trouble. I tried, afraid to offend the matron of the house, to shove spoonfuls of it in my mouth, but that caused a bit of a gag reflex. My next strategy was to try to eat little bits and swallow them whole without so much as letting the thick fig concoction hit my tastebuds. That made the procession move about as quickly as a turtle race. And then, oh Lord, then, I was informed, perhaps in an attempt to induce vomit, that fig pudding, according to the tradition, uses suett. At that point, my 17 year-old heart and palate, could take no more (though now the concept of suett isn’t nearly as frightening). I apologized profusely, offered to do dishes and various clean up, but firmly and politely declared that fig pudding was just not for me. As it turns out, even though the pudding was made every year, it was never actually consumed by anyone. Except for the unsuspecting dolts like me.

So you can understand why I would try to avoid pudding at all costs from that point on. My only point of reference regarding pudding was less than enthusiastic.

That is until one afternoon, while wandering around Nolita I stopped at Cafe Gitane, tempted to try what they called a brioche chocolate pudding. Since I liked both, the brioche AND the chocolate, it seeemed like an awfully swell thought. The order was placed. And I was all trepidation. What, by some strange thought, if the whole process of pudding-making made the brioche and the chocolate both vile on the palate?

But when the dish arrived and I put a tentative spoonful of it in my mouth, I melted into a blissful smile, eyes closed. This was pudding I could not only live with, but crave.

And so a few years later, when I came upon a recipe for Pumpkin Souffle Bread Pudding, concoted by none other than Charlie Phan of the famed Slanted Door in San Francisco (only one of my favorite restaurants), I had to give it a try. 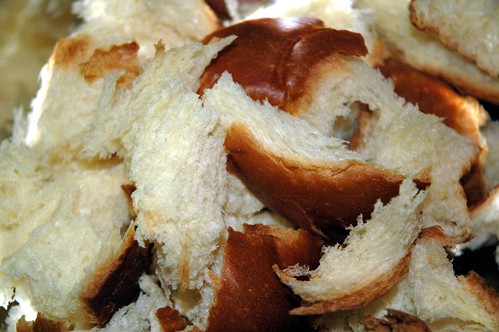 Last Thanksgiving, I made a small batch to test on guests – and it was gone in minutes. This year, I tripled the proportions only to see the same result, and several requests for recipes. 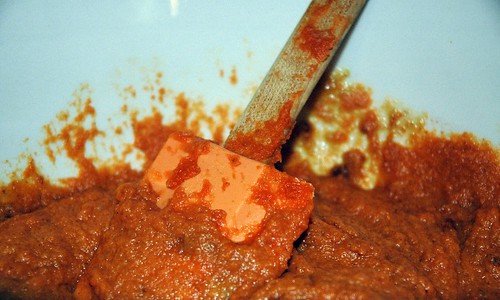 And yesterday, while at Whole Foods, picking up a turkey for our Thankgiving Redux meal (because we like turkey leftovers and there were none from 2 weeks ago), the boyfriend requested the bread pudding as well. And so, when a dish is this popular and is so good, how can you not make it over and over and over? Especially when it’s so easy? And especially when you get pudding, souffle AND pumpkin into the same dish!

1. Heat oven to 375°F (191°C; gas mark 5); position the rack in the middle. In a small saucepan set over low heat, bring the milk and the cream to a simmer. Place challah cubes in a bowl. Remove milk-cream mixture from heat and pour half of the liquid over the challah. Let sit.

2. In a stand mixer fitted with a paddle attachment set on high speed, cream the butter and the brown sugar until light and fluffy (start the mixer on low and gradually increase to high speed). Add the egg yolks, cinnamon, nutmeg, cloves, and allspice, beating well, on medium high, until emulsified. Add the pumpkin puree and the remaining dairy mixture, and mix until thoroughly combined.