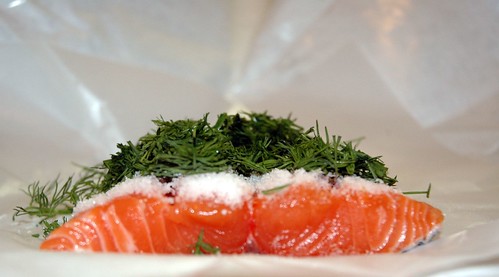 Call me a purist, but I recoil in horror whenever I’m offered anything to dress an oyster. Few things are so perfect and precious as oysters are and to add anything to a quality oyster is just plain wrong, people. As for mediocre oysters, I say why bother?

It has generally thus been with me and salmon. I know that the world is divided into salmon lovers and salmon haters (well, maybe it’s a bit more complicated than people who love or hate a fish, but humor me for a minute here). I’ve always been a fan of the fish for its sheer ability to transform a bagel from ordinary into a feast. But I’ve always felt that lox has unfairly claimed center stage to its less known, but tastier cousin – gravlax.

Nothing more illustrious than just salt-cured fish, gravlax possesses the kind of pure, clean taste a fresh oyster does. It’s delicate to the palate, unmistakably raw, caressed by a blend of sea salt and dill. Put that on a bagel and you have an exotic, celebratory breakfast. And on poached eggs with hollandaise, it’s simply breathtaking.

And the best part of all – making it is a cinch. A third-grader could do it. Someone who’ve never cooked, never mind never cooked fish could do it. All you need is a little bit of patience, for gravlax is a thing of a few days in the making, and a few ingredients.

I must admit though that while I thought my gravlax was redefining sublime, the BF tried it with trepidation, worrying that the fishy might have gone bad and I was en route to giving us both food poisoning. Thus, after having a few pieces, unable to consume a pound or raw, salt-cured fish, the whole issue was put to rest, and then eventually, to trash. Still, had I been home more to consume food, and not stuck in the office (can you see how I haven’t posted in ages?) eating take-out dinners, this salmon wouldn’t have met its maker via the trash bin route.

1 pound fresh salmon, preferably wild-caught
Kosher salt (I use about 1/2 cup – enough to cover the salmon)
1/2 cup chopped fresh dill
Finely grated zest of 1 lemon
Cracked peppercorns (I like to use a mix of black, white, and pink)

Pat dry your salmon with paper towels and set aside. In a medium bowl, stir together the salt, dill, zest, and peppercorns. Place the salmon over a large piece of plastic wrap and generously cover it with the curing mixture; use less curing mixture where salmon is thinner and more where it’s thicker. Wrap the fish in the piece of plastic wrap it is sitting on. And wrap it in another piece of plastic, or better yet transfer to a plastic bag. Refrigerate for 2 days. Before slicing and eating, thoroughly brush the salmon free of the curing mix (sometimes I give it a very quick rinse and pat it dry). Slice thinly and serve.