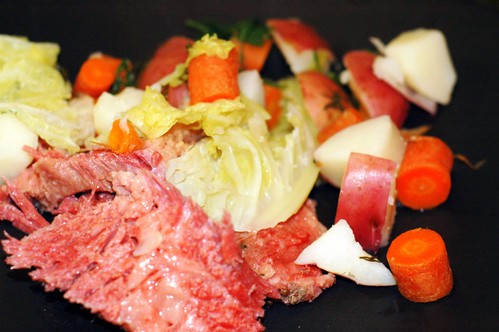 I have, on a number of occasions, claimed that give me a holiday having nothing to do with my culture, throw some good food in it, and I’ll be more than happy to celebrate it just for the food of it. A few people in the past raised their eye brows at me when I told my stories of lamb roasts over Easter weekend, or trying (albeit unsuccessfully) to make aloo ghobi over Divali. My own favorite holiday, Thanksgiving comes with my favorite dishes, plenty of them, and a table full of friends. Interestingly enough, I quickly grew to love Thanksgiving and kind of forced it on my family. And now my mother kind of even likes it. But I digress. 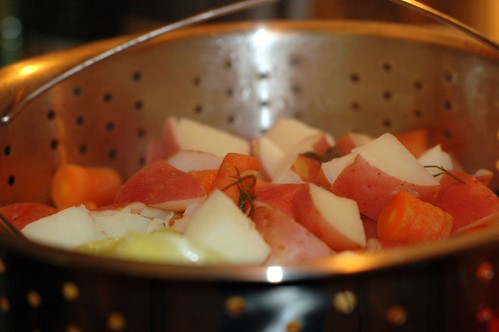 I realize that there’s just about as much Irish in me as was in Golda Meir, and I’ve never even visited the Emerald Isle. And even despite the fact that in my heart, I always felt a little Irish, with what, my love of Guinness, Irish music, my favorite writers are all Irish (Joyce, Wilde, Yates, Shaw, Thomas Lynch), cabbage and potatoes (undoubtedly stemming from my Russian upbringing) and whiskey; I cannot, rightly, lay claim to the heritage, being its eager admirer nonetheless. And yet, despite all that, when KS emailed me about making corned beef and cabbage with mustard for dinner Friday night, I leapt at the opportunity, immediately researching the recipes online. Give me slow-cooked tender meat that has been braising in the oven for hours on end, and I’m a happy girl. 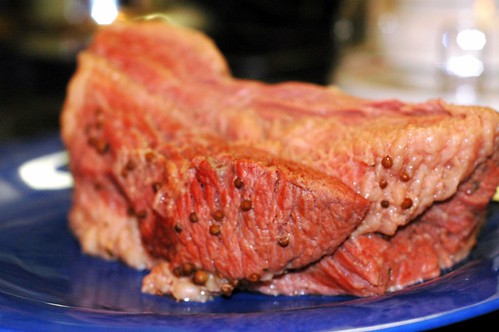 If any of you reading this are New Yorkers, you will probably remember Friday as the worst weather day in the history of winter 2006-2007. I don’t even know what that was that fell from the sky, but I’ve never seen anything quite so nasty. Microscopic icicles? A new strain of sleet? Spiked, armed snowflakes?

Nursing a cold and a Rudolph-red nose, the last thing I was looking forward to doing is going to Whole Foods and picking up the ingredients for our Irish-pride feast. But KS, being a gentleman and world’s most glorious boyfriend, did it for me, picking up a succulent cut of corned beef brisket from Bazzini along with a few other ingredients. 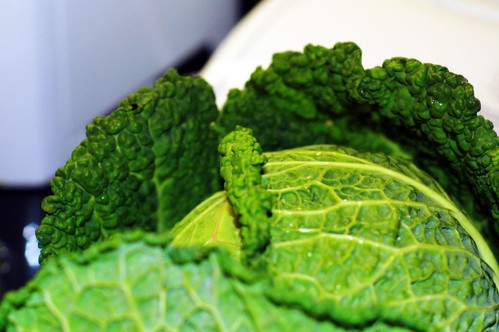 As soon as I came home from the office, I got immediately to work around starting around 5:30pm, and by 9:30pm we had ourselves a simple, Irish meal, so delicious, we regretted not buying a larger brisket so that we could have leftovers or make it into corned beef hash (but we later decided that not only are we going to make this again soon, we’re going to brine the brisket ourselves – ha!). 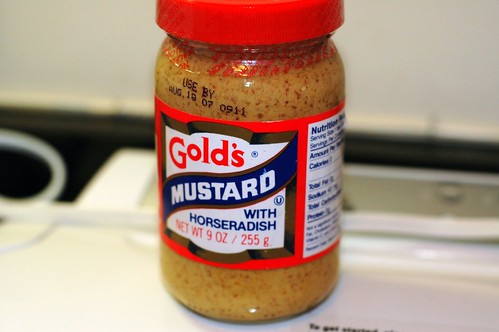 The four hours of waiting was worth every minute. And while corned beef with potatoes & cabbage is one of the simplest, easiest things to make (I still cannot believe how little effort it took and how good it tasted), it has an honesty to it that is filling, satisfying and comforting. While the weather outside was frightful, we, wrapped in fleece and wool, ate on the couch, watching the Empire Strikes Back, and gobbling up our food. The only thing missing from our dinner was soda bread, but given the fact that I just learned the soda bread I have known and liked in the past is apparently an impostor, maybe that’s okay. The authentic version sounds a bit unappetizing.

So okay, I’m not Irish by blood, but perhaps being a little Irish at heart is acceptable? And while on Saturday, I didn’t imbibe(colds and beer rarely go hand in hand), I did pick up a tome of Yates and read a few poems.

Preheat the oven to 300 degrees F.

Place the corned beef in a colander in the sink and rinse well under cold running water.

Place the corned beef in cocotte like Le Creuset or Staub, with a tight-fitting lid; add the water, bay leaves, peppercorns, allspice, and cloves. Bring to a boil, uncovered, and skim off any scum that rises to the surface. Cover and transfer pan to the oven, and braise until very tender, about 3 hours and 45 minutes.

At about 3 hours, pull out the pot, and pour some of the liquid into another large pot, add potatoes to it and bring to a boil. For the last 10 minutes of potatoes cooking, throw in the cabbage (you don’t want mushy cabbage, trust me). Once the potatoes and the cabbage are done, drain them and toss with some freshly cut dill.

Pull the brisket from the pot, slice and serve immediately with cabbage and potatoes, and mustard.