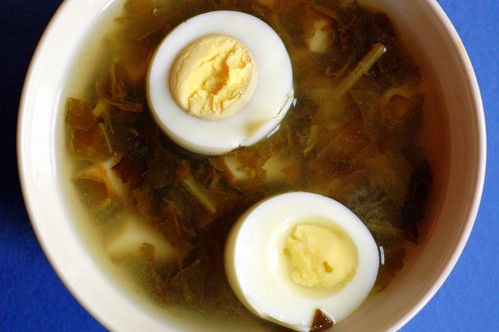 So really, how many childhood-memories-in-a-recipe can I recall before even the most congenial person rolls his or her eyes and groans “What is it with your perfect childhood? Why can’t you just live in the present?” And really I do, I promise you. It’s just that for so long I wanted to eat everything, but the cuisine I grew up with. And reading a piece in this week’s New Yorker magazine’s annual food issue by Gary Shteyngart, with whom I share many an immigrant experience, I paused to examine my teenage aversion to the cuisine of my childhood and my obsession with all things American-cuisine related, including those golden arches, I now so revile.

I don’t know what caused me to start craving my “ethnic” food so to speak. I put ethnic in quotations, because for as long as I lived in Russia, I was constantly reminded of not belonging. Being Jewish in Russia, had little to do with your religion (which my parents didn’t practice in the slightest), and everything to do with your “race” or “ethnicity” because that’s what it was and continues to be considered. So the Russian food I grew up with, mixed with the Jewish food of my family, was all mixed together, but I was always conscious of Russian culture as that to which I didn’t belong. It was only in America that my Jewishness became associated with my religions leanings, and where I came from, namely Russia, became my defining cultural adjective. When people ask me about my background, I tell them I’m Russian.

In any case, there was a long, long period, when I refused to go out to Russian restaurants and willingly eat and cook Russian food. I chastised my mother, I wanted to change, to adapt, and I was tired of eating the same kotlety and borscht I grew up with during my childhood. But something changed after I moved to New York. It wasn’t that I suddenly found myself surrounded by Russian friends, it wasn’t so much the presence of Russian cuisine in my beloved Brooklyn, where I first made my home in New York. It was something else, a feeling of loneliness perhaps, that made me crave the food again. Far away from my family, without a single friend in the city, working long hours in an environment that was harsh and pitiless, I would come home from work, throw a dozen of frozen pelmeni into the pot of boiling water and in ten minutes, I would have hot and hearty dinner waiting for me. A dollop of sour cream, a splash of white vinegar and I would sink into the couch with my bowl of meaty dumplings closing my eyes at each swallow – blissfully forgetting my misery if only for the few minutes it would take me to consume my dinner. I think it was then that I realized that you can leave home, if only temporarily, only to long for it again. I envied my Russian friends with families around them, I wanted that security as well. But I chose this lot for myself and had to stick it out. 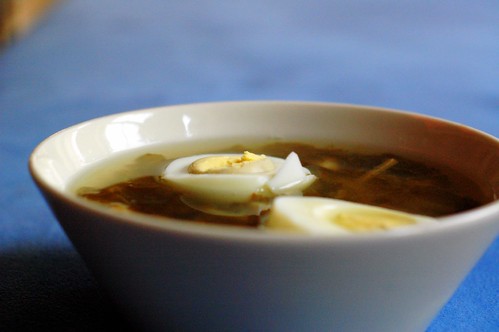 When KS and I met, I was delighted to learn that he had an appetite and a food curiosity that rivaled mine and while it took me awhile to cook for him, I definitely tried a few Russian dishes on him – and he loved each and every one of them. Stuffed cabbage, pelmeni, the Russian potato salad otherwise known as olyvie, borscht, mushroom soup, herring – KS ate everything and always went back for seconds.

And so when I begged him to get a sorrel plant for our rooftop garden and he acquiesced, I told him of this wonderful schav my mom would make for us in Russia where sour grass, its other name, would be abundant and cheap. We brought the little plant home and gave it a nice pot. But it never grew to anything big and I postponed the soup each time. 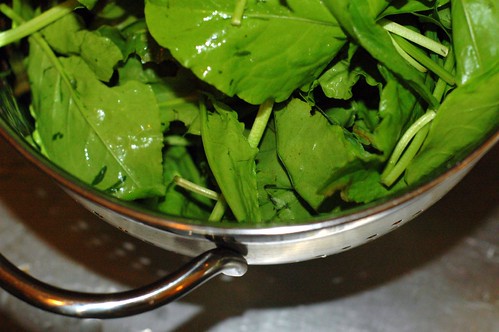 That is until last Saturday, when I found myself staring at bags of sorrel at our local green market. I was so excited that I grabbed the bag as fast as I could as if the other dozens of bags were suddenly going to disappear. I brought the bag home and proudly proclaimed, “Oh, I am making us some schav, baby!!”

To which KS replied, “Yeah, so um how do you make it?”

And this is where I drew up a blank. Sure, I’ve eaten this soup more times than I could recall, but I had no idea how to make it. Of course, mom, only a phone call away, patiently explained to me how to make this super simple soup. And when I say super simple, people, I mean, this is the pits. It’s as easy and fool proof as it gets. No wonder we made this all the time in the summer. And the little shrimpy me with no appetite whatsoever, would eat two full bowls of this every time.

This recipe is different than other schav recipes I’ve seen out there. I’m not sure why my family makes it differently, but I can honestly say I prefer my mom’s recipe to the other ones I’ve had. For one thing it’s more clean-tasting, and secondly, it’s clear and pretty. But like all childhood-favorite foods, we always think our version is better than everyone else’s.

We’re visiting my parents this weekend and my mother’s making borscht. I’m sure there will be other Russian goodies present. And I can’t wait.

Place the sorrel and the potatoes in the pot and fill up with enough water to cover the leaves and then have about an inch or two more water above the leaves’ level, add chopped parsley and dill (if you have too much water, you can always just simmer longer and let it evaporate). Heat to boiling, then reduce heat and simmer for an hour to an hour and a half. During this time, you will taste, taste and taste some more. Start with adding lemon juice of one lemon, but most likely you will need more. Add a little bit of salt and taste. Continue to modify your seasonings until you get a sour taste (be sure that it’s not sweet sour, but distinctly sour with a salty hint). You might need more lemon juice, you might need more salt. You will definitely need a bit of sugar to “round out” the salty/sour taste. When the soup tastes “right” to you – and I am sorry I cannot be more specific than that, but trust me, you’ll know it when you taste it – remove it from heat and chill.

When the soup is chilled sufficiently – when it’s cold it’s perfect – peel a hardboiled egg, slice it in half and place it in the bowl. Don’t forget to grab a spoon.

Note: the reason you put the potatoes in the beginning is because you want the soup to get a little bit starchy and thick. This won’t happen if you place the potatoes in the end. Also, most recipes add the egg during the cooking process – our family doesn’t. We like the hard-boiled egg at the end. But that’s just us.