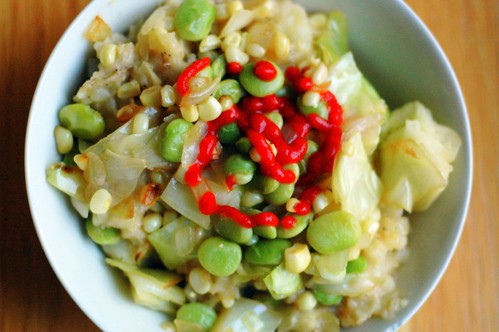 I can be a real bore sometimes, I really can. I get one idea of a meal in my head and when someone tries to throw me a curve ball, I have a cow. It’s not that I’m unwilling to rethink a recipe, turn it upside down and change its appearance – it’s just that I get a vision in my head and then I’m hopelessly stuck in it, at least for the duration of the recipe. Call it “recipe tunnel vision”.

It’s been awfully un-summery outside as of late. Temperatures in the fifties, winds, rain and me shivering outside. I pulled my trench coat out, my sweaters are back on shelves out of their temporary storage. I was going to make gazpacho for you people, and now what? I’ve been so distracted by this early onset of fall, that I not only made my favorite porcini mushroom soup, but also, so distraught by my distress, failed again, to take pictures of this soul and belly warming concoction. Gazpacho? Salads? Where are my soups and squashes to roast?

So when I emailed KS about dinner a few nights ago and he emailed me back that he was already on top of it (I know, I’m a lucky girl!), the nosy me, of course, just had to know what would be served. The response – vegetarian shepherd’s pie.

Oh and then the dreaming ensued. For the remaining hours at work, I was awash with anticipation – flaky pastry with potatoes, peas, corn, and other vegetables. I think that if you put a plain potato in front me of me, I’m in pure heaven, but mashed potatoes with the accouterments, or some other incarnation of them – few things make me happier. And so with visions of flaky pastry, I went rushing home, picking up a bottle of wine en route – to make our dinner all the more comforting. But KS, finding inspiration in the kitchen took the idea of shepherd’s pie and changed its structure by removing meat and crust. The result, not so much a shepherd’s pie, but rather fancy mashed potatoes. And yet, it tasted so much like shepherd’s pie that I took back my pouty face which was my initial reaction “What no crust? Why no crust? Must have crust!” But then again, my love of potatoes made that missing crust but a faint memory. I got so carried away with eating, that you get only one picture to feast your eyes on. See, this is what you get when KS makes me dinner – gushy write-ups and no pictures. I have much to improve upon!

In a large non-stick skillet, sauté the onions slowly, until golden brown and translucent, taking care not to burn the onions – this means you will have to be patient with your heat.

Add in lima beans, corn and cabbage and sauté together for 5-7 minutes.

Remove from heat and combine with mashed potatoes.

Adjust taste with salt and pepper.

Serve either by itself or with a dollop (or in my case a very generous spiral squirt) of hot sauce.