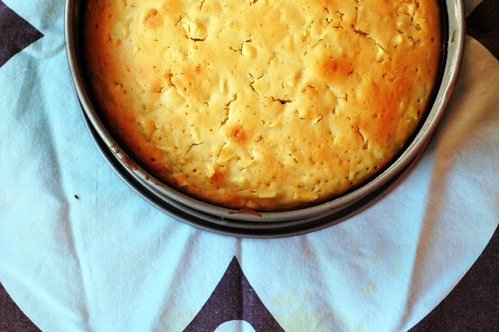 Sally Albright: But I’d like the pie heated and I don’t want the ice cream on top, I want it on the side, and I’d like strawberry instead of vanilla if you have it, if not then no ice cream just whipped cream but only if it’s real; if it’s out of the can then nothing.
Waitress: Not even the pie?
Sally Albright: No, I want the pie, but then not heated.

And this, my friends, is how I often will order food. First off there’s the complete reinvention of the recipe, which undoubtedly annoys both the waiter and the chef. And then adding insult to injury, the instructions I give are so unclear that the waiter will have to ask me the second time to repeat what I said. And this happens over and over to me.

Since I’ve completely switched gears from summer into fall, I’m done with the summer fruit (berry crumbles – I’ll see you later); I’ve been thinking apples, apples, apples. It donned on me two weeks ago that Rosh Hashana was right around the corner and an apple dessert would be in order. But what? The apple pie, as much as I love it, would be the expected apple treat, but my heart longed for something new, something different. I attribute this fickle mind of mine to living in New York. We get so spoiled here, and develop the attention span of a goldfish – four seconds and we forget the “traditional” or we get tired of it. Like spoiled children we look to new, shiny recipes like the new, shiny toys of our childhood. And those of us with food blogs take the cake (pardon the pun) for our demand of the new, shiny recipes. The recipe we haven’t yet written about, the recipe with stunning new photos, the recipe with a new take. This is where I found myself at the beginning of last week. Apple pie? Apple eh… 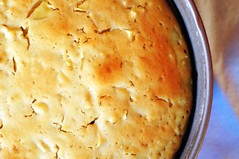 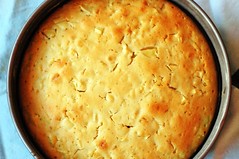 Enter ever-so-creative Deb with her apple yogurt cake from her new, shiny book “The New Spanish Table”. Deb, I’ve been given a cook-book buying moratorium by KS, so I will have to mooch off of you and other bloggers with sexier cook books. The cake in Deb’s pictures looked stunning, as usual, but as soon as I saw the words like “licorice” and “anise” and “Sambucca”, I paused, for while there are folks out there whose taste buds have morphed to like the dreaded substances above, mine have never adjusted and I don’t foresee that changing. Say the words “pastis” and “pernod” and you’ll see me recoil in horror.

So I took Sambucca out and added Calvados instead. I also mixed my own lemon yogurt by combining plain yogurt with fresh-squeezed lemon juice. The only time-consuming task was finely chopping the apples. But the rest of the process was a snap. And I think that in the future, I’ll play with yogurt flavors and various liqueurs. I just might, as a sick joke on my self, try it with Sambucca one day, but honestly, I don’t see myself enjoying it. I’ve experimented plenty in that flavor department and all I could find in the end was a taste that deeply displeased my palate. The appliness of this cake (why no, appliness is not an actual word, I just made it up – so?) pleased me and KS – making it a perfectly timed treat for Rosh Hashana, now a week behind us. Sigh – time flies so fast. 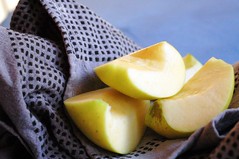 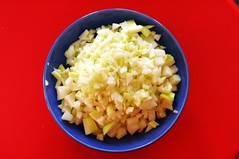 So Sally Albright or not, I like things just the way I like them. Even if I have to repeat my order a few more times, so long as I get a cake I like!

1. Butter and flour and 9-inch spring-form pan. Position the baking rack in the center of the oven and preheat 350 degrees F.

2. Sift the flour and baking powder together.

3. Place the eggs and sugar in a large mixing bowl and, with an electric mixer, beat for about 1 minute until fluffy and pale yellow. Mix in the yogurt and liqueur until completely blended and smooth. Beat in the sifted flour dropping 1/3 cup at a time and alternating it with the olive oil. Gently but thoroughly fold in the apples.

4. Scrape the batter into the prepared springform pan, tap it on a counter to level the batter.

5. Bake for 55 to 65 minutes until the top is golden, a toothpick inserted into the center comes out clean without dough stuck to it, and the cake bounces back upon touch. Remove from the oven and let the cake cool on a rack.

6. Run a thin knife around the side of the cake to loosen it. Remove the side and the bottom of the pan, then place the cake on a cake platter. (The cake can be baked up to 3 days ahead.) Wrap it loosely in a kitchen towel until ready to eat. (I am not an advocate of plastic, as I think it makes such cakes perspire). Serve the cake sprinkled with confectioners sugar.