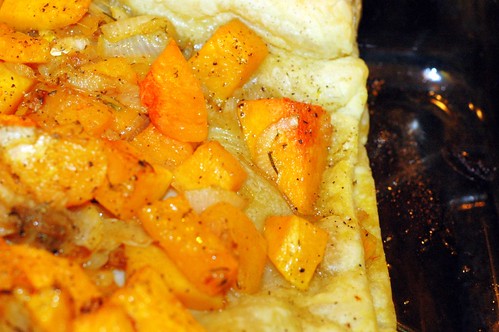 In grade school, we were quick to taught that if you add two numbers together, and then another two numbers together and add the sums of those two previous sums, you will get a third sum. You could, of course, just add the four numbers together and get the same thing. You don’t need that whole two and two thing. I caught onto that one real fast – and in first grade was the top math student in my grade, which in Russia, is really something. Thanks, Dad, for doing all those puzzles with me.

Unfortunately, the same laws do not apply to cooking. I’ve learned this one over and over and well, two nights ago, it was yet again manifested in my kitchen. I took ingredients I loved, put them together, and got something altogether different than what I had expected to come out. I should probably tell you right away, in the spirit of full disclosure, that I got a wee bit creative at the very last minute. And so it goes. 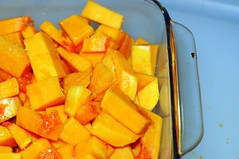 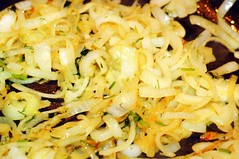 Deb of the Smitten Kitchen fame, posted a little while back about a galette filled with butternut squash (swoon), caramelized onions (double swoon) and fontina cheese (me faint with excitement). I clipped that recipe in my mind’s eye and was going to make it sooner or later. Well that sooner was two nights ago and I had that butternut squash sitting around on our kitchen counter, boldly challenging me to peel it and dice it – a task I feared more than making my own pâte brisée after the disaster this summer. (Deb swears it was the summer heat and humidity and not my own ineptitude that wrecked my pie dough – and I’ve been so traumatized by the experience, I’ve yet to repeat it.)

I peeled and cut the squash – all in all, it was not so bad. I already had the onions happily sautéing in the pan, turning to that seductive golden hue. I was on a roll. I decided to use the dill we had instead of sage (a deviation I actually don’t regret here, for a change). In short, it was a thing of beauty – KS popped into the kitchen three times to tell me just how good it smelled – people, he never gets that emphatic. It was all going so well. 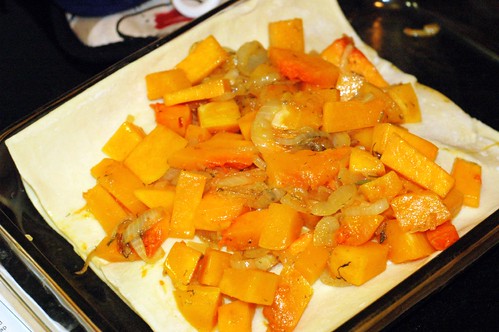 And then, then I got too bold. Too haughty and too clever. I thought to myself, “Hey self, you have some fillo dough sitting in the freezer – wouldn’t it be great to use that on the galette?” And this, dear reader, is where I went all kinds of horribly wrong. I should have just stuck with the recipe, but I didn’t. And that killed the dish flat out.

Something about the squash and the onions made the fillo gross and mushy and limp. It tasted raw despite having baked for over an hour. We picked the squash and the onions off of it and between the layers (oh yes, I just had to get creative with the layers too!) and KS consoled me that at least the flavors and the vegetables were good. The only silver lining here – KS actually likes butternut squash and can’t recall telling me he doesn’t. A success in some ways, though I wish the dish turned out fine in the end. I suppose you win some and you lose some. And maybe this loss is kitchen muse’s way of telling me that I should just go ahead and give that pie crust recipe another go – and maybe I just will.

I’m posting Deb’s recipe here in its entirety. I highly suggest you go with her version and not get creative like I did. Or not with the dough anyway.

For the filling:
1 small butternut squash (about one pound)
2 tablespoons olive oil
1 to 2 tablespoons butter (if you have only non-stick, the smaller amount will do)
1 large onion, halved and thinly sliced in half-moons
1 teaspoon salt
Pinch of sugar
¼ teaspoon cayenne, or to taste
¾ cup fontina cheese (about 2½ ounces), grated or cut into small bits
1½ teaspoons chopped fresh sage leaves

1. Make pastry: In a bowl, combine the flour and salt. Place the butter in another bowl. Place both bowls in the freezer for 1 hour. Remove the bowls from the freezer and make a well in the center of the flour. Add the butter to the well and, using a pastry blender, cut it in until the mixture resembles coarse meal. Make another well in the center. In a small bowl, whisk together the sour cream, lemon juice and water and add half of this mixture to the well. With your fingertips, mix in the liquid until large lumps form. Remove the large lumps and repeat with the remaining liquid and flour-butter mixture. Pat the lumps into a ball; do not overwork the dough. Cover with plastic wrap and refrigerate for 1 hour.

2. Prepare squash: Preheat oven to 375 degrees F. Peel squash, then halve and scoop out seeds. Cut into a ½-inch dice. Toss pieces with olive oil and a half-teaspoon of the salt and roast on foil lined (for neatness sake) sheet for 30 minutes or until pieces are tender, turning it midway if your oven bakes unevenly. Set aside to cool slightly.

3. Caramelize onions: While squash is roasting, melt butter in a heavy skillet and cook onion over low heat with the remaining half-teaspoon of salt and pinch of sugar, stirring occasionally, until soft and lightly golden brown, about 20 minutes. Stir in cayenne.

4. Raise the oven temperature to 400 degrees. Mix squash, caramelized onions, cheese and herbs together in a bowl.

5. Assemble galette: On a floured work surface, roll the dough out into a 12-inch round. Transfer to an ungreased baking sheet. Spread squash, onions, cheese and herb mixture over the dough, leaving a 1 1/2-inch border. Fold the border over the squash, onion and cheese mixture, pleating the edge to make it fit. The center will be open.

6. Bake until golden brown, 30 to 40 minutes. Remove from the oven, let stand for 5 minutes, then slide the galette onto a serving plate. Cut into wedges and serve hot, warm or at room temperature. Serves 6.