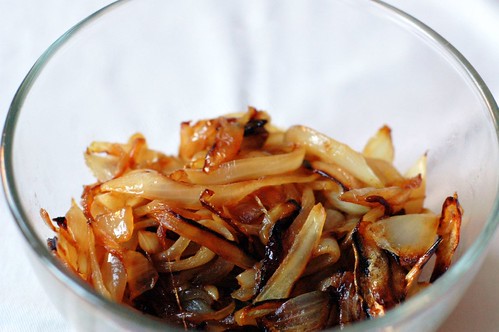 Among many things we quickly discovered about America when we first arrived is that you could buy chicken liver by the pound in plastic containers. In addition to its abundance, it was also shockingly cheap, which worked to our advantage because we were just as shockingly poor. In Russia, the only time you could get your hands on chicken livers would be by buying a chicken, which came with all of its entrails and a few feathers here and there, that you’d be responsible in plucking. This rarity, of course, made it sheer delicacy and would be preserved only for the children’s consumption. They would be the ones with the highest nutritional need, and chicken livers are a great source of iron and hemoglobin. 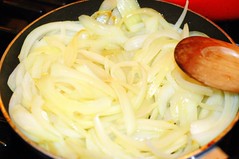 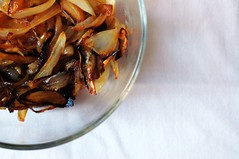 For me, however, chicken livers meant gagging and disgust – it was one of my most abhorred foods. My mother would fry up some onions, dust the chicken livers in flour and salt and fry that up as well. The resulting dish was then placed before me and my mother, standing akimbo in the kitchen over me, would oversee the torturous and seemingly interminable feeding process. I would, of course, eat the onions and then poke around at the liver. The meal would always end in tears, with my mother finally losing her patience and snapping; and me, scared and nauseous, wailing over my plate. 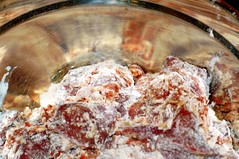 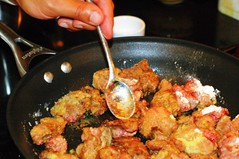 I don’t mean to paint my mother a monster – she certainly was trying her best to make sure I had as much good, wholesome food as possible; and has taught me how to make some of my favorite dishes. I think that I was a very picky eater in my childhood and could pretty much drive the most patient of people crazy. Chicken liver, back then, was my arch-nemesis. 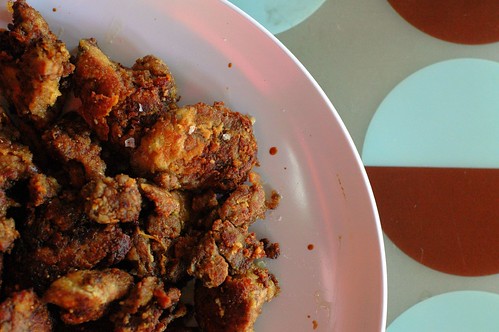 I don’t know when my palate changed and learned to love chicken livers, but it does now. And I was excited to find out when KS and I started dating, that I found another chicken liver fan as well. I showed him how we made it in my family and he turned around and made the preparation even better. His secret, while the chicken livers are cooking, to periodically add a tiny bit of the flour mixture to places that have become “un-coated” with it. The result, a crispy outside, delicately textured, almost buttery taste. Nothing goes better with it than a plate of freshly fried onions, a tiny dash of good balsamic vinegar, and a sprinkling of Maldon sea salt.

1. Rinse and drain the chicken livers. Thoroughly pat dry with paper towels and set aside.

2. Add enough oil to cover the bottom of a large skillet (preferably cast iron) set over medium-high heat, heat the oil until shimmering. Add the onions cook, stirring, until the onions start to change color. Season onions with a little salt, decrease heat to low, and cook, stirring from time to time, until onions are caramelized. This can take anywhere from 20 to 40 minutes. Transfer onions to a plate and set aside.

3. Add more oil to the skillet and return to medium-high heat. While oil warms, combine flour, 1 tablespoon of salt, and pepper in a bowl. One by one, dip chicken livers into the flour mix and shake off excess. Place the livers in the skillet – the oil should sizzle, but not too much. Sear the livers until well browned on all sides and are cooked to medium; a pound of chicken livers will take about 8 to 10 minutes, but it all depends on the strength of the flame of your range. Transfer livers to the plate with onions and serve immediately with a little balsamic vinegar and flaky sea salt.