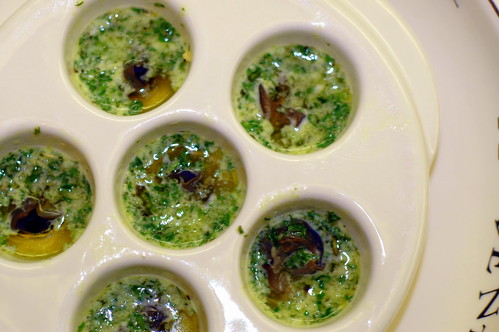 I have often joked about how a key to a great tasting meal is one simple ingredient – butter. Well, I think if anything proves me right, it’s escargots – where I think about 60% of the dish is melted, herb butter. And while my parents shudder at the idea of people eating snails, KS and I are quite content not only consuming the snail part of this dish, but also the garlicky butter that remains thereafter. For that, plenty of baguette slices are perfect sponges – they sop up the fragrant, golden “sauce” perfectly!

We wanted to make this dish for so long, but lacked those fancy escargots dishes. The mere fact that we purchased them, tells you of our immense love for these snails. We have a rule in the kitchen – most items that serve one purpose only are banned. Thus, no bagel slicers or egg cookers – with the humble apple slicer being one exception. But escargots dishes – we were powerless against their draw. And yet, having now made the escargots at home, I’d like to save you all the expense and tell you a less refined, but no less effective or delicious way to make this dish at home. 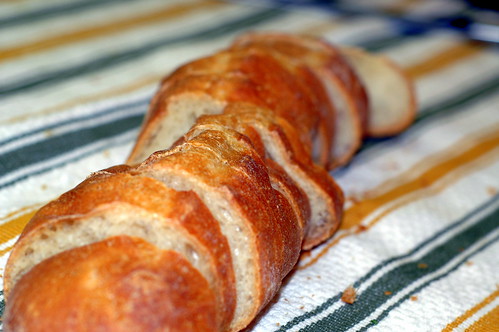 Okay, ready? [The proportions of things are below based on a recipe from 1949(!!!), a time before the evils of cholesterol were discovered, and butter was revered. The paragraph below is just my layman’s instructions.]

Get a oven-proof bowl. Put some snails in it. Put enough of the garlicky mixture to cover the snails and so that when the butter melts, the snails are sort of swimming, or luxuriating, if you will, in the buttery pool. Place dish in the oven for 5-7 minutes according to the instructions below. There, this is the un-fancy, cheap, i-don’t-need-no-fancy-dish-to-make-escargots way. In fact, I have a feeling that the very first escargots were probably made this way. I mean, who had the foresight to design those fancy dishes? There, I just saved you $40 or so on the cookware, though the escargots themselves will run you about $18 a can, but there’s like 60 of them in there – and they don’t keep long.

So run along and throw an escargots party already (you know you want to!)- and be sure to invite KS and me! 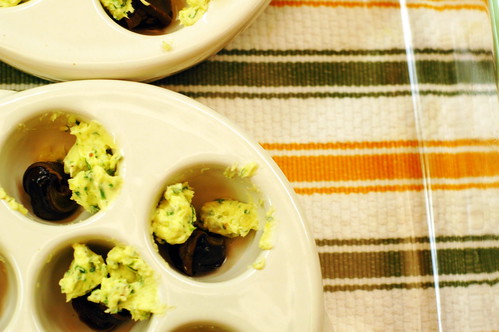 Using a heavy knife, mince and mash garlic to a paste with 1/8 teaspoon table salt.

Divide half of garlic butter among snail shells. Stuff 1 snail into each shell and top snails with remaining butter. Spread kosher salt in a shallow baking dish and nestle shells, butter sides up, in salt.

Bake snails until butter is melted and sizzling, 4 to 6 minutes. Serve immediately.

The escargots can be prepared, but not baked, up to 30 minutes ahead and kept at room temperature until ready to bake.

If you don’t have an escargot serving dish, serve the snails on a bed of kosher salt (to stabilize shells) on a platter.