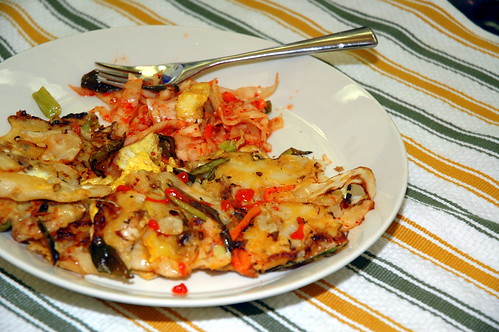 People, it’s been a busy week and it all started on Monday when KS and I attended a wonderful benefit, which was inspirational and motivating. I’ve been asked to try to create a Russia-based branch – so we’ll see if I am successful in launching a Russia chapter. Would be swell!

The other weeknights, tonight included, KS has been galavanting around town for business-related functions, and I (sigh) have been left home alone, forced to fend for myself and cook single portion meals, which could at times be daunting. Well, not this time! 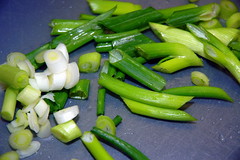 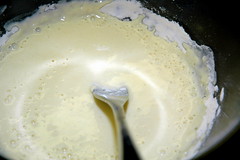 While catching up on my daily food blog reading, I came upon David Lebovitz’ recipe for a Korean pancake. And it looked so good that I resolved to cook it that very evening for my own single-portion dinner.

Except, when it comes to cooking for myself, I am quite shockingly lazy. I mean really lazy. Lazy enough that I had to stand in the kitchen making a mental list of pros and cons of whether or not I should cook this dish for myself. We’re talking about a five minute dish, here. But I was all, “Meh, I have to clean up after myself and I don’t wanna,” and “All I want to do is watch Freaks & Geeks on dvd, not cook and clean up!” People, I mean stupendously lazy. But I was so ashamed of just how lazy I was, that my own self-shame, propelled me to get off my behind and make this pancake. 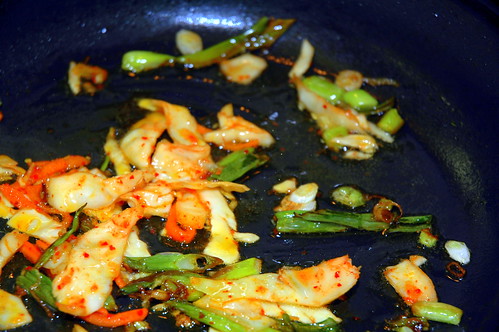 I know that David instructed to let this pancake cool before eating it, but in my book, that just wasn’t happening – I was far too hungry to wait. I ate it warm, drizzled with Sriracha sauce (ok, so not really Korean, but still) and a side of kimchee, which I could eat daily for breakfast, lunch and dinner. And it was heavenly and I was even more ashamed of having even debated making it. 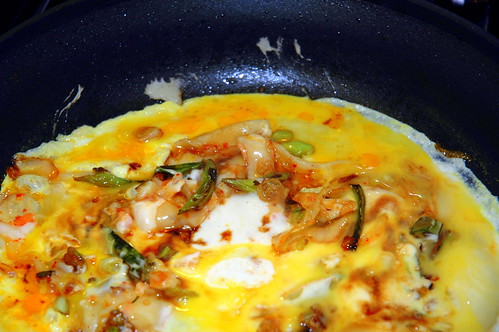 And so, tonight, with KS being out and about again, I am left to my own devices. I have a bunch of scallions left over and a jar of kimchee in the fridge. I think another pancake is in order for dinner. I just hope that I don’t have the same internal laziness debate when I get home – that would be truly embarrassing.

There’s plenty of variations on this recipe and you can certainly make your own up, using some of my suggestions above. I find a non-stick skillet yields best results, but if you use a cast iron, be sure to add enough oil to prevent the pancake from sticking. I use relatively high heat since I want a nice, browned crust.

A large spatula works best for flipping it, although you can slide it onto a dinner plate and flip it that way, or even cut it in half, then flip each piece separately.Next I’m going to experiment using sparkling water, or maybe add a pour of beer in place of some of the water.

1. Stir together the flour, water and salt until just mixed.

2. Chop the green parts of the scallions into 3-inch (10cm) lengths. Reserve the white parts for another use.

3. Heat a thin layer of vegetable oil in a 9 or 10-inch (23-26cm) skillet, preferably non-stick, until hot. Fry the scallions until they’re completely cooked through and soft. Add a touch of soy sauce to the pan when they’re almost done, to season the scallions.

4. If using other ingredients, any vegetables, kimchi, or prawns–what have you‐add them now, then toss a few times to heat them through.

5. Pour the pancake batter over the scallions (and other stuff in the pan), spreading the batter, and cook a few minutes until the bottom is nice and brown underneath. Lift the edge to peek.

6. Pour the beaten egg on top then swirl the pan to even out the egg a bit, still keeping it pretty uneven. Distribute the dried pepper strands over the egg, if using, and cook until the egg is just beginning to firm near the edges.

7. Using a wide spatula, flip the pancake and cook for another minute or two until the egg is set and preferably crispy at the edges. (I tend it cook it pretty well, although I like hard-cooked fried eggs, which I know ain’t “gourmet”, so use your judgment.)

5. Slide pancake onto a cutting board, then cool to room temperature. Cut into six or eight wedges, and serve with dipping sauce made by mixing 3 parts soy sauce with 1-2 parts rice vinegar and a few drops of sesame oil. A bit of chile oil can also be added.

Radish Note: I didn’t have the dried peppers a la David, so I used hot red pepper flakes instead; and I used the white parts of the scallion because I love them so. I also want to try making the pancake with rice flour and see how it tastes. Lastly, my flipping skills