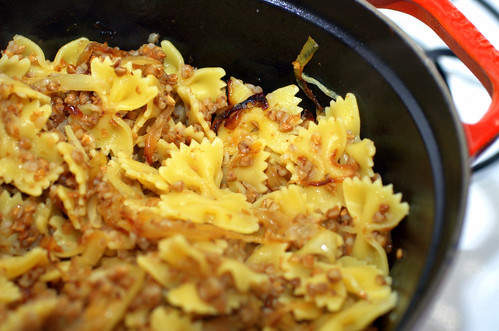 I wish I had a great story to tell you about growing up eating kasha varnishkes, but I don’t. In fact, I had it, for the first time, last year at a Jewish deli and it was love at first bite. And at the time, I didn’t even know it was such a traditional dish. All I was excited about was that there was buckwheat in it and fried onions that, for reasons now known to me (one word, people – schmaltz!) were the best tasting fried onions I could think of. I liked the bowtie pasta, but my fat-loving stomach hinted that egg noodles might have been even better. But there are no bow-tie egg noodles are there? 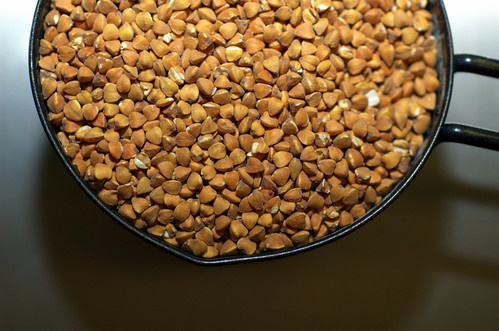 To make a long story short, a couple of weeks ago, Mark Bittman of the Minimalist fame, wrote about kasha varnishkes in the New York Times. And when he mentioned that his grandmother made it all the time, and it was a childhood favorite dish, I made a mental note. Plus he so waxed poetic about schmaltz and fried onions, that the mental note quickly became a full-fledged obsession. Before I knew it, I couldn’t stop mentioning it in conversation as the next thing I was going to cook, and all my Jewish friends, upon hearing about kasha, would recount some childhood memory of theirs that involved eating this dish. Each. And. Every. One. 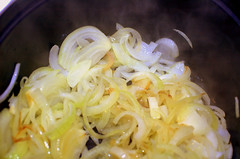 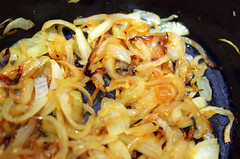 While chicken soup, matzo balls and gefilte fish have all been commonly occurring dishes at home, this one was noticeably missing. When I asked my mother about it, she didn’t even know what I was talking about. My father vaguely remembered something about his dad making it when my dad was a child. My mother claims to have no memory of it. 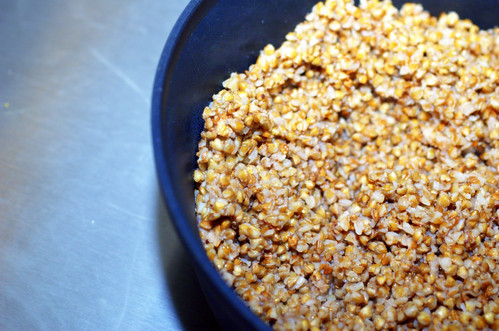 I, however, was not to be deterred from starting my own tradition. And so last week, I gathered all my ingredients, minus the schmaltz, and made it for dinner. I chose not to add schmaltz for several reasons. First, I didn’t have any on hand, and to make it, I would need some chicken fat and I lacked that. Secondly, in my efforts to be somewhat healthy, schmaltz would have thrown all that out the window. Third, I wanted to make something vegans could also make – just in case there are any vegans out there looking for Jewish vegan-friendly recipe. 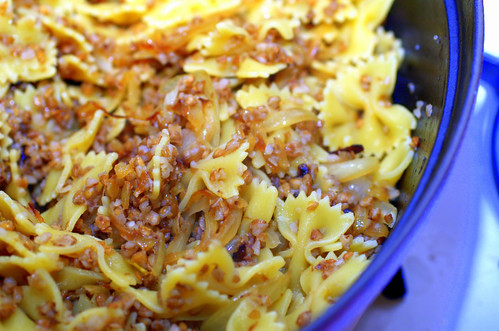 Since I cheated and didn’t use schmaltz, I wanted the oil I used to impart a unique flavor on the dish — and so I cooked with unrefined sunflower oil, which is readily available at most Russian delis. It was amazing – the sunflower oil gave the onions its own special character, and I think I just might continue to make it this way, starting my very own tradition. If you can’t find this oil nearby, try using another type, or use butter to give the dish a richness and unique taste of its own.

1. Put onions in a large skillet with a lid over medium heat. Cover skillet and cook for about 10 minutes, until onion is dry and almost sticking to pan. Add fat or oil, raise heat to medium high and cook, stirring occasionally, until onion is nicely browned, at least 10 minutes or so longer.

2. Meanwhile, bring a large pot of water to a boil. In a separate, medium saucepan, bring 1 1/2 cups water to a boil, stir in the kasha and about a teaspoon of salt. Cover and simmer until kasha is soft and fluffy, about 15 minutes. Let stand, off heat and covered.

3. Salt the large pot of boiling water and cook noodles until tender but still firm. Drain and combine with the onions and kasha, adding more fat or oil if you like. Season with salt and lots of pepper and serve immediately.