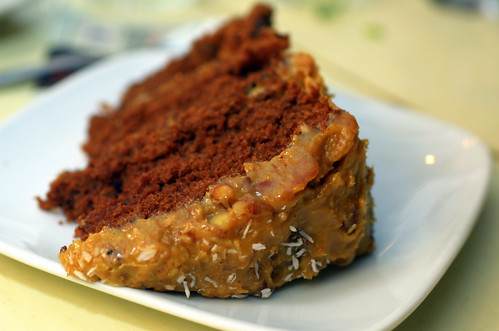 How did this happen again? A full week has gone by since I posted last and it’s been almost two weeks that this recipe has been sitting comfortably in my MT system waiting for me to click publish. And publish it, I did not. A whirlwind of a long weekend in Boston, and then a crazy week left me no time to string two words together, never mind sentences. And boy, was I excited to tell you about this cake! Does the phrase “dulce de leche” grab your attention? See, even now, I just stared a good five minutes at the last sentence thinking, “Now where was I?” 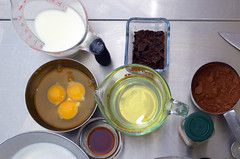 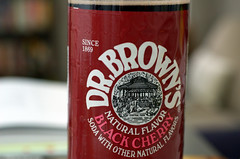 This cake was made for a surprise engagement brunch for two of my best friends, Paul and Sharon who have recently returned from their trip to South Africa, where Paul proposed and Sharon accepted, making them officially engaged (yay!). I was in on the whole thing and kept it so well from Sharon that she totally bought my let’s-celebrate-the -New- Year-belatedly-since-you-were-in- South-Africa-and-we-didn’t-celebrate-together excuse. In reality, Paul, who is very sneaky in the most delightful ways, was planning a surprise brunch for Sharon with the nearest and dearest friends. And the surprise worked – she had no idea. 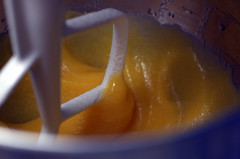 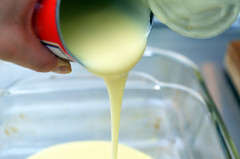 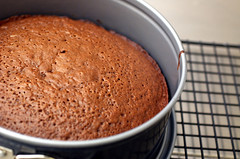 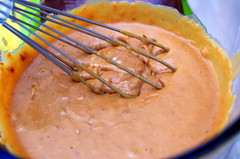 Of course, as soon as Paul let me in on this devious plan, I offered to bake a cake for the occasion. Paul’s only requirement was that the cake would have chocolate – never a poor request. But chocolate cake still left me with so many options. Do I go for the triple threat and make a chocolate cake with chocolate frosting, and some more chocolate tucked somewhere in the middle? Do I maybe opt to have a raspberry filling to accent the dark chocolate batter? 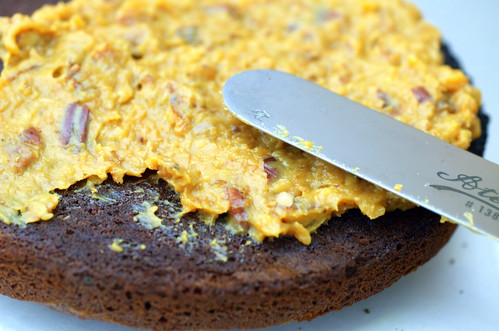 Since I had just made a chocolate peanut butter cake and there was an FDA warning on peanut butter, I thought carefully about my options and decided to go with a chocolate cola cake with a dulce de leche frosting. The recipe, from my new favorite cake book, taunted me for weeks with whispers of decadent things to come and since I leaf through this book practically every night before I turn the lights off and go to bed, it takes Herculean strength not get out of bed and have a piece of toast with Nutella. With will power like this, state secrets will never leave my lips! 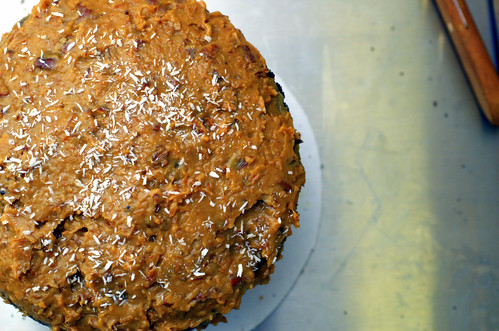 Well, for those of you who like a good nostalgic, Southern-themed dessert, this cake is for you! Flavored with cherry cola, frosted with a dulce du leche frosting with pecans and coconut, this is a rich, chocolatey, powerful cake. It’s intense and decadent and were it not for the fiercely cold temperatures outside, it would make me feel like I’m lounging in Charleston somewhere sipping on sweet tea and fanning myself. 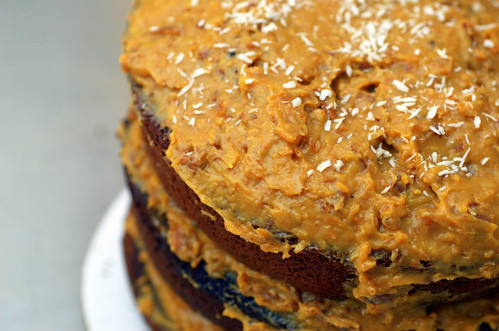 And though this cake is not difficult at all, a couple of notes I learned along the way to steer you along. First, I know the recipe says “sweetened coconut”, but seriously, rich chocolate cake, dulce de leche and sweetened coconut? I opted for unsweetened and it was lovely. Two, the dulce de leche takes 2 hours to make. And then some time to cool. While not a difficult cake, it’ll take a few hours to make and put together, so give yourself enough time. Three, I flash froze the cakes once they cooled off and then frosted them frozen – and gave the cake enough time to come to room temperature to be eaten. Frosting while the cakes are frozen is a lot easier than fumbling about with sticky frosting such as this and delicate, crumbly textures.

And honestly, this cake is so worth the time and trouble because it is just painfully good. Painfully, because as you are eating it and you realize you are full, you’re all-too-well aware that you simply cannot put your fork down and might even have to force yourself to have a second piece, as one of our friends did. If the rest of Paul and Sharon’s life together is as decadent and lush and sweet, then my work here is done.

1. Preheat the oven to 350 degrees F. Butter 3 9-inch round cake pans or coast with vegetable cooking spray. Line the bottom of each with a round of parchment or waxed paper and grease the paper.

2. Combine the chocolate and buttermilk in a double boiler or a metal bowl set over a pan of simmering water. Heat, stirring often, until the chocolate melts, about 7 minutes; do not let the buttermilk come near a boil, or it will curdle. Remove fro the heat and whisk until smooth.

3. In a large mixing bowl, whisk the eggs lightly. Beat in the oil and vanilla. Gradually whisk in the sugar until well blended. Stir in the melted chocolate mixture and whisk until smooth and homogenized.

4. Sift together the flour, cocoa powder, baking soda, and cinnamon. Set these dry ingredients aside. In a 2 or 3 alternating additions, add the dry ingredients and cola to the chocolate mixture, beating between additions. Divide the batter among the 3 prepared cake pans.

5. Bake for approximately 25 minutes, or until a cake tester or a wooden toothpick inserted in the center comes out almost clean. Let the layer cool in their pans for 10 minutes. Then turn out onto wire racks to cool completely, at least 1 hour.

6. To assemble the cake, place one layer, flat side up, on a cake plate or stand. Cover the top with about ¾ cup of the Toasted Coconut-Pecan Frosting, spreading it evenly to the edge. Repeat with the second layer and another ¾ cup frosting. Finally, spread the remaining frosting over the top of the cake, allowing the excess to drip decoratively down the sides.

7. Refrigerate the cake, uncovered for at least 1 hour until the frosting sets. The cover with a cake dome, large bowl or plastic wrap until ready to serve. This allows the moisture to even out and prevents the frosting from forming a crust. Chilling also makes the cake easier to cut, something that’s best done with a hot, wet serrated knife.

1. Preheat the oven to 350 degrees F. On a large baking sheet spread out the coconut and pecans separately. Toast in the oven for 5-7 minutes, tossing the coconut once, until the coconut is very lightly browned and the pecans are fragrant. Transfer to a dish and let the cool. Let the oven on.

2. Spoon the condensed milk unto a heatproof glass baking dish, cover tightly with foil, and set the dish in a roasting pan or larger baking dish. Fill the pan with enough hot water to reach about halfway up the side of the smaller baking dish. Bake for 2 hours, stirring once or twice, until the milk is a light caramel color. Carefully remove the foil with caution, the hot steam can burn.

3. Transfer the caramelized milk to a bowl and whisk until smooth. Stir in the toasted coconut and pecans. Let cool slightly. Cover the frosting with plastic wrap, pressing it directly unto the surface, then refrigerate until cool but not set, 1 to 1 ½ hours.