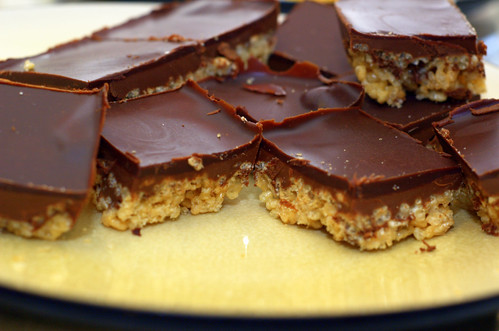 I blame the red wine entirely. A few friends stopped by and two bottles of wine later I realized – dessert doesn’t make itself! But sipping wine with friends is way more fun, no matter how much I love to cook. Luckily, just as a few drinks seem to improve my pool game, a few glasses of wine seem to improve my cooking or, at the very least, make me more efficient. So starting these bars late in the evening worked out just fine. 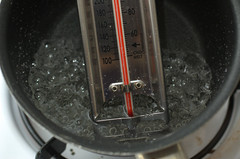 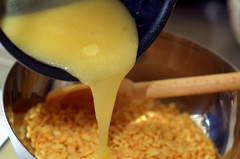 I would think that I should omit even thinking about New Year’s resolutions seeing as I start the first post of the year by mentioning wine. And I know, I’m throwing more sugar your way, but, tasked with dessert, I had to make these, along with other New-Year’s-resolution-unfriendly treats for the New Year’s Eve party at friends’ place in Brooklyn. And really, it’s sort of the last hurrah (almost), isn’t it, because when the clock struck midnight I kind of wanted to put the sugar overload on the back burner and think thoughts of brown rice, spinach, maybe tofu. And I’ve a great recipe on that coming your way, but first, a few thoughts on these incredibly decadent things that contain my two favorite ingredients: peanut butter and chocolate. 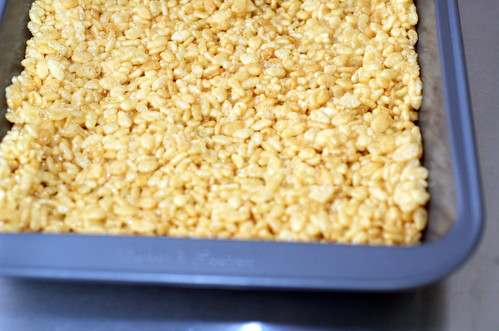 Thought one: I’m glad they’re not in my fridge any longer, but in Brooklyn somewhere because as hard as I am trying to decrease my cookie and candy diet, I wouldn’t stand a chance with these mere yards away. Like Nutella, these can never be made just for home – they’ll have to be brought to others to share because otherwise, you’re just asking for trouble. 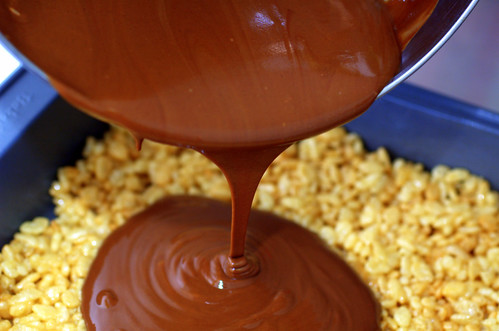 I will also make them again, but tweak a few things. Perhaps add a little cream to the sugar mixture to create a caramel of sorts and give the rice a bit more dimension. I would decrease the amount of the peanut layer – because I found it a bit too overpowering, but tasty nonetheless. I would also cut them into more pieces than the suggested 9 – as I could only eat a small square at a time. 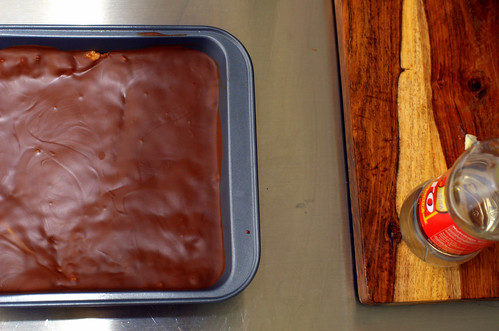 But all in all, these are so good and are incredibly easy to make – and they’re bound to be a hit at any party. This is the first recipe from the Baked: New Frontiers in Baking cookbook that I tried – a book that’s been recommended to me over and over by quite a few people. And after seeing several drool-enducing recipes from it on Deb’s blog, I finally cracked and bought it for myself. Certainly not the last recipe from it, you can expect to see other in the future. And now, if you excuse me, I have to think about what to make for with my wilting carrots (I think I know!) – and I do it a lot better over a glass of cold, red wine.

Make the crispy crust: Lightly spray a paper towel with nonstick cooking spray and use it to rub the bottom and sides of an 8-inch square baking pan.

Put the cereal in a large bowl and set aside.

Pour 1/4 cup water into a small saucepan. Gently add the sugar and corn syrup (do not let any sugar or syrup get on the sides of the pan) and use a small wooden spoon to stir the mixture until just combined. Put a candy thermometer in the saucepan. Cook over medium-high heat and bring to a boil; cook until the mixture reaches the soft ball stage, 235 degrees F.

Remove from the heat, stir in the butter, and pour the mixture over the cereal. Working quickly, stir until the cereal is thoroughly coated, then pour it into the prepared pan. Using your hands, press the mixture into the bottom of the pan (do not press up the sides). Let the crust cool to room temperature while you make the next layer.

Make the milk chocolate peanut butter layer: In a large nonreactive metal bowl, stir together the chocolate and the peanut butter. Set the bowl over a saucepan of simmering water and cook, stirring with a rubber spatula, until the mixture is smooth. Remove the bowl from the pan and stir for about 30 seconds to cool slightly. Pour the mixture over the cooled crust. Put the pan in the refrigerator for 1 hour, or until the top layer hardens.

Set the bowl over a saucepan of simmering water and cook, stirring with a rubber spatula, until the mixture is completely smooth. Remove the bowl from the pan and stir for 30 seconds to cool slightly. Pour the mixture over the chilled milk chocolate peanut butter layer and spread (actually, I found it easier to just roll it around until it coated smoothly, avoiding the risk of picking up any of the peanut butter layer with it) into an even layer. Put the pan into the refrigerator for 1 hour, or until the topping hardens.

To cut: place a cutting board on top of the baking pan and flip onto the cutting pan. Arrange chocolate side up and cut into 16 or more squares and serve. The bars can be stored in the refrigerator, covered tightly, for up to 4 days.