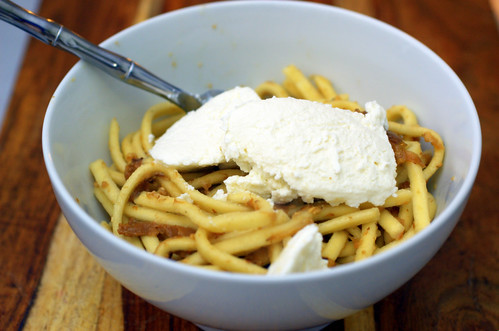 It is still, after 20 years of living in the United States, utterly shocking to me how much chanterelle mushrooms cost. When I was growing up in Russia, they were the one of the cheapest mushrooms around, though we picked most of our mushrooms ourselves. That’s the kind of thing you do in Russia – pick your own mushroom and berries in the forest. It’s a bit cliché and “Sound of Music” but I assure you we didn’t do this with a song. And as for mushroom-picking, I used to be quite good at it too. You had to have a keen eye, discerning one brown thing from the next, a twig or a leaf sometimes was hiding a beautiful porcini or a cremini mushroom. And as for chanterelles, you could see their bright yellow tops a mile away.

I also had memorized names of all the mushrooms and how they looked and how to tell their poisonous look-alikes from the real thing. I’ve forgotten most of it by now, but with the chanterelles, my favorite childhood mushroom, I still remember. Should you find a chanterelle mushroom that has worms inside, it is a fake. Apparently, real chanterelle mushrooms are repugnant to worms. Now, that may have been an old wives tales, but even so, would you want a wormy mushroom? 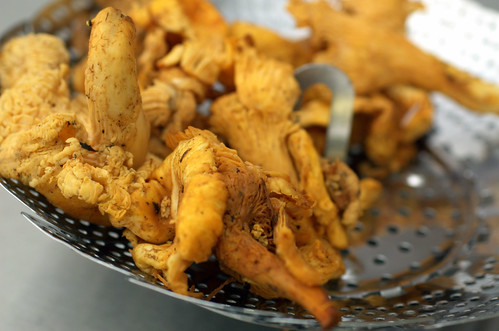 Regardless, the chanterelle is a pretty fabulous thing, if you ask me. It smells of earth and moist woods and moss and when cooked, it makes the most humble meals glorious and worthy of a special occasion. And this dish, which I slightly spruced up with some fresh ricotta (I really just couldn’t resist it!) was an absolute favorite thing of mine to eat when chanterelles were in season. And ridiculously simple too! 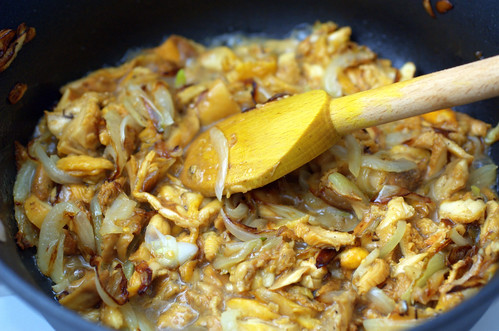 You simply sauté some onions and shallots, add to them the chanterelles and let that cook until reduced in volume (mushrooms shrink when cooked) at which point you add a dollop of sour cream (what dish in Russia goes without?), mix it all in, and then stir it into freshly boiled pasta. It sounds simple and pedestrian, though it’s anything but – and you just might finish the whole dish by yourself, so for your sake, do invite some guests over. This could be one fancy dinner party!

Pasta with Chanterelles and Fresh Ricotta

Ingredients:
1 lb pasta, preferably angel hair (but I was out and had to use the thicker kind)
1/3 lb fresh chanterelles
1 medium onion, thinly sliced
2 shallots thinly sliced
3 tbsp sour cream
Salt and pepper

In a large pot, boil water and cook pasta, and in the mean time cook the mushroom combination. Time it so that the pasta is ready when the mushrooms are.

In a large skillet, over medium heat sauté the onion and shallots until they begin to caramelize, about 15 minutes, stirring from time to time. Add the chanterelles and cook them until the reduce in size, about 10 minutes. Season with salt and pepper.

Stir in sour cream and take off the heat. Serve over pasta with a dollop of fresh ricotta.