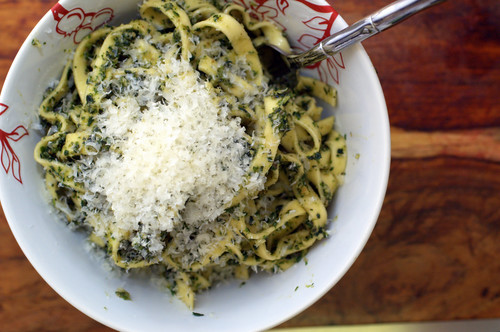 It should by now not strike me as unusual that things we barely paid attention to in Russia are considered a delicacy in America. Sorrel leaves were the cheapest greens at the market. Chanterelles were considered pedestrian, no matter how delicious. Gooseberries were easily the cheapest berries you could find – and in the US they’re quite a treat. And then of course there were stinging nettles. They grew everywhere, much like weeds. Around apartment buildings, in ravines, in nearby fields. In fact, as a child, I was often covered in an itchy rash from stinging nettles. From time to time, my grandmother would go out and with a towel, pick a bunch of nettles and make them into a soup. In fact, stinging nettles was something you ate to pinch pennies, it was one of those things – delicious, yet somehow indicative of poverty. I didn’t really think about it much while I was young, but I remembered stinging nettles after we arrived to the US and couldn’t find any in the store or at farmers’ markets. 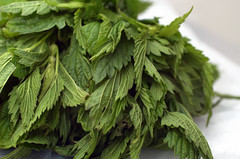 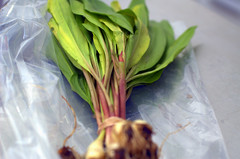 I suppose stinging nettles have become somewhat en vogue recently because I’ve been seeing them on menus and at green markets everywhere. Maybe it’s always been so and I haven’t been noticing, but it seems to me like suddenly, stinging nettles went from being the girl no one wanted to take to the dance to the girl pronounced them homecoming queen. Humble, unapproachable, homely stinging nettles – suddenly glamorous! 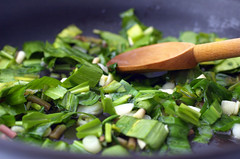 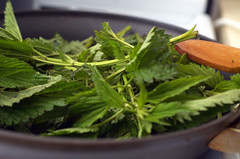 I would have shared this dish with you sooner, but I thought the stinging nettles season was over and so this dish was going to go into my computer’s oubliette for a few seasons. But I heard through the bloggy-grapevine that stinging nettles were still abundant at least in Union Square market and so wanted to share this recipe with you as soon as possible. 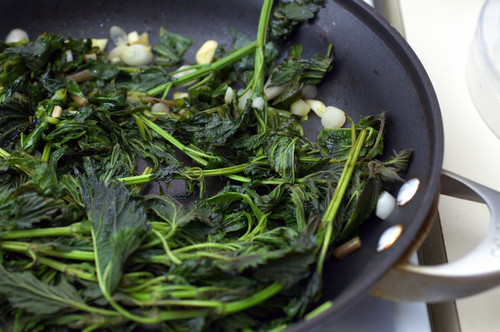 I had a version of this dish at one of my favorite restaurants, Hundred Acres, on the first night of Passover of all nights. And guess what – it was in a pasta dish (I can see my parents shuddering as they read this bit) as pasta is probably the most anti-Passover food out there. But I was sad that night, because I couldn’t go home for the holiday, meanwhile my dad was sick, my grandmother – deteriorating. And here I was, feeling mopey on the eve of a family holiday, without family in the city to celebrate. Friends who know me well know that I rarely feel homesick, but on that night, I felt very lonely in a city where I feel very much at home. And to cheer myself up, I decided to take myself out to a nice dinner. I just happened to be walking past Hundred Acres – clearly I was meant to dine there that night. 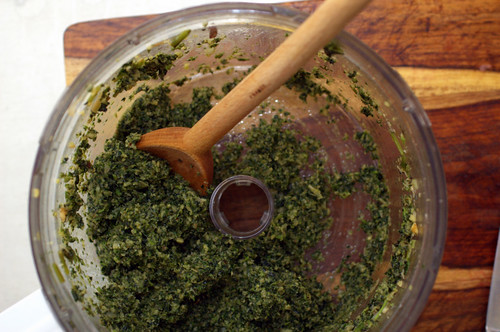 Its simplicity and comfort of this pasta dish struck me as exactly what I needed that night. Even though it was as far away from a Passover-appropriate meal, I didn’t care. Passover is a tale of exodus, and a people’s search for home. And I, quite desperately, needed to feel a sense of home that night, at whatever cost. I wanted simple, hearty, homey – and this pasta offered it all. Not to mention as soon as I saw stinging nettles, my decision was even easier. 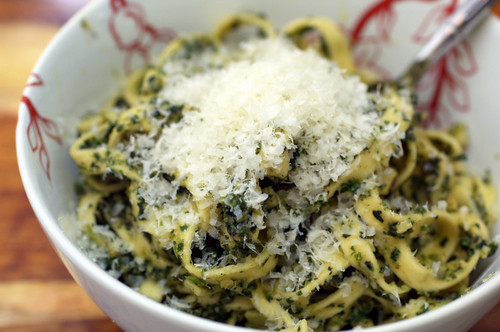 The next opportunity I had, I bought stinging nettles at Union Square market and tried to recreate this simple, yet amazing dish at home. And wanted to share it with you. Because to me, this pasta brought a little piece of home, in so many ways: the comfort and weight of fresh semolina pasta, the childhood stinging nettles, fragrant coating of olive oil, a sharp bite of grana padano. What I realized that night is that a delicacy need not be a fancy thing – it is the thing that makes you feel indulgent and wrapped in comfort, be it a common food or a fancy one.

You’ll note that I said nary a word about ramps, thus totally neglecting them in the write up. Nettles, while lovely, aren’t necessary here and I added them for depth, which you can certainly omit. Given how short a time span ramps are present at farmers’ markets, there’s little opportunity during the year to make this pesto as is. Plus the restaurant’s dish didn’t have ramps – those are my addition entirely.

Also, at some point, you’ll need to cook your pasta. I’ll leave it to you to decide when, during the making of your pesto, you want to do that.

1. With rubber gloves, so your hands don’t come in contact with stinging nettles, wash the nettles and trim their ends and any wilted rotting leaves you might find. Set the nettles aside. Remove the gloves.

2. Heat a glug of olive oil in a skillet over medium heat.

3. Wash ramps carefully and thinly slice them. Add ramps to the oil and saute slowly.

4. Once ramps start looking more translucent and wilted, put the gloves back on and place the nettles on the pan on top of the ramps. Decrease the heat to low and cook until nettles are wilted and turn a darker green.

5. Remove from heat and spoon the nettles & ramps into a food processor. Throw in the walnuts. Add a few glugs of olive oil and start pulsing until the mixture resembles the consistency of pesto. How much oil you add depends on you and how thick or thinnish you like your pesto. There are no rules. This is merely a guideline.

6. Mix as much pesto as you need for however much pasta you are making. I had enough for 6 servings or so, but again, depends on how much pesto you wind up making. Top very generously with Grana Padano. The sharper the bite, the heartier your pesto dish will taste.