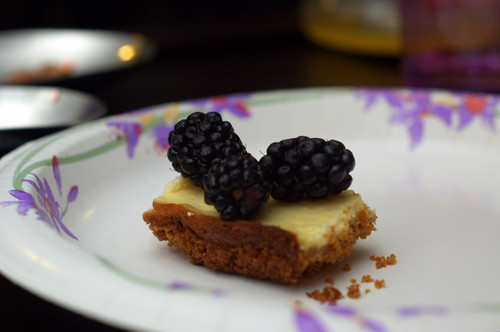 I cannot believe how long it’s taken me to tell you about these cheesecake squares. I mean, please don’t be mad, but it’s been almost two months. While I thought that this summer will be a leisurely season for me to cook and lounge, I could not have been more wrong. Aside from summers being typically full of parties and picnics, I managed to get myself in a tizzy over a move. 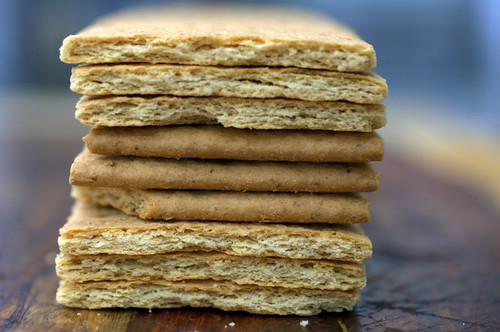 You see, and now that I’m in a fabulous new apartment I can speak freely: my former landlord tried to raise my rent, then lowered it by a laughable (and I mean, laughable amount and then proceeded to ignore my attempts at communication (that’s five unanswered voice mail messages) only to drive me irreversibly annoyed. And once I get annoyed, it is on! I decided that leaving all the power in unresponsive landlord hands was not my style (I am not one to sit and passively observe) and found an apartment that delivered everything that my current one did, and then some: an elevator, built-in air conditioning, ample closet space, laundry on each floor, a dishwasher (swoon!) and a kitchen that made me weak in the knees from the moment I saw it. Not to mention, it was simply bigger. Much bigger. If there was ever love at first sight, this was it. 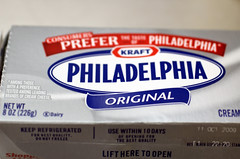 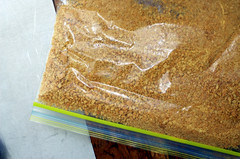 And so, I spent a good chunk of July packing and then unpacking. In fact, a mere two week after my move, I only have one box sitting by the entrance. I’d say, without giving myself too much credit, I did fairly well. So, while I had all the best intentions to tell you about these amazing cheesecake squares, I didn’t just want to post the recipe along with pictures and a single missive – just go and make these – now; I wanted to tell you the most important part: the crust. 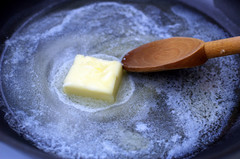 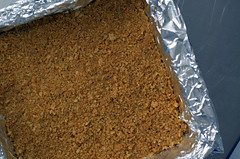 Be warned – making this crust is a dangerous thing, indeed. Dangerous, because as you start melting the butter with the graham cracker crumbs, you will have a formidable urge to take the entire pan, walk over to the couch, and devour the the crumbs alone scrapping the whole cheesecake endeavor. Such were mine temptations and I was strong enough to resist. But I will tell you, it was a tough choice. Of course, seeing as I promised to bring a dessert to a party, and initially promised cheesecake lollipops. But, a week prior I managed to sustain multiple stress fractures in my foot from running, so schlepping to a store a few block away all to find lollipop sticks was challenging. Hell, walking two flights of stairs in my former walk-up of a residence was a challenge, never mind traversing a few blocks. So I negotiated with my friend – cheesecake, but not quite of the lollipop variety. 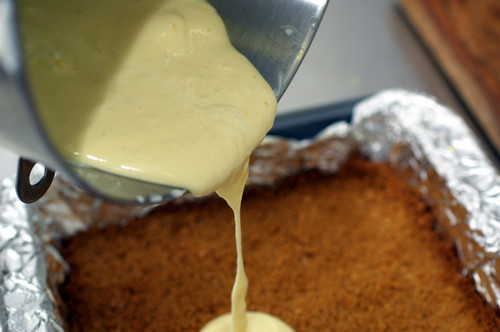 Apparently, cheesecake seems like an intimidating thing to make. But this recipe – really, couldn’t be easier. The whole thing came together in no time at all. Which was lovely, since I hopped about my kitchen on one foot and longed to sit on the couch instead. I’m pretty certain that it would go even faster should decide to use both feet for this endeavor. Unless, of course, you like a challenge. 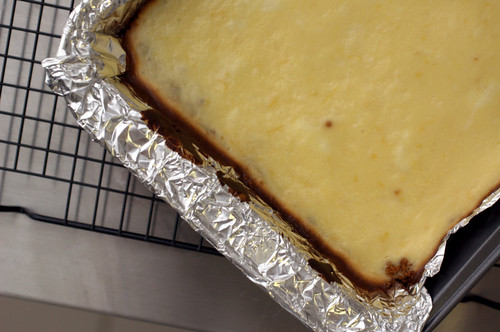 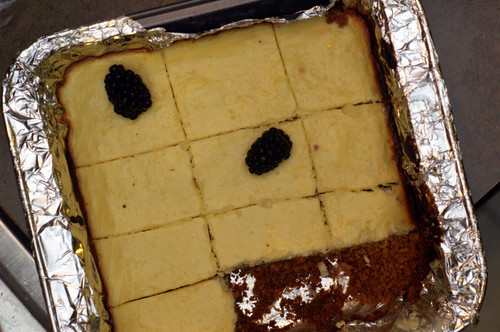 2. Bake cheesecake until slightly puffed and set in center, about 30 minutes; cool completely in pan on rack. Chill cheesecake until cold, at least 2 hours. DO AHEAD Can be made 1 day ahead. Cover; keep chilled.

3. Using foil overhang as aid, lift cheesecake from pan. Cut into 16 squares; arrange on platter. Top each square with berries. Chill until ready to serve, up to 3 hours. Serve chilled.