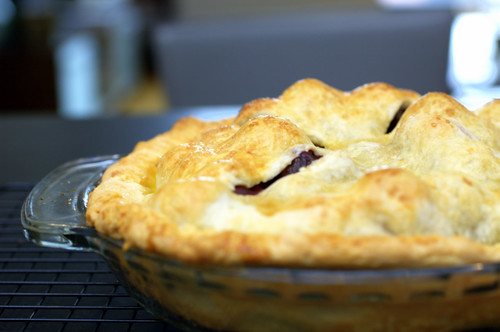 Move over, apple pie, you’ve got serious competition as far as I’m concerned. I know I once pledged my undying love for you, but that was before cherry pie and I had made acquaintance. I really didn’t expect it to be this good, but I must say, I’m over the moon here. 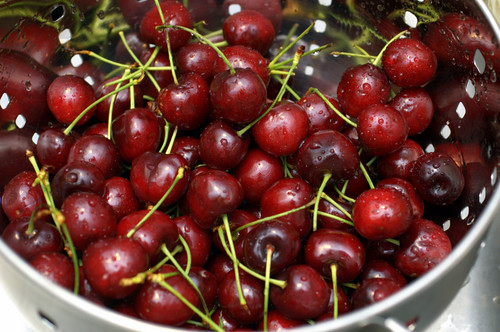 Granted, sour cherries is really where it’s at, but I missed the sour cherry season, because while other folks were busy making sour cherry treats, I was busy looking for an apartment, then packing, then moving, then unpacking. And by the time I pulled my baking gear out of boxes, sour cherries were gone, done for the season, and instead these sweet ones were all over the place. 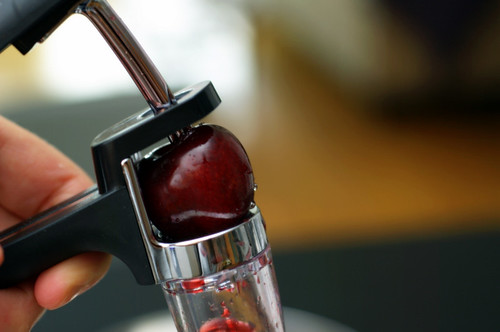 Not to be deterred, I decided to give these sweet cherries a whirl in a pie. And to up the ante further, I picked the hottest, most humid of days to do so. Yes, I like an extra challenge, why do you ask? 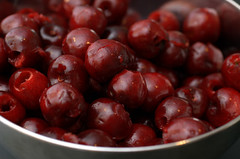 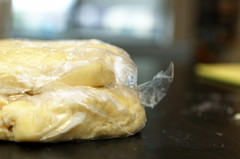 I’ve written about my thoughts on making a successful crust here, but I’d like to reiterate the cold factor one more time. It’s incredibly important to achieve a flaky crust, but in summer weather when you have 100% humidity and 90 degree weather, cold should be the manifesto with which you set out to make the crust. I kept my rolling pin, bowl of flour and butter in the freezer for this to make sure I kept my ingredients as chilled as possible. My one gripe is that butter, when kept in the freezer, will crumble under the knife, instead of making perfect little cubes. I’m a sucker for those perfect little cubes – even if they’re seconds way from being blended with the flour into pea sized bits. 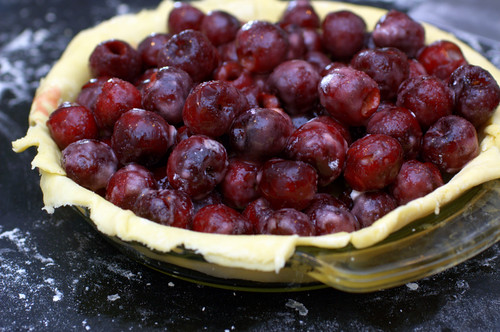 A few years ago, I attempted a pie crust on what turned out to be the hottest day in all of the summer season. And you know, that totally scorched me. I couldn’t come near a pie crust recipe, let alone try and measure out my ingredients. All, I want to say here is that if I conquered my fears and delivered, in this pie, my most successful, flakiest crust to date (and it was anti-crust weather), you can do it too. Just work quickly with determination. Like I said in my latest pie post, pie crust smells fear – and you are stronger than the pie crust! 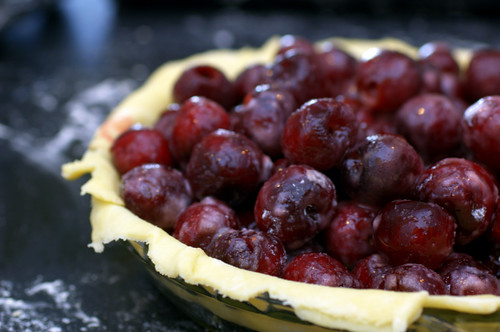 I loved the filling idea from Deb at Smitten Kitchen and so adapted it for the pie here. But I stuck with the sweeter version of my usual pie crust, which I wrote about when I made the Honey Bourbon Caramel Peach Pie – it’s the same pie crust as you might find in many books, but with two teaspoons of sugar instead of the usual one. 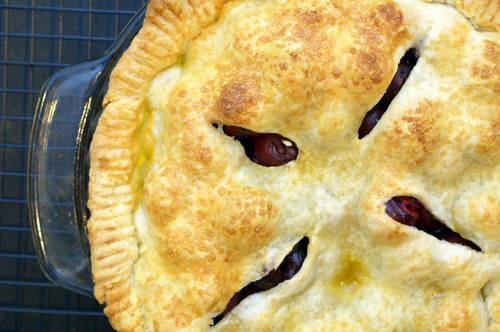 So while the cherries are plentiful and inexpensive and we still have a month of summer left, find the time for this pie – if you make your crust in advance and chill it, it’s a cinch – and a delicious one at that. 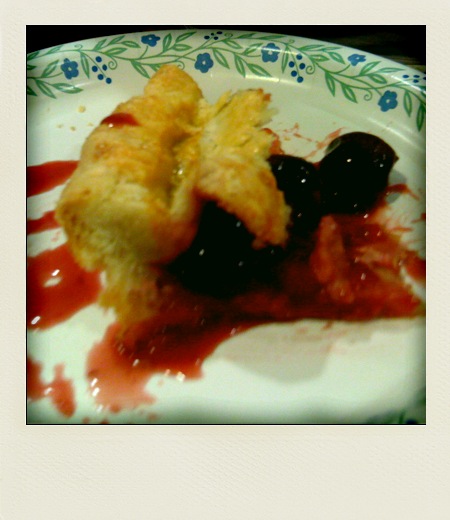 Filling Ingredients:
4 cups pitted fresh cherries (about 2 1/2 pounds unpitted)
4 tablespoons cornstarch
1/2 cup sugar (or more if your cherries are on the tarter side)
1/8 teaspoon salt
Juice of one lemon
1/4 teaspoon almond extract

Roll out half of your pie dough (be sure to pre-chill it first according to instructions) on a flour surface to a 13 inch round. Don’t worry about it not being perfectly symmetrical – these things happen. Gently, fold the “circle” in half, and fold that half in another half (in other words, a quarter) and transport it to the pie pan (should be 9 inches). You can also roll your dough around the rolling pin, but I find the first method easier. Trim the overhang to half-inch width.

Gently spoon filling into pie crust, being careful to keep the liquid that’s formed at the bottom of the bowl from seeping into the spooned filling.

Roll out the second dough disk into a 12 inch round (be sure to keep your work surface floured). Place it over the cherry filling and trim the overhang to 1 inch. Fold the overhang under the bottom crust, pressing the edge to seal, and then crimp the edge with a pastry crimper or a fork.

Brush the egg wash over the crust and sprinkle with coarse sugar.

Cut slits on top of the crust using a paring knife and bake the pie in the middle of the oven for 25 minutes. Reduce the temperature to 350 degrees F and continue to bake for an additional 25-30 minutes, or until the crust is golden.

Remove pie from the oven and let rest on a rack until cool.