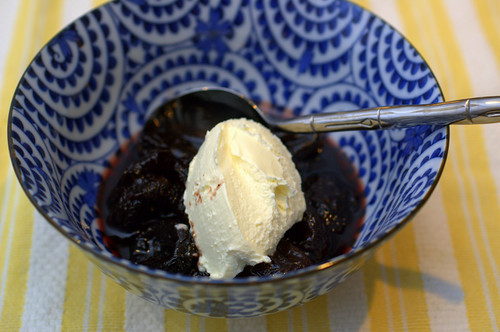 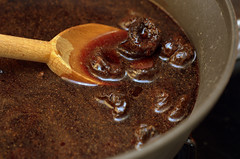 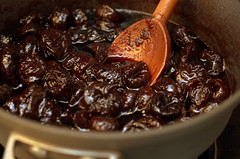 I know it seems perfectly unbelievable that something as, um, boring as prunes can go from Cinderella to belle of the ball in forty-five minutes flat. I would’ve never even considered it were it not for a recent meal at Frankie Spuntino, one of my all time favorite haunts, a place considered by some as the most important restaurant in New York City. 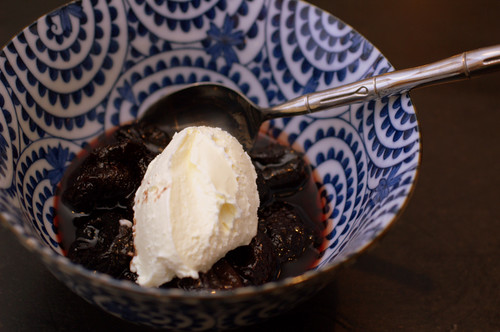 Usually, I am too full to look at dessert, but last time, I wanted to see what the offerings were and let me tell you, I’ve been missing out! These red wine stewed prunes topped with the creamiest of mascarpone around, was about the most stunning dessert I’ve had in a long long time. Its simplicity is what astounds me the most. 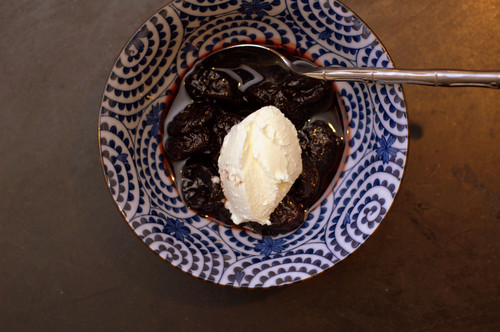 Luisa waxed poetic about them some time ago, and I’ve had the New York Times recipe bookmarked for ages (and yet never made the connection!) and I suppose it’s time for me to throw my hat in because these are incredible! The dessert is both comfort food and haute cuisine. Something about the thickened, reduced wine, infused with nothing more but sugar and two cinnamon sticks with prunes that absorb these flavors, takes you from pedestrian to decadent. And as we are very clearly entering fall season, eating this at the end of your meal is just about the coziest, most lovely thing you can do. Like pulling a nice woolly sweater over your head and just settling into the fuzzy warmth. 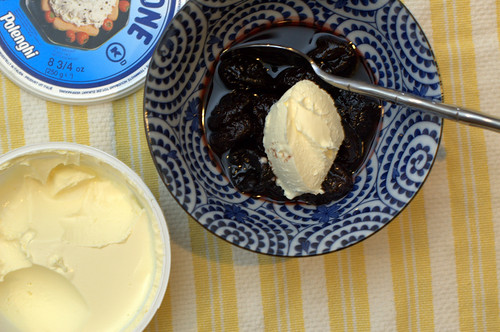 And though I know we’ve been cheated of a proper summer, I am welcoming fall with open arms. When at the end of a long day, I can sink into my couch holding a bowl of these prunes in my hands, I don’t even think of shorter daylight hours or the sweaters I’ll have to eventually unearth. This alone will be enough to carry me through the darkest and coldest of seasons. And I hope it does the same for you.

1. Combine prunes, sugar, cinnamon and wine in a pot over medium-high heat. When mixture boils, reduce to simmer and cook 45 minutes, until liquid has turned to syrup.

2. Remove from heat, and rest at least 15 minutes. Spread a mound of mascarpone on each serving plate, top with 6 prunes and drizzle with syrup. Serve immediately.