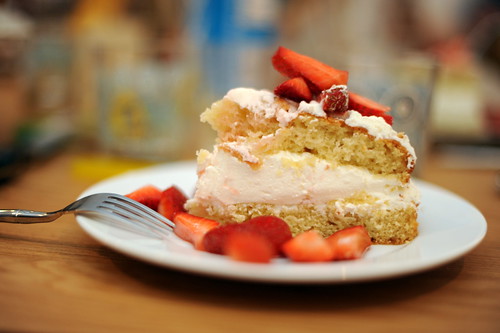 I’m torn whether to write to you about my thoughts on cake or spring. Both are tempting. Both are presently on my mind. Both are worthy of discussion. And both are things I love and can’t get enough of. 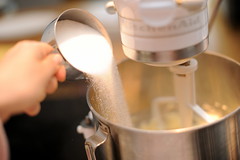 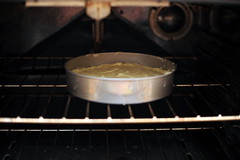 I mean, who doesn’t like cake or spring? Especially a well-made cake and spring that arrives after a seemingly endless and bitterly cold winter. Almost overnight flowers are blooming and trees are covered in green fuzz and I’m wearing a sun dress. And I kinda like it. I could easily get used to this. Now, cake… Cake is big in my book. People who don’t like cake, or say they don’t like cake (do they even exist?) – I have to do a double-take because, come on, really? Cake? It’s like saying you hate puppies. Or rainbows. 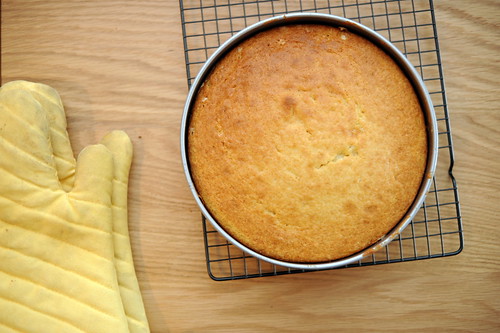 I think the concept of cake is a marvelous, beautiful thing. It’s the kind of thing that just sounds festive, even if it’s an everyday kind of a cake. In fact, I think the word “cake” should come with a mandatory exclamation point. Like this – cake! There, doesn’t that sound so much more celebratory and decadent? Of course, when you are dealing with things like heavy cream, mascarpone, berries and sherry – decadent is really the only way to describe it. I like to be decadent before a somber mood sets in – like a Sunday supper before Monday morning sets in and it’s business as usual. 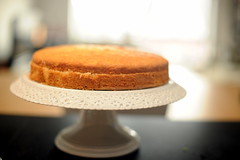 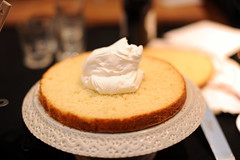 I’ve been trying to do this Sunday suppers thing with a few friends, and they’re kind of getting used to it and ask what’s on the menu next week. They come over with their kids and we eat and laugh and drink wine and then the kids have a dance-off like you wouldn’t believe. I think it’s partly because they’re so hopped up on sugar and that wee-bit of sherry in the cake, but whatever it is, they have some moves, people! They even try to trash the room like rock stars! 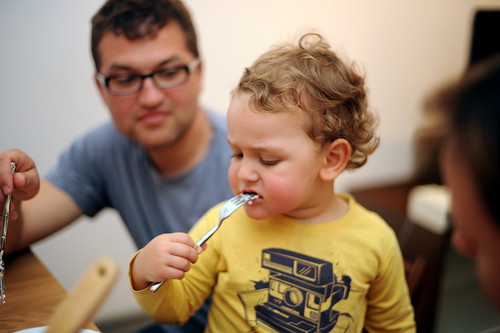 But cake, dear readers, is a thing either done right or wrong. There’s no such thing as an okay cake. It’s not worth the indulgence unless it really, truly, is fantastic. Either you take a bite and your eyes roll upwards toward the heavens in ecstasy, or you think to yourself, “Eh, cake.” Notice, how lack of the “!” just dampens the whole experience. What you want, what would change everything, of course, is taking that forkful to your mouth and mere seconds later proclaiming, “Mmmm. Cake!” 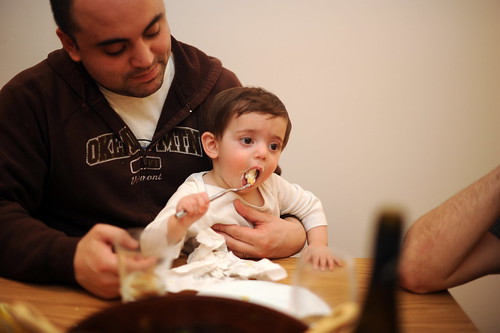 So many things could make a potentially stunning cake a mediocre one. Either the crumb is too dense, or the frosting too sweet, there’s too much of the frosting on the cake, or something. For me, the danger almost always lies in the amount of sugar that a cake contains. I prefer my cake to be a bit restrained on sweetness. Imagine, if you will, movies that queue dramatic music at particularly poignant parts. That always makes the experience less powerful for me. Letting me figure out that critical moment of heartbreak, without a musical nudge – is where it’s at. Cake and sugar – are sort of equivalent for me analogy-wise. 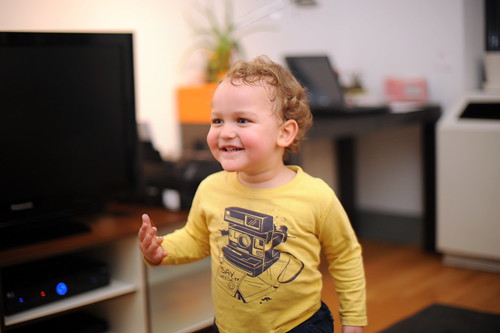 Which is why I was delighted that this cake had it all – light, moist crumb; delicate and lush frosting; and a tang of berries sweet and full of juice. My friends and their kids loved it as well. And they are very picky dessert people. There was even competition for who gets to lick the mixer whisk – which, in my book, is the highest of praises – no one volunteers for this job if the frosting is bad. In the end, everyone had nothing but praise for cake – even those at the table normally skeptical about dessert. My favorite part – is how simple, unfussy, and unpretentious it is. The cake looks downright messy and that’s part of its charm. I dare anyone not to like it. Especially if flowers are blooming outside. And there are rainbows. And puppies. But even without them – how could you not? After all – it’s not just cake – it’s cake! 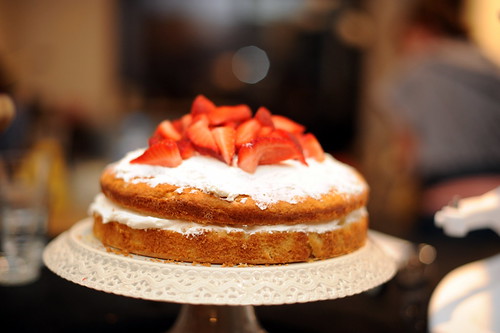 Cake:
With a baking rack positioned in the middle, preheat oven to 350°F. While the oven is preheating, butter a 9-inch round cake pan with 2-inch sides and line its bottom with a round of parchment paper. Butter the top of the parchment paper as well.

In a medium bowl, sift together the dry ingredients: flour, baking powder, baking soda and salt.

With a mixer, in a large bowl, cream the butter and sugar, beating until the mixture is pale and fluffy. Add vanilla and beat in. Add eggs 1 egg at a time, making sure each is well incorporated after each addition. Turn the mixer speed to low and beat in buttermilk until combined. In 3 batches, add the flour mixture, mixing until just combined. Be careful not to overmix or you will get a dense crumb.

With a spatula, spread batter in cake pan and smooth out the top. Give a few light taps as to eliminate the air bubbles.

Place in the oven and bake fora bout 35-40 minutes, until cake is golden and when tested with a toothpick or a cake tester inserted come out clean.

Cool cake in pan on a rack 10 minutes, after which run a dull butter knife around edge of the pan to loosen the cake. Gently invert cake onto a plate. Remove parchment paper and reinvert cake onto rack to cool completely.

Macerate berries:
If using strawberries, wash, dry and cut them into quarters. Wash and dry berries like raspberries/blueberries, but obviously, don’t cut them. In a small, heavy-bottomed saucepan, bring Sherry and sugar to a boil, stirring until sugar has dissolved. Put berries in a bowl and pour hot syrup over them. Toss gently to coat berries and let stand for about 15 minutes.

Make cream:
You’d be best served with a bowl that’s been hanging out in the freezer for awhile – I just take my mixer bowl and put it in the freezer for about an hour. Beat mascarpone, cream with sugar in this large, chilled bowl using cleaned beaters until mixture just holds stiff peaks. Cold bowl – lovely whipped frosting. Which means, of course, heavenly cake.

Assemble cake:
Halve cake horizontally with a long serrated knife. Carefully remove top half and set it aside. Put bottom half on a plate, then spread evenly with all of cream and replace top half. Serve with berries on top.