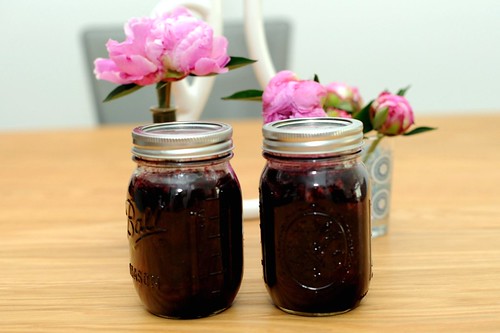 I’ve been a bit of a hypocrite. I’ve encouraged you to go to your kitchens unafraid and undeterred, while I have been harboring a few fears of my own. I suppose it’s only natural to be intimidated by something unfamiliar, to be so wholly overwhelmed you don’t even know where to begin. So while you want to try, you never quite get around to it. Fear wins – you lose. It’s a bit silly, if you ask me. 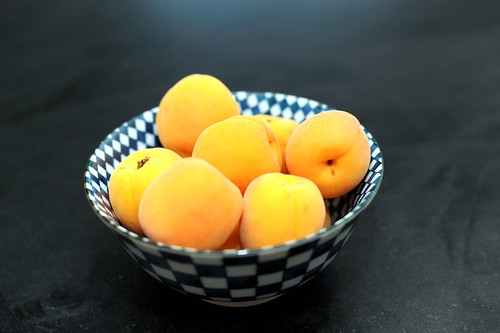 But what is it we’re really afraid of? What is the worst possible thing that could happen? Your creation is a fail. An epic, larger-than-life, inedible fail. Well, for those moments, when you have burned your dinner, or under-baked a cake, or overworked you pie crust, or produced the saddest, most deflated meringues the world has ever seen – it’s always good to have the makings of a peanut butter and jelly sandwich; some heavy cream, a whisk, a chilled bowl and berries; some frozen puff pasty on hand, and a box of your favorite cookies, to remedy the situation. But failure in the kitchen also lends itself to an opportunity to laugh heartily at what went wrong. Last summer, I served the book club ladies the most vile clafoutis known to man. I, thankfully, had another dessert on hand, but it was quite funny – the clafoutis – it looked liked vomit. Another time, I tried to feed them barely edible bread pudding (again, I had another dessert on hand). That second time, I just showed them the finished product and promptly dumped the whole thing in the garbage. 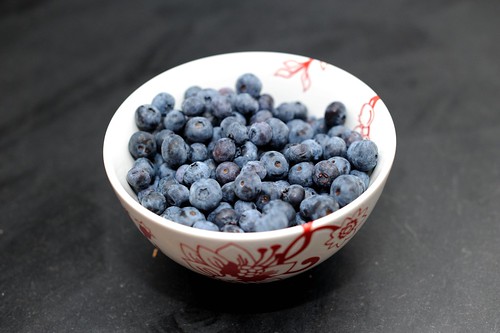 And aside from the pie crust fear (a fear I successfully conquered) nothing else has given me anxiety like canning and pickling. And now, I can tell you, this bête noire has, largely, been put to rest. I don’t know what it is about canning that used to (used to! see, past tense!) make me so nervous. Maybe it was just the steps: the hot water (painful burns!); the cans themselves (where to get canning jars?); the receptacle that allows you to easily (and safely!) place and remove the jars from the boiling water; the “do-i-boil-the-tops-of-jars” dilemma (yes!); how much space on top do I need to leave before sealing (about a quarter inch!); is pectin necessary (no, just cook to 220 degrees F); and so on and so forth. For some reason, preserving was my boogey man. 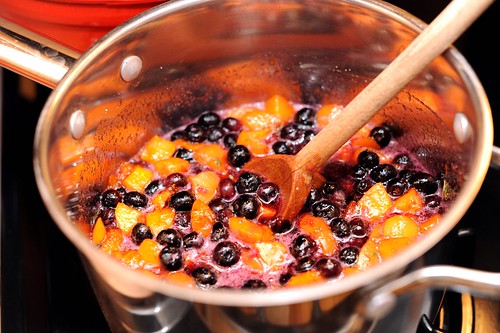 When I mentioned my preserving anxieties to my friend Jennie, she wasted no time and put me in touch with the lovely folks at Ball jars, who promptly sent me a canning “Discovery” kit. The kit came with 3 jars, a basket in which you place your jars, for easier manipulation, and a recipe booklet. And since I now had all the necessary tools to make jam, all I needed to do was actually just make it. I picked up some blueberries at the farmer’s market and found apricots at my local grocer. I hadn’t intended to put them together, but when I laid out my produce on the counter and was putting everything away, the combination struck me as somewhat curious. What I wanted here was something slightly unusual, surprising even. Thyme seemed like a good addition that would highlight the fragrant fruit and offer an herbal note to a nose full of fruit. 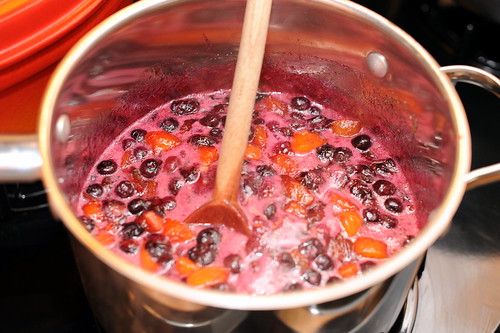 Jam-making does not require crazy measuring, and it’s pretty difficult to mess up. You chop up your fruit, sampling here and there along the way. You place everything in a nice heavy bottomed pot. You want your pot to be as wide as possible because larger surface area allows your jam to become more jammy faster. The greater the surface area – the more moisture evaporation taking place. Simple physics, really. 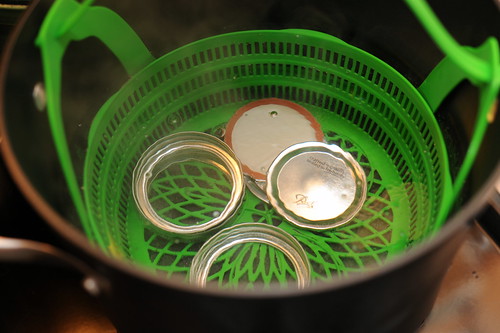 Once the fruit is in, you add your sugar. Personally, I don’t like to overdo it with sugar. You are, after all, making jam – not candy. At the same time – skimp on the sugar and your jam might not set properly. Add your herbs, or vanilla, or whatever that extra element you want. If you just want fruit and sugar, no problem! If you want to add a little lemon juice, that tends to make the fruit sing – go for it! And then, and this is important here, you want to add a pinch or two of salt (depending on how much fruit you’re working with). Once you’ve done all that, turn on the burner, bring the whole mess to a simmer, skim the foamy parts, and let the fruit cook slowly, stirring on occasion. I prefer to bring my fruit to 220 degrees F and not add the pectin. 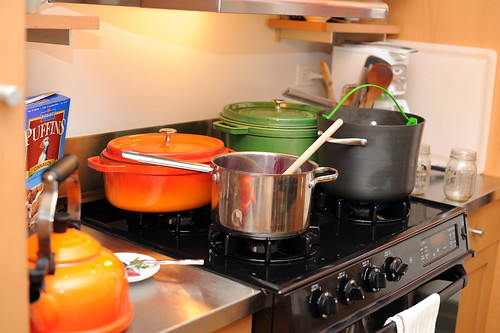 Some fruit, such as the cranberry, has a lot of natural pectin – which explains why your cranberries becomes jelly-like so quickly when you cook them down. Other fruit, like stone fruit, does not have a lot of pectin, so you either cook it to a proper temperature without pectin, or you add pectin, which comes in powder and liquid form. Either way, you are looking for that point in time when you drip a little jam onto a plate and instead of it spreading out in a messy puddle, the drip holds together a bit, bound by that viscosity that forms when you cook fruit and liquid for some time. 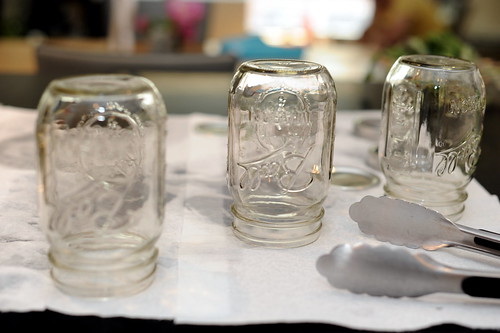 When that done, you sterilize your jars, making sure they are dry. You sterilize the tops of the jars and the rings too, in case you’re wondering. Then you fill up your jars with the jam, leaving a quarter inch of room on top, place the lids on the jars, and screw on the rings, but not too tight, just enough. After awhile, you should hear a click or a pop, that’s your jars sealing themselves. No sound? Top of the lid still pointing upwards? Press the lid downward gently. If it collapses and doesn’t come up – voila! You have sealed with success. If it pops right back up, you might want to re-sterilize and start the process anew. 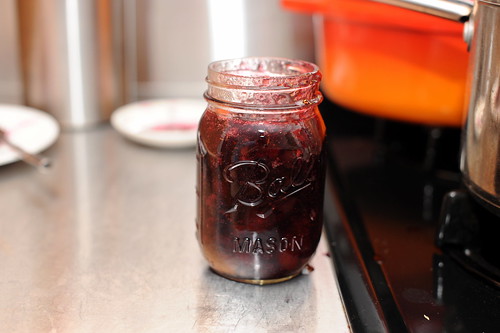 So this is what happens when you get so fed up with your fear, you mutter to yourself, to hell with it and just go for it. You wind up with two jars of delicious jam, sitting in your fridge, awaiting their fate. And quite frankly, what would I have done had my jars not sealed themselves properly? I would have gone into my kitchen, taken out the biggest spoon I own, and ate my jam in one sitting just like that – au naturel. If only every kitchen failure tasted as good. 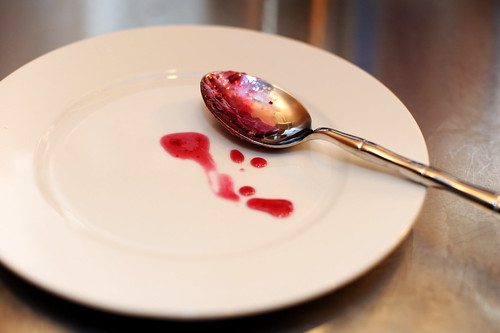 Place a small plate in the freezer.

Chop up your apricots and place them in a heavy bottomed pot. Add blueberries, thyme, sugar and lemon juice. Add a couple of tablespoons of water.

Bring the fruit to a slow boil on medium heat, stirring occasionally. At first your fruit will get quite watery, but as it cooks, it will begin to fall apart. Stir occasionally and skim the froth that you see coming to the surface at that first boil.

Cook your jam until the temperature reaches 200 degrees F. At this point, your jam will darken in color (blueberries help!) and deepen in hue. When it leaves a thick coat on the back of the spoon, take that plate out of the freezer and drop a dollop of jam onto the plate. If it runs, try cooking for a few minutes longer and testing again. If it becomes solid, your jam is done.

Meanwhile, bring another large pot of water to a boil and sterilize your jars. When cool, fill your jars with jam, leaving 1/2 inch of space on top. Wipe rim and screw threads with a clean damp cloth. Add lid, screw band and tighten firmly and evenly. Do not over tighten.

Put the sealed jars in the pot with water and keep them covered with at least 1 inch of water and boiling. Boil for about 20 minutes.

Lift the jars out of the water and let them cool without touching, or bumping in a draft-free place (usually takes overnight).

Once the jars are cool, you can check that they are sealed verifying that the lid has been sucked down. Just press in the center, gently, with your finger. If it pops up and down (often making a popping sound), it is not sealed. If you put the jar in the refrigerator right away, you can still use it. Some people replace the lid (with a new lid) and reprocess the jar, while it’s still hot for the full time in the canner. Depends on when you want to eat your jam. If it’s for immediate consumption – no need for the whole dog-and-pony show. If it’s for a few months from now – and you plan on maybe giving these as gifts, then you want to make sure the jars seal properly.