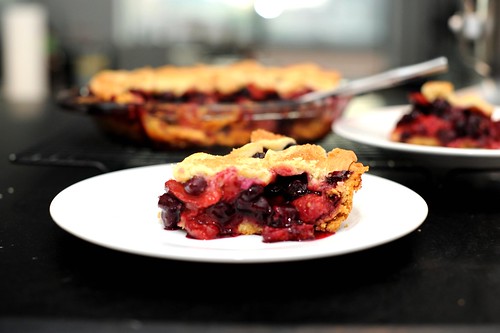 I am a girl who loves a good fruit pie. I can think so nothing more delicious in the summer, and I love making it almost as much as I love eating it. But, I have a bone to pick with fruit pies because they are finicky and temperamental in the summer months. My biggest gripe is that the best time of the year to make fruit pies is also the most challenging. If you’ve ever made your own crust, you know crust’s two mortal enemies are heat and humidity, and guess what New York summers are known for? Meanwhile, farmers’ markets are brimming with the most ripe, fragrant fruit begging to be eaten, canned, and turned out in baked goods. Other than enjoying summer’s bounty as nature intended, what more glorious way is there to showcase fruit at the peak of its season than baking it into a pie? Never mind that you dread turning on your oven when temperatures cross into the triple digits, as you yourself slowly cook in your tiny urban apartment. So when the pie is baked – so are you. 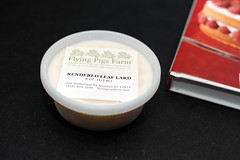 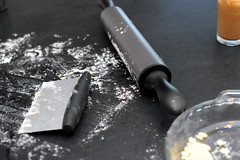 And yet to me, despite the heat and the sweat, the process of making pie is one of life’s greatest pleasures. I love to see the dough, crumbly and speckled with pea-sized pieces of butter come together, love shaping the pie crusts into disks and chilling them. Love to prepare the fruit: pit the cherries, hull the strawberries, blanch the peaches. Love to flour my counter and roll out the dough out and place it into the pie dish. But nothing gives me more glee and jubilation than piling the fruit into the pie shell, seeing it tower before my eyes. 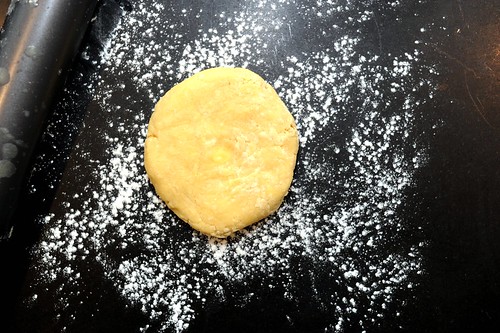 Fruit pies offer a taste of summer, a burst of sunshine topped by a sugary, flaky, buttery crust. Crust is key to a good pie, in my opinion. But with fruit pies, you often face a soggy bottom – the upside of a fruit pie is also its downside. And I used to think, such is the way of the world. I had to just make do and carry on. But there’s a genius solution in place – pre-baking your bottom crust! It’s genius, really, and you can kiss those soggy bottom crusts goodbye. 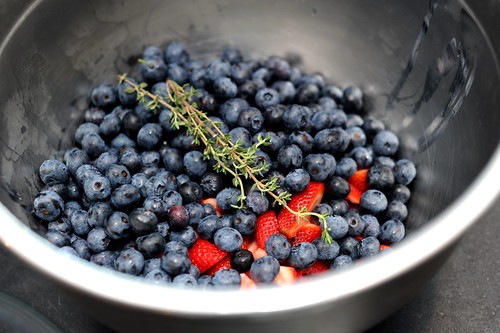 A solution came my way in the form of a book and a New York Times article almost simultaneously. I was lucky enough to receive a review copy of Bill Yosses’ and Melissa Clark’s new book, “The Perfect Finish: Special Desserts for Every Occasion”. I leafed through the entire book the night it arrived in the mail, and there wasn’t a single thing I didn’t want to make, but a recipe for a pie crust caught my eye first. I’ve been a long-time fan of Bill Yosses, the executive pastry chef at the White House; and Melissa Clark’s recipes and I go way way back. I’ve been inexplicably drawn to her recipes, not just for the New York Times, but for other publications like Food & Wine. I have, on many an occasion, clicked on tempting recipes only to discover that they have been written by her. When I saw the method for pre-baking crust, and then saw the New York Times sour cherry pie recipe, I knew that I was never again going to have a soggy crust in my pies. Hurray! I want to twirl around the room in jubilation! 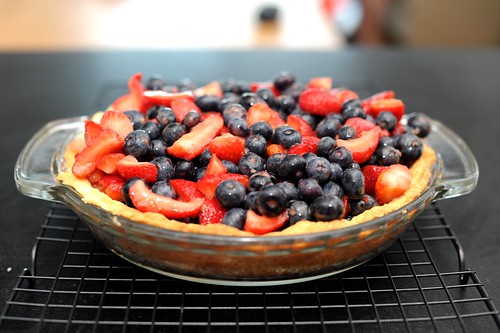 Pre-baking is the bees knees! So ingenious I’m sad I didn’t think of it myself. It makes absolute perfect sense and is worth the extra time spent in the kitchen. You can pour yourself one of these and read a book, or look out the window, or stick your head in the freezer for a minute to cool off. Whatever you do, you can pass the time swimmingly because it’ll be well worth the extra effort. 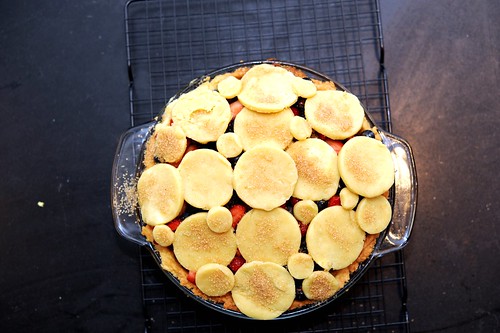 I bet there aren’t any disagreements over wanting a flaky bottom crust. So we’ve got that going for us, right? Now that the matter is settled, let’s move on to the content of the crust. There’s some debate out there, an each option with its own fervent following: all-butter, butter-with-shortening, or butter-with-leaf lard? My own personal preference (at this point) is tied between an all-butter and a butter-leaf-lard crust, between which I will alternate depending on my mood and if I have access to quality leaf lard. No matter which recipe you go with, you want to find the best quality butter around. Better butter means higher fat content. Higher the fat content means a flakier crust. It’s that simple. 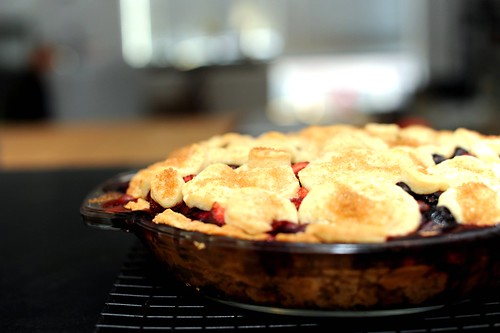 Whatever method you choose to go with for your crust, you will want to work quickly, be it cutting your butter into flour (in a pre-chilled bowl, of course!), shaping your dough into disks, or rolling it out. You have a few minutes between the too-hard-and-crumbly dough and too-warm-and-tearing dough; and overworking the pastry releases the dreaded glutens, diminishing your crust’s flakiness. I am not trying to frighten you, my lovelies, but instead give you as much information and ammunition to tackle this perfect-time-for-pie-but-it’s-too-hot-to-make-it conundrum. Knowledge is power, and I know you will do beautifully. But most importantly, I want you to not be afraid. Worst case, if your pie refuses to roll out, you can gently press pieces of it into the pie dish and then when you are ready to top your pie with the second crust, you can use a cookie-cutter to shape crust circles and lay them on top (another genius Melissa Clark idea). Which will save you the possible aggravation and yield a rather pretty pie. And you will get points for taste and looks. Bonus. 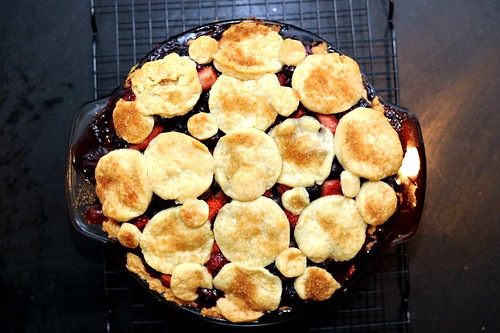 Then you can kick back and pretend the whole thing was completely effortless, because neither heat, nor humidity got anything on you. You can totally reward yourself with a slice of pie, because you earned it, friend. Just be sure to share some with me. 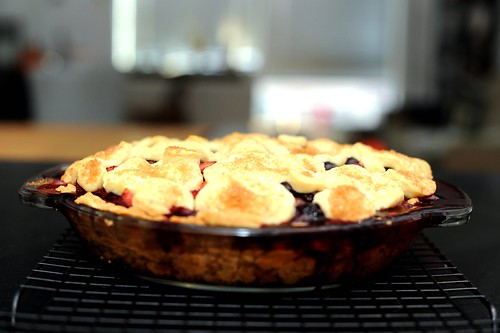 Blueberry Strawberry Pie
Crust adapted from “The Perfect Finish: Special Desserts for Every Occasion” by Bill Yosses and Melissa Clark and from NY Times piece by Melissa Clark

Pre-chill a stand mixer beforehand. Once cold, place butter, cream and lard. Beat on low with a paddle attachment until smooth. In another bowl, thoroughly mix together flour, sugar and salt. Add about a third of the flour mixture to the butter mixture and beat on low until the mixture comes together like a fairly wet dough. Add the remaining flour and mix until the dough just begins to come together. Once that happens, turn the dough out on a floured surface and knead gently into a small ball. Divide the ball in half, wrap each half in plastic wrap and flatten into disks. Refrigerate for at least 2 hours or overnight (or up to 3 days).

In a large bowl, toss together blueberries, cut-up strawberries and thyme. Add lemon juice, sugars, salt, creme de cassis and vanilla extract. Set aside to macerate for about half an hour.

After the half hour passes, add the cornstarch and mix it until it completely dissolves. Set aside.

Assembling and Baking the Pie:

On a lightly floured surface, roll out one of the disks of dough to a 1/4-inch thickness and fold it in half. Then re-roll to a round about 12 inches in diameter and the thickness of about 2 quarters. This thickness will give you the layers of flakiness you so desire in your pie dough, particularly the bottom part. Transfer the dough to a Pyrex 9-inch pie pan (or a dark steel pie pan), and trim the edges so they are even with the rim of the pie pan. [Pyrex is particularly useful here as it allows you to see the doneness of the bottom crust due to its transparency.] Cover the dough with plastic wrap you used in chilling this disk, and place in the freezer for 1 hour.

When ready to bake, preheat the oven to 425F. Remove the pie pan from the freezer and line the dough with aluminum foil on top, delicately pressing it to form to the shape of the pan. Place the baking beads, dried beans, or uncooked rice (or lentils, etc.) on top of the foil. Bake for 30 minutes and allow to cool on a cooling rack afterward. After the pie cooled off, preheat the oven again to 350F.

While your shell is baking, roll out the second disk of dough. Using cookie cutters (I used the circle ones of various sizes) cut out a bunch of circles from the rolled out dough. Place on a baking rack and refrigerate until ready to decorate the top.

Pour the berry filling into the pre-baked pie shell. Place your pie dough circles on top of the pie, starting in the center and filling out to the outer sides. Make a pattern pleasing to your eye. I liked placing my circles slightly atop their neighbor circles to create some kind of a cohesion. I used tiny circles to fill in some gaps. When done with the top of the pie, sprinkle some Demerara sugar on top of the pie.

Bake for 1 hour, on an aluminum foil covered rimmed 11 x 17 inch baking sheet on the center rack until the pie is deeply golden and you can see the thick juices bubbling through the openings.

Let cool before serving as it allows the starch to set a bit and give the pie some structure. Otherwise, your pie will ooze and fall apart when you are trying to serve it. While it’s the pie’s taste we are all most concerned with, it is a great feeling of accomplishment to be able to serve the pie to your guests where the slice has great structure and holds its shape.