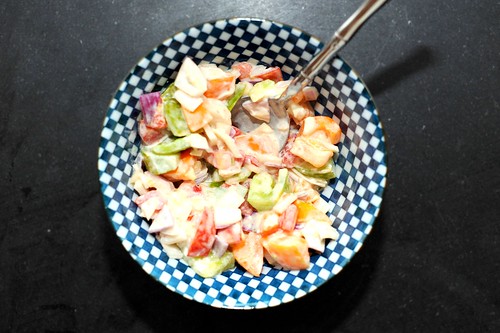 I’m gonna make this one brief; there’s little time. Work has been busy, but I want to post more and give you guys more recipes. And yet I’ve barely any time to type up the recipe, never mind edit the photos and write a few words outside of the cooking instructions. It’s strange to be so busy in August, because August, by my calculation, shouldn’t be busy at all. It should be slow and languid and hot. Well, it got one out of three down, but yowza, August, wanna slow down for me a bit? Just enough for me to catch my breath? 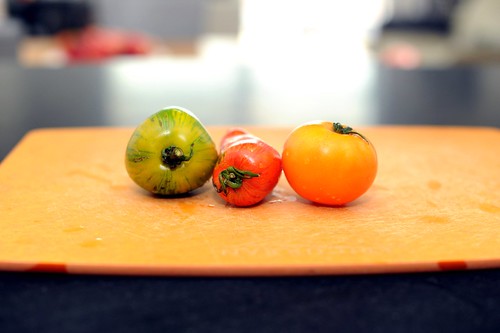 Though to be fair, we did finally get a few cooler days in New York and the weather has grown, as I like to call it, more civilized, at least for the time being. I no longer arrive to work covered in sweat, which is a bonus, not only because it’s sort of gross, but more importantly because the minute I get in to work, I’m hit with such cold temperatures, I should have furry boots under my desk. You get that much colder when you’re sweaty. Thank goodness for that oversized fleece I keep nearby. Still, cooler temperatures and all, it’s still plenty hot out there. 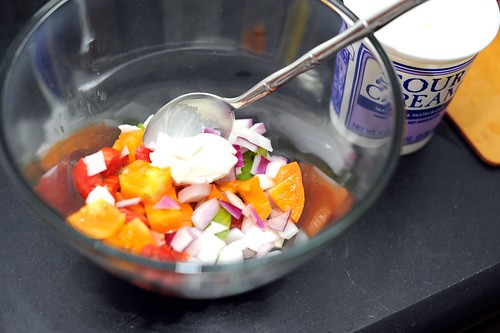 This is a recipe I did for the Real Simple’s blog, Simply Stated, a few weeks ago when they asked me to put together a three ingredient recipe that was perfect for summer months. Barring your usual caprese and prosciutto e melone ideas, I wanted to give you something that was actually a bit revelatory. I know three ingredients sound a bit like cheating, and to be honest with you, I was a little afraid putting this in front of you, except, you see, this recipe here, that’s one of those things I ate as a child by huge bowlfuls. Were you to give me a small shovel in place of a spoon, I would have been even more pleased. Every time I make this, I am, at once, at my grandmother’s for the summer, two hours away from Moscow, surrounded by lush farmland and dense Russian forests. 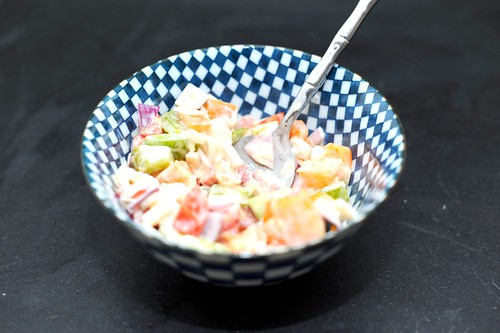 I know this salad looks so simple, that it’s almost a non-recipe, but I’m okay with that. I’m not trying to pull a fast one on you. This is seriously amazing, delicious, and sings a glorious ode to summer and to tomatoes, which are everywhere right now. These particular tomatoes here come from one of my favorite local farms, but good tomatoes can be found anywhere this time of year. I like make this salad for dinner and eat it with thick slices or rustic sourdough bread. It takes minutes to make, it’s beyond addictive, and it allows tomatoes to really shine. I particularly love the bite of the onion here as it accents the sweetness and acidity of the tomatoes. Plus, when was I able resist anything with sour cream in it? Exactly – never. 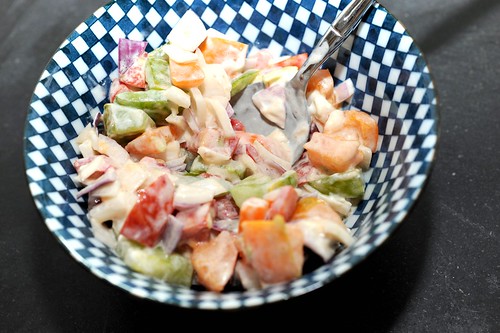 Slice your tomato into thick wedges and your onion into slivers. Add sour cream, and mix well to combine. Season with salt and pepper, and serve immediately.

[You will have, after you’re done, this creamy juice left over with some onions swimming in it. I implore you not to throw that out. You know that rustic bread I was referring to? Well, save a piece and dip your bread in the juices. Trust me, you’ll thank me later.]