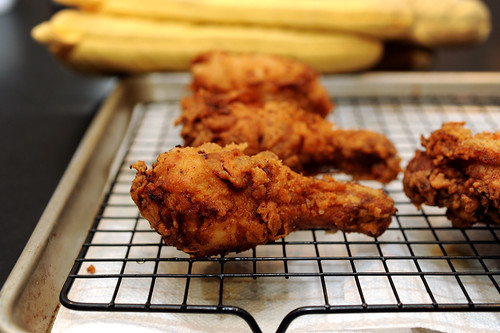 Last night was an absolute, spectacular dinner fail. Andrew got the summer plague – the kind that makes you achy all over and forces you to want to sleep most of the day, or at the very least just convalesce on the couch. We were hoping to make dinner at home, but the kitchen sent us a blunt do-not-attempt message –eventually we got it. We were elbows deep in the Season 2 of “The Wire”, and I was all, “What?! Ziggy?!! Really?!? Oh… no…” and “Will they kill him? What about him? She won’t end up well, now will she?”, and also, “What no, Bubs?!? Again???!? For serious?!!??” Andrew, who is watching the series for the second time, is very patient with my inquiries, and tells me nothing. 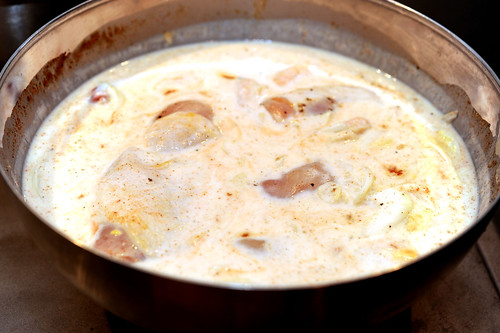 But anyway – the dinner attempt. We had decided on sausages with spicy sautéed cabbage, along with a sampling (pastrami lox!!) of our new neighborhood gem (Peter Shelsky, its proprietor, told us all about his grandmother’s German Cherry Soup – yes please!). But our kitchen had other plans. The sausages, it seemed, sprung a leak from their case, leaving a rather funky, musty smell in their wake. Tofu was out of the question – we had just made it a few nights ago. Our poultry and meat were frozen solid. We had eggs that morning, so putting a fried egg on top of whatever we were eating was out. A salad didn’t feel substantial enough to be dinner. We had eaten pasta several times that week. And a lot of toast jam-or-avocado-or-other-stuff. The final, we-get-the-message moment was when I cut into the first-of-the-season heirloom tomato I’d picked up that morning at the greenmarket, hoping to make tomato sandwiches, and found a quarter sized black growth inside the tomato (not rot, mind you) – the likes of which I’ve never seen! Dear kitchen, message received, thank you.

So we picked up the phone and got some takeout, and it was delicious. I think it tasted better than average in light of the fact that our kitchen was busy staging an insurrection. 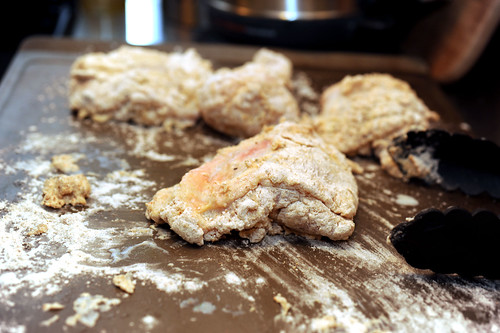 I take my kitchen failures in stride. Sometimes I’m off my game, distracted or under the weather; and sometimes the universe wants me to order take out and eat it straight out of the containers it comes in without bothering with dishes. When my wallet was stolen and I didn’t have any cash, I ate some baked beans straight out of a can and then, upon rummaging in my cupboards, made the most intensely spiced tomato soup, because nothing forces a kitchen revelation like necessity.

Kitchen successes are as glorious as kitchen failures are debilitating, and one can’t happen without the other. But it was only last week, in fact, that great things happened in our kitchen. There was peach, apricot and blueberry cobbler with a cornmeal crust; sweet, summer-kissed corn on the cob (hardly a cooking endeavor, but so glorious!); and fried chicken that both Russell and Andrew declared was the best they ever had.

In my chicken-frying experience (which is surprisingly ample, for this New England Russian) I’ve learned a thing or two about how to consistently make good fried chicken. Technique matters here because the process ain’t exactly rocket science. 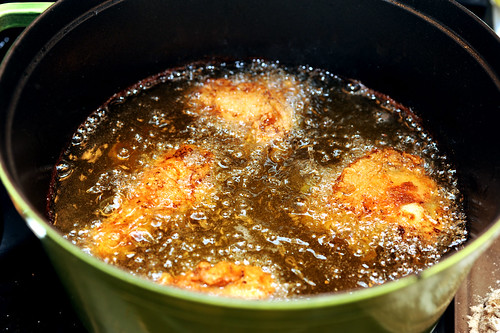 In fact, while swapping ideas with Melissa Clark about various fried chicken practices, last week (we’re on the same chicken-frying schedule, apparently) we exchanged tips on our findings. Dark meat cooks better than white (but I suppose that’s a matter of opinion). Brown paper bags or plastic Ziploc containers provide better shaking environment than dredging your chicken in a bowl or in a plastic bag. When resting your cooked chicken on a baking rack, be sure to flip it after a few minutes, lest you wind up with a soggy chicken bottom. Soak your chicken in buttermilk the night before – it really does make a difference. Add more salt than you think you’ll need, as the chicken, magically, tends to shed a lot of it in the process. Wear protective oven mitts in case the oil decides to sputter and burn you (have you ever had an oil burn? I don’t recommend them.)

And last, but not least, don’t count calories while biting into your freshly fried chicken. It’s a treat and it’s delicious – so live a little. And should all else fail, keep a can of baked beans on hand – just in case.

A reader below asked a really great question – how to dispose of the leftover oil? Whatever you do, don’t pour the leftover oil (you’ll have quite a bit left) in your sink. You should pour it into a container and throw that out, or you could try taking it to a local restaurant that does some deep-frying and asking them if they wouldn’t mind recycling it along with their oil. I don’t see why they would turn you down (unless they have to pay for it or something) – but it is a better thing for the environment.

1. Rinse the chicken parts and pat them dry. In a large bowl, stir together the buttermilk, onion, garlic, bay leaves, 2 teaspoons salt, 1/2 teaspoon black pepper, and Tabasco. Submerge the chicken in the marinade, cover, and let rest in the refrigerator for overnight.

2. Allow the chicken to come to room temperature before cooking. In a bowl, mix the flour, the mustard powder, 2 teaspoons salt, cayenne pepper, and the remaining black pepper. Place a paper bag inside another paper bag (to prevent seepage; you may need several bags for this) and transfer the flour mixture into it. Shake each chicken piece, one by one, in the paper bag until completely coated and set on a dish. This is much better than dredging the chicken in the flour in a bowl, or in a Ziploc – somehow the structure of the paper bag allows for better shaking and, thus, coating. Alternatively, you can take one of the large, wider Ziploc plastic containers (or an empty cardboard cookie box from a bakery) and shake your chicken in those. Either works better than dredge in bowl or shaking in a Ziploc plastic bag.

3. In a large Dutch oven or heavy skillet with tall sides, heat the oil (it should come up to about 3-inches tall) until it reaches 350 degrees F. Gently slide a few pieces of chicken in the oil (to prevent an occasional splatter, I like to wear oven mitts while I hold tongs and slide my chicken in). Fry the chicken in the oil for 6 minutes, gently flip the chicken with tongs. Continue frying for another 6 minutes, then flip the chicken once more and fry until dark golden brown and the juices run clear when pricked with a fork, about another 5 for dark meat. White meat will cook faster so test it sooner, and flip earlier. You should slightly shorten the cooking time with each subsequent batch as the oil will get hotter and cook your chicken parts faster. Use your judgment here – if you see the chicken browning too fast, adjust the cooking time accordingly.

4. Place the chicken on a wire rack set over a paper towel-lined baking sheet to drain. Allow the chicken to drain for 1 to 2 minutes, before flipping it over (otherwise, it collects the steam rising from the paper towels and makes a damp, soggy spot on your chicken pieces) then serve warm. Leftover fried chicken (if you have any) makes for a great following-day-picnic.