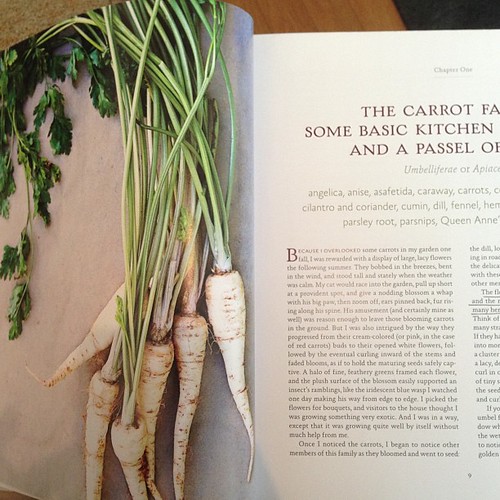 Happy Friday, friends. This past week I’ve been immersing myself in some new work, which I am finding very interesting, and thoroughly (as in page by page) reading the two cookbooks which I’m finding absolutely incredible and alive: Vegetable Literacy and A Girl and Her Pig. Both are excellent, both have strong, distinct voices. In the case of the former, this isn’t a book you just open, pick out a recipe, and cook from. This is a book where you really benefit from reading Madison’s research on various plants: it’s as much of a gardening/botany lesson as it is a cooking one. This week I finished the first chapter, which is on Umbilliferae: carrots, parsley, thyme, just among a few. When Madison starts explaining vegetables to you by kingdom, phylum, class, order, family, genus, species, I had to fan myself from getting so excited, I was practically lightheaded. Like I need an opportunity to geek out… I cannot wait for chapter two.

The second book, A Girl and Her Pig, is fresh, irreverent, and full of contagious enthusiasm, and recipes that make me want to forget about work, writing, blogging, laundry, and the rest, and just lock myself away in the kitchen for a few days. Bloomfield gives you a recipe for deviled eggs, but hers must be cold, cold, cold. She has an oatmeal porridge recipe in the book, and before you think to yourself how boring that sounds, consider making it. It’ll be the best porridge you’ve ever had. And how can you not love chapters titled “Meat Without Feet”?

In any case, here are this week’s links! Have a lovely weekend, all!

The kitchens of 2013 seem to be leaning towards white and pared down. The “show-off” kitchen seems to be losing its popularity. Do you guys have a dream kitchen all planned out? I do! I want a lot of white, I want white subway tiles with black grout, I want some stainless steel counters, but mostly I want marble (and I love when marble ages). I want a lot of low’ish shelving and a lot of it to be open. The list goes on. How about you?? What does your dream kitchen look like?

The child, the tablet, and the developing mind.

I’ve always loved Frank Bruni’s writing, but this piece is particularly good. I’m sure there’s been some backlash given that a childless adult doles out some parenting advice and observations, but just because he’s never reared a child himself, doesn’t mean he doesn’t have some worthwhile things to say.

On white men and mass shootings.

And some more on guns… High rates of gun violence linked to weak laws.

Game of Thrones is back on HBO – in its third season – yay! I’m pacing myself through book five, not wanting it to end. Andrew and I are watching Season 2 on Netflix and recording season 3 on HBO. Here are some show-inspired cocktails. I must admit, I’m not tempted to make either, but perhaps I might be inspired to concoct my own version of Winterfell or the Dothraki (hm, what would go into that one?)

And Epicurious assembled a themed menu and party plan!

100 dinner rules from Dinner a Love Story. Numbers 75 through 77 are my favorite.

The Facebook phone. Anyone planning on getting one? Anyone intrigued? I’m usually a slow-to-adapt on new hardware, and I like my iPhone just fine.

Instead of leaning in, let’s just stand up straight. I think I am more of a stand-up-straight person, than a leaner-in. You?

Two days ago, Roger Ebert published this moving piece. I read it wiping tears away from my face because I was so moved by a man who just refused to stop. Yesterday afternoon, while running a quick errand, I got a news alert on my phone that Ebert passed away. He was 70. To say that this man was a cultural icon, an influence on so many, would be a huge understatement. Here is his obit from the Sun Chicago Times where he worked for 40 years.

I’d like to leave you this Friday on a happy note, as per usual. And here you go. Des hommes et des chatons. I can’t get enough.