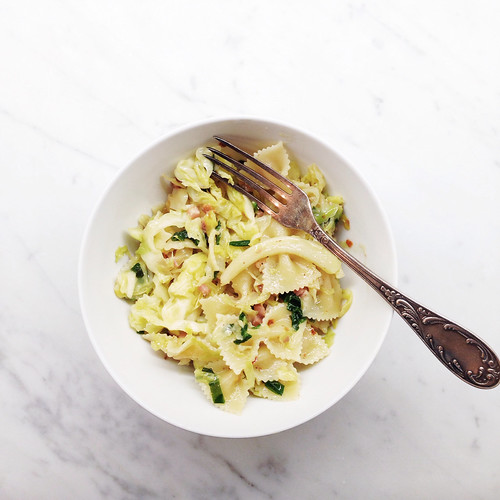 It was over dinner Saturday night that Franny’s restaurant cookbook came up in conversation. A woman seated next to me asked if the book was any good.

Then I added, “Full disclosure: I worked on it, but it’s very good independent of that.”

The conversation veered in many directions through the evening – fig trees, writing, what we were eating – but my thoughts stayed with Franny’s cookbook through the night and into Sunday morning. It had been too long since I cooked from it.

I had a head of Savoy cabbage in the crisper that was patiently awaiting its fate. Time had turned its leaves more wilted than its normal veining makes it appear – and more limp, too. But cabbage is a resilient vegetable – a few days past its prime and it’s still in fighting spirit. Soups, stews, roasted wedges, cabbage is a marathon vegetable. I can’t think of a single occasion when a head of cabbage went beyond the ability to be salvaged in my house. On the other hand, I can think of countless bags of spinach I’ve forgotten about and found weeks later, way in the back of the refrigerator, the bag’s contents having liquefied itself to a foul-smelling brown liquid. On some unlucky occasions, the bags leaked and instead just removing the offensive produce, I’d spend the next hour scrubbing the refrigerator shelves. 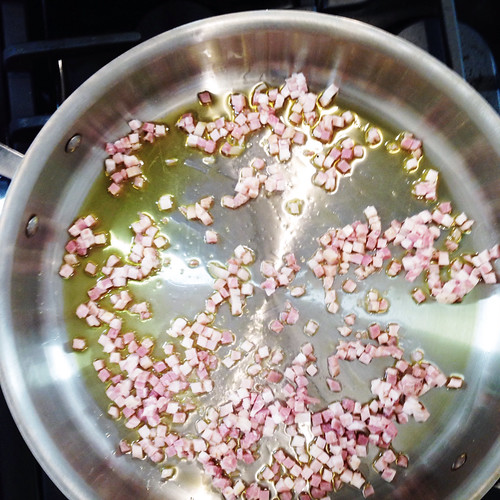 I had some distant memory of helping to test Franny’s pasta with cabbage. At the time, eating it made it feel “northern” to me in origin, but it wasn’t until the headnote was written that I confirmed it. There’s butter too – a loose hint of its geographic roots. It was very good; spartan almost, with just a loose binding of creamy cheese to tie everything together.

I futzed with it a little, adding pancetta and sage, and swapping out garlic for ramp greens left over from a recipe test a week prior. I had some sharp Pecorino Romano on hand, instead of the preferred Toscano (a softer, less aged sheep’s milk cheese) – but I was also craving a sharper, more aggressive bite to stand up to pancetta’s assertiveness. 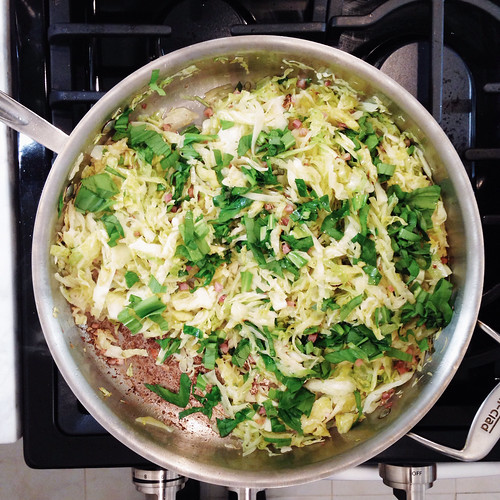 It never ceases to amaze me that something as humble and as unassuming as a head of cabbage, can produce such marvelous, glorious results. Hardly exotic, imminently accessible and affordable, sold at every vegetable store and supermarket – have you ever shown up to a grocery store to find it out of cabbage? – it seems improbable that a vegetable of such seemingly meager aspirations can reach such great heights. 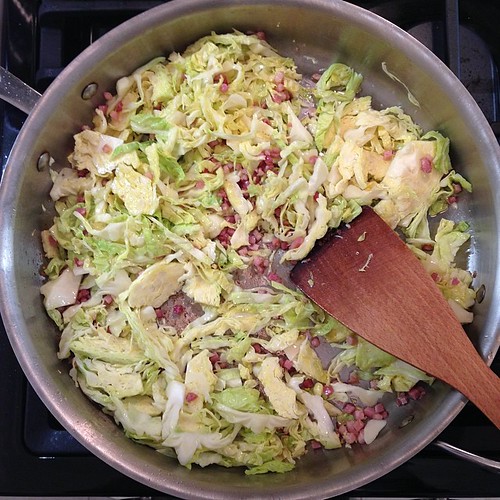 But it can. The proof is staring at you above.

Quick Housekeeping Note:
I’m starting a new tag (one I’ll have to apply retroactively) called “weeknight” which will denote things I cook for me and Andrew (and our friends and family who visit) on a regular weeknight. Yes, I work at home, but my time, too, is at a premium, and weeknight cooking has to be quick, efficient, and imminently delicious – something we turn to over and over. I want to work within a commuting person’s parameters, plus weeknights tend to be busy no matter what. If it takes me longer than 1 hour, start to finish, to make, the dish won’t get the “weeknight” label. I realize some of you may be looking for an even quicker meal, but in my experience, between prep and clean-up, and such, an hour is a reasonable time frame to manage your expectations.

As I mentioned above, I wanted my pasta to have a little more heft, so I added pancetta, and a bit of fresh sage, for good measure; pancetta and sage are such good friends, why separate them? I wanted to transition the dish to have spring-like notes, and it was fortuitous that I had some ramp greens on hand. Plus, what a great way to use your ramp greens! Lastly, I didn’t have any pecorino Toscano on hand (it’s becoming easier and easier to find, by the way) and wanted a more assertive cheese to stand up to pancetta – so I used pecorino Romano.

2. Meanwhile, bring a large pot of water to a boil and add enough salt so the water tastes like seawater. Cook the pasta until 2 minutes shy of al dente; drain, reserving ½ cup of the pasta water.

3. Toast pasta in the skillet with the cabbage and return to medium heat. Add the remaining butter and cook, over medium heat, until the pasta is al dente, 1 to 2 minutes, adding a little more water to the pan if the sauce seems dry. Toss pasta and cabbage with cheese, and season to taste with salt and pepper. Divide pasta among serving plates or bowls and top each with the remaining grated cheese and a drizzle of olive oil.