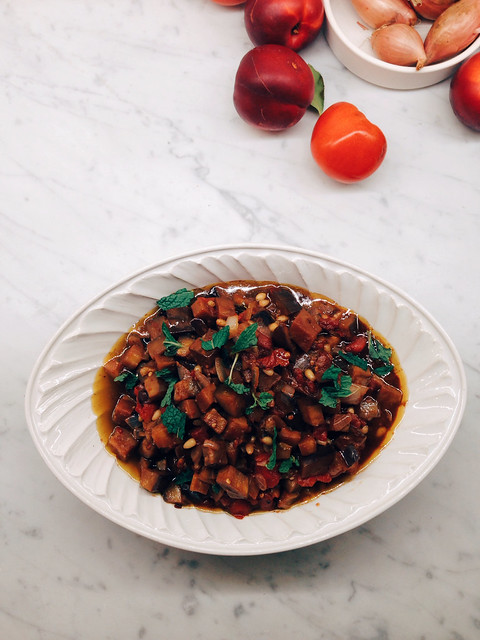 Folks, I have much to tell you, and I had hoped that August would be off to a slow start, but I was wrong. It’s been pretty busy and a few things here and there needed to be done for one of the books, so that’s kept me occupied. We had family visiting over the weekend, and by far, my personal highlight was going through The Food of Spain with my two-year old niece who was riveted. She fell completely and unabashedly in love with Angelita Carcia de Paredes Barreda (an 84-year old Franciscan nun) on page 214 and for twenty minutes straight we played the game of “Where’s the old lady?” She was also really taken by the fried goat cheese, but then again, who wouldn’t be? Fried goat cheese is stuff of the gods, right?

I don’t know why, and there’s no segue or connection to my news or to eggplant caponata I wanted to tell you about, but I’ve been thinking – a lot – about a really good high school friend of mine. When I say really good, she might have been one of the biggest influences in my life. She was fiercely smart – smarter than anyone I’ve ever met – and well educated. She spoke, and picked up, languages with great ease: Russian, Arabic, Farsi. She taught herself ancient Greek; she was fluent in Latin. She introduced me to authors and food; music and theatre – and she had a razor sharp wit. I always, always, looked up to her. She pulled me through some hairy situations and it was wonderful and lovely to spend our post high-school and college years in New York. She took me to a hole in the wall restaurant that served outstanding pasta alla carbonara, she extolled the virtues of cacio e pepe; and I still fondly recall our incredible meals at the now-shuttered, excellent, Cookies and Couscous that served, well, you get the idea. She was incredibly hard to get to know, but through our many years of friendship, there were moments when she’d open up. She was like a sister to me.

And then one day she stopped answering her phone. And then the number became disconnected. 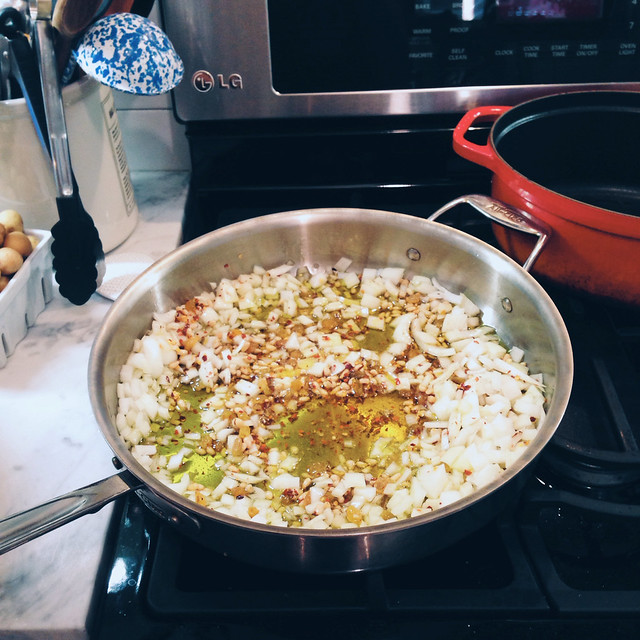 At first I thought maybe we had some kind of a girl friendship falling out. You know: sometimes you grow apart and one person just stops picking up the phone. I assumed I wasn’t smart or cool enough to hang out with her – and while it made me very sad, there was nothing that I could do. There was no way of getting in touch with her. I missed my friend but I had to move on with life.

But then, when from time to time, I’d try to see what she was up to, I’d find, over and over again that it was as if she’d never existed. She was a ghost. Whatever digital record might have been out there of her, someone went to great lengths to expunge it.

Wherever she is, whatever she is doing, I hope she is all right.

When Andrew and I were getting married, there was this ache, this pull on my heart. I really wanted her to be there, to witness the day with us, to meet Andrew (whom she would immediately love) – but there was no way of reaching her.

But there’s not a day that goes by that I don’t think of her and hope she is safe, well, and happy.

Anyway, here’s the thing. Whenever something great, something amazing (or even something awful) happens, you want to share the news with your core people: your closest friends, your family. I’m a generally very private, but my tight circle of friends is my extended family. And I like to share my news with them.
And something great and amazing did happen last month. But I was too busy meeting two deadlines (for the same day, no less) and sitting down to tell of any news was nowhere near on my mind. But… here goes. 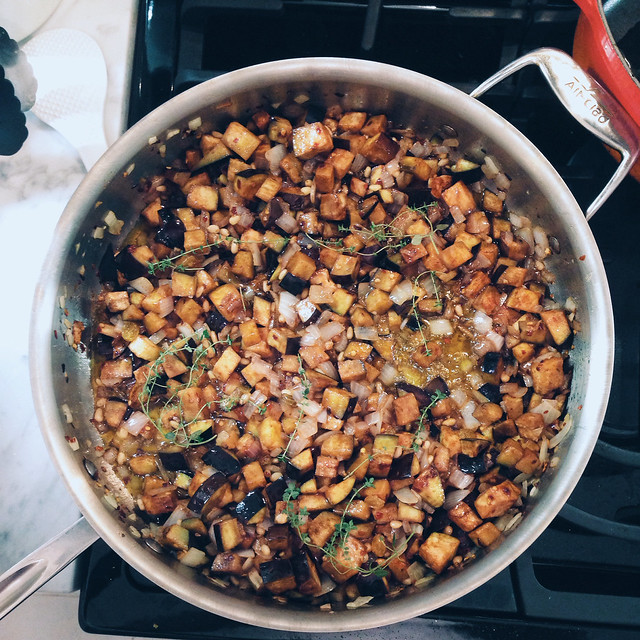 Starting September 2, I’ll be joining Phaidon Press, full time, as a project editor in their cookbook division reporting to the wonderful Emily Takoudes (formerly of Clarkson Potter). I don’t have the words to properly describe how happy I am about this. It is a dream job with a dream publisher. I’ve long been an admirer of Phaidon cookbooks: their beauty, their timelessness, their usefulness. I had never, in a million years, would’ve imagined I’d ever work for them. But it happened, and I have many people to thank along the way, but most especially friends Julia Turshen and Melissa Clark who were more than generous with their praise. To think that four years ago I was still working in finance… if someone had told me then that I’d be writing cookbooks, and joining an incredible publisher, I would’ve laughed. I would have never believed them.

Perhaps, none of this were possible had Andrew not been so convincing in encouraging me to switch careers. In some ways, all credit, the seed of all this, at least, goes to him.

So what happens now? A few of you, when I shared the news on Facebook and Twitter asked me what “project editor” means. This means that while Emily will be focusing on acquiring new projects, I’ll be focused on the existing ones. So that there’s a very clear division of duties. Working with writers, chefs, photographers, designers — sounds like a dream. I love the process of seeing a book start out as a lump of clay and grow into becoming its own living and breathing organism. I find that inflection point, when it starts resembling something, to be magical.

As far as the books I’m currently working on: with chef Marc Murphy and the Van Leeuwen Artisan Ice Cream team, I will see those projects to the end. I just will not be taking on new work as a writer. I’ll be plenty busy working with other writers on their respective books.

So that’s my news – a new, exciting job. A job I cannot wait to start – though I’m not exactly rushing through August. I could use a few slow weeks of doing nothing; and seeing as I’ve barely taken a proper vacation since 2011, I think I’ve more than earned these weeks. 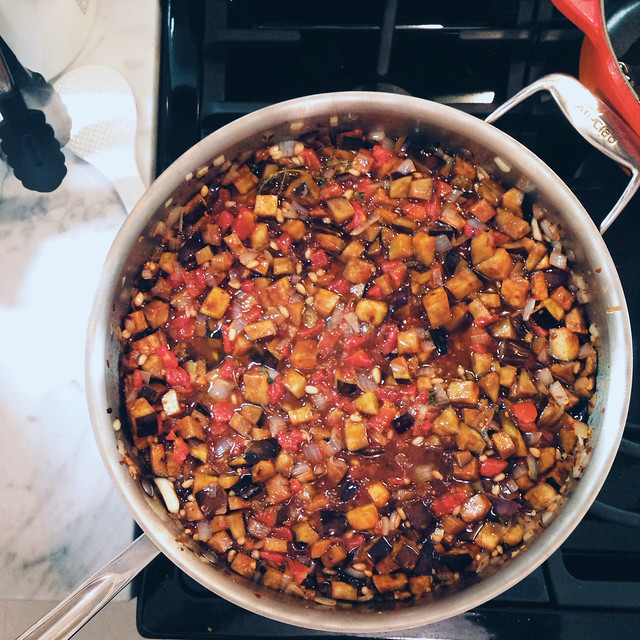 As for the recipe, I’ve long wanted to share a recipe for caponata, but kept missing the eggplant season. This here is an old Mario Batali recipe I’ve been making for years. I’ve made a few tweaks through the years, but as any of you who’ve cooked Batali’s food know, his recipes are so amazing that hardly any tweaking is needed. I’ve had lots of caponata versions through the years – and made nearly a dozen slightly different ones – but this one here, is in my opinion, superior to any others I’ve encountered. If you’re a fan of Sicilian ingredients: pine nuts, mint, chile flake, to name a few, sweet-and-sour (agrodolce) notes, then this will hit the spot. Eggplant is just excellent this time of year, so make good use of it. Along with this eggplant caviar, it’s something I love to have on hand. It makes for a stellar snack and unbeatable antipasto.

Make a huge batch, then invite some of your favorite people over, and share some wine and stories. And if you’ve good news to share – even better.

I normally don’t tweak much in Batali recipes – they’re perfect as they are, but most of the time, I don’t have at-the-ready pre-made tomato sauce. Instead, I’ve generally found that good canned tomatoes, spiked with some garlic and chile flake, will work in a pinch, so I use that here. I was out of currants (confession: I am pretty much always out of currants) but not of golden raisins (which are Andrew’s favorite) so I used those instead, and I prefer them to currants in this recipe, but if you want to go full-Sicilian, then by all means, hunt down those dried currants. Please, please, please, don’t skip on pine nuts. Yes, they are expensive (though Trader Joe’s sells them for a song) but they are an integral component of caponata. I scaled balsamic down just a touch and threw in whole thyme sprigs, because I was lazy to pick all those leaves off; I later fished out whatever was left of the sprigs – the leaves had fallen into the caponata. Batali starts you off with half the amounts below, but last time I checked, no one has ever complained of extra caponata lingering in the fridge. It makes for a terrific snack and instant antipasto if you have unexpected company.

1. In a large 14-inch sauté pan set over medium heat, heat enough olive oil to generously cover the bottom of the pan until hot but not smoking. Add the onions, pine nuts, raisins, chile flakes, and garlic, and cook, stirring, until softened, about 4 to 5 minutes.

2. Add the eggplant, sugar, cinnamon, and cocoa and continue to cook until the eggplant starts to soften, about 5 more minutes. Add the thyme, tomatoes, and balsamic vinegar. Bring the mixture to a boil.

3. Lower the heat and simmer the caponata for 10 minutes. Remove the pan from heat and allow to cool to room temperature or refrigerate until needed. Before serving, garnish with mint and chile flakes. Serve as crostini topping or a side dish.