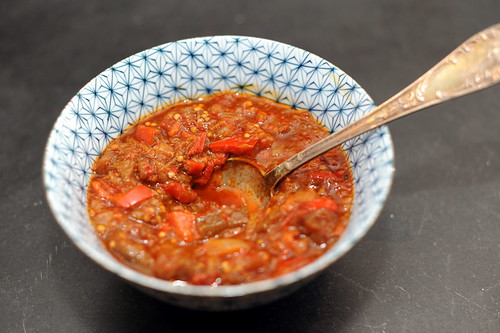 A few things first. One, my friend Tina thinks the name “eggplant caviar” is an abomination and is misleading, but that’s about the only name I know for it. Blasphemy, she said to me, do you see any caviar here? Alas, I do not. She’s, technically, in the right. So this is partially an apology to her – I don’t mean to mislead. Two, there are two schools of eggplant caviar making that I’m aware of insofar as Russian eggplant caviar making goes. Both parties cling to their version as the version, but the weirdo that is me, likes them both equally – they are quite different from one another. And like a mother to two very different children of the same origin, I cannot pick a favorite. 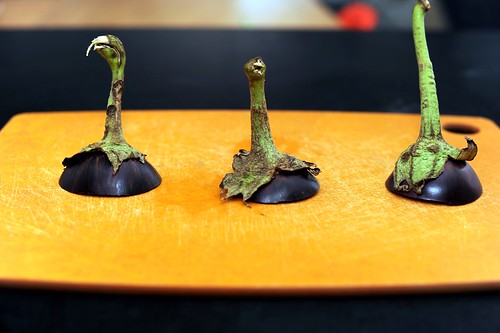 The first is the method my friends from the Ukraine have taught me – which involves baking an eggplant, removing its skin and combining it with a seductive and potent blend of pureed tomato, onion, garlic, vinegar, salt and pepper, and stirring a bit of finely minced cilantro. It is simple and addictive, and if you’re a fan of garlic, you can’t go wrong here. 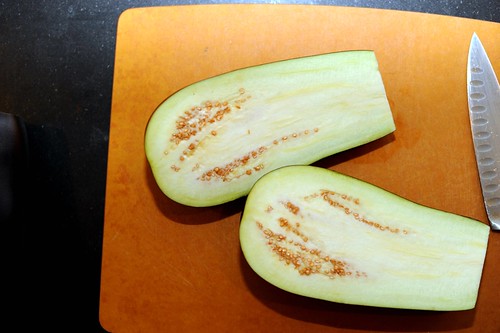 The second is a bit more labor intensive, and hails, at least according to my Uzbekistan-born grandmother, from Central Asia (think former Soviet republics that end in “stan”). It involves slow cooking the eggplant with tomatoes, onion, garlic and red peppers for many hours, until the vegetables combine, disintegrate, fall apart, and grow brown. Their transformation is magical, as things go from acidic, to sweeter, more caramelized, more seductive. While it’s uncommon for brown food to be considered sexy, this dish smolders. If you think you don’t like eggplant, try this and talk to me after. I would be surprised if you didn’t reverse your stance on eggplant. 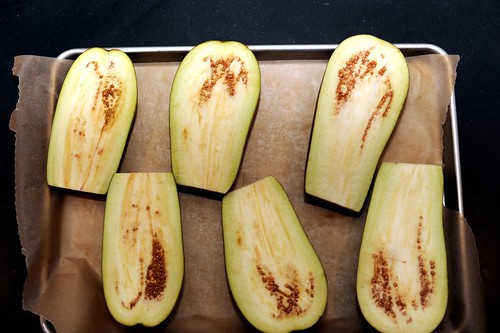 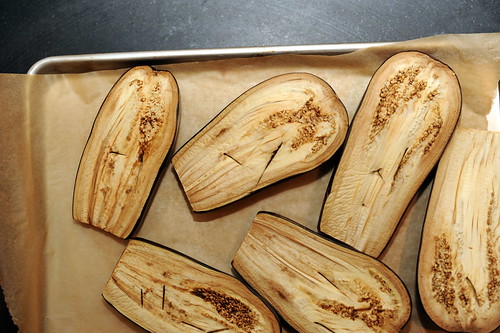 Normally eggplant caviar is served during the “zakuski” portion of the meal. For those of you who are not Russian speakers, “zakuski” describes a spread of snacks served at Russian banquets or parties, or in my mother’s case, whenever anyone shows up at the house. Originally, the word stems from the Russian word “kusok” or “kusochik” which means, piece, or little piece. The prefix “za” denotes that you are using these little pieces, or snacks, as a follow up to a drink, a chaser, so to speak. When Russians drink vodka (which they do at most celebratory gatherings), they invariably do it in shots and follow up shots with either a pickle, slice of salami, Russian sauerkraut, a pickled mushroom or a piece of dark, rye bread with something tasty spread over it. Like this eggplant caviar. Zakuski are intense, powerful bursts of flavor designed to quell the burning of alcohol in your mouth. 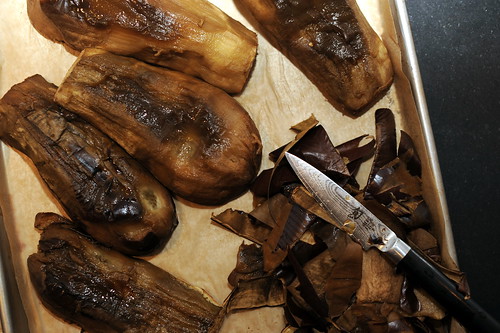 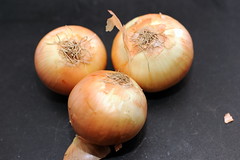 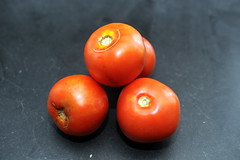 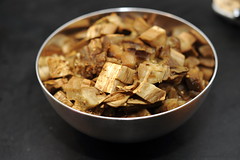 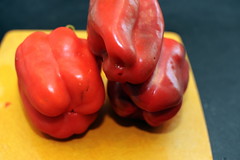 But sometimes you’re not in the mood for a drink (watch the entire Russian clan disown me after this sentence), but what you want is a taste of home, because you miss the food you grew up with. And after you spy eggplant piled high at your favorite farm-stand, you greedily load your bags with the necessary ingredients and then cook the brown mess for hours while you translate your mother’s recipe from Russian, filling in instructions she takes for granted as “given”. And laughing at her description of cooked eggplant as “sad”. If you’ve ever seen a wilted, browned eggplant, you know what she means by that. But invariably, reading that makes me smile. 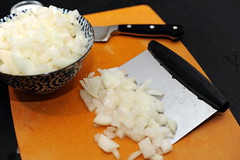 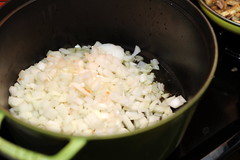 Looks, my dears, caviar it is not. But were I to really choose between actual caviar and this, I would go for this, hands down. Especially if my mother is making it. 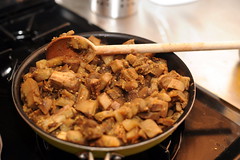 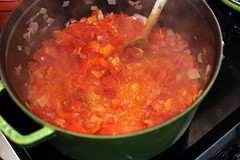 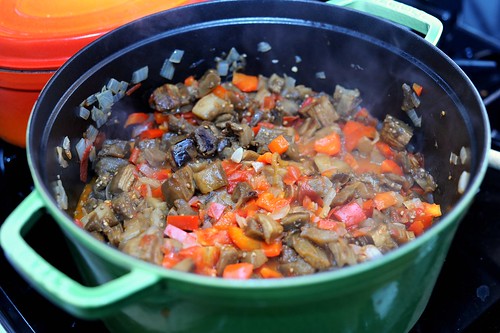 Preheat the oven to 375 degrees Fahrenheit.

Halve your eggplant lengthwise and bake, on a parchment covered shallow baking sheet (like a jelly roll) for roughly 40-45 minutes, or until the eggplant is soft when pierced with a fork (my mother’s instructions, and I quote, “until the eggplant looks sad”). Remove from oven and let come to room temperature before removing the skin. Chop the eggplant into cubes and brown in a heavy bottomed pan. Set aside. [Read this: a few tips here. First of all in cutting your cooked eggplant, use a serrated knife. You won’t believe how much easier and faster that cutting process will go for you! Also, and this goes for anything you chop, I like to use a pastry scraper to scoop my chopped vegetables and place them into a bowl. This is especially helpful if you are chopping a lot of vegetables and your cutting board is only so big. Lastly, the parchment paper on which your eggplant baked? Don’t throw it out after baking. After chopping your eggplant, cover the bowl with the parchment paper until you are ready to use your eggplant. See, as LITTLE waste as possible!]

In a heavy bottomed pan like a dutch oven, over medium heat, cook onions, carrots, peppers, and garlic in olive oil, until soft.

Add finely chopped tomatoes to the vegetable mix and saute until the tomatoes start to disintegrate. Then add the browned eggplant.

In the process of cooking periodically stir and taste. Add salt and sugar to your liking as the mass is cooking down.

Serve hot, warm, or cold, depending on the mood and occasion.