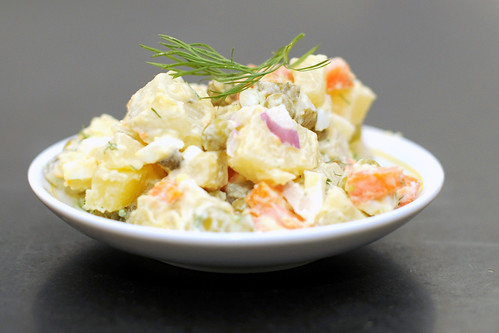 This is the salad of my childhood, the salad present at every family gathering I can recall, the salad appearing at every Russian banquet table I’ve ever been to in America, the salad regularly lurking in many Russians’ refrigerators.

In my family, we’ve always referred to this salad as Olivier or Zimniy (“of winter”), but in America, sometimes I see this salad referred to as the Russian salad. And though Russians eat a lot of different salads, perhaps this one wins in the popularity contest department.

Back when I was growing up in Russia, fresh vegetables were simply not available in the winter. The vegetable store was semi-reliable with potatoes and over-wintered carrots, and whereas now I choose to eat mostly around the seasons, in Russia, we had no other choice. Herbs and cucumbers would appear in spring; berries and tomatoes were a summer event; and fall brought mushrooms, pumpkin and apples, to name a few. We had to make do with what we had, and my mother and grandmothers did a lot of pickling and preserving in the summer and fall months.

I remember our DIY pantry, which my dad built for my mom. It was in our hallway right by the entrance door. And it was always overflowing with pickles, jams, canned eggplant caviar, and other pantry sundries. But there was always something tasty at the table, something to feed a last minute guest or a large family gathering. And this humble salad was at every birthday, New Year’s celebration, anniversary. It’s seen a lot – it can tell you some stories. Like one about my fifth birthday – when my mother roasted a goose (my very first one) – and its aroma permeated the entire apartment. I was waiting for that goose all day, which if you recall being five years old, seemed more like an eternity than a matter of hours. We finally had the the bird, crispy and succulent, and then we, the kids, got bored of sitting at the table and decided to crawl under it and create mischief. Apparently, that was the day that one of my cousins buttered my dad’s knees. My dad, dressed in his finest suit, was not amused. 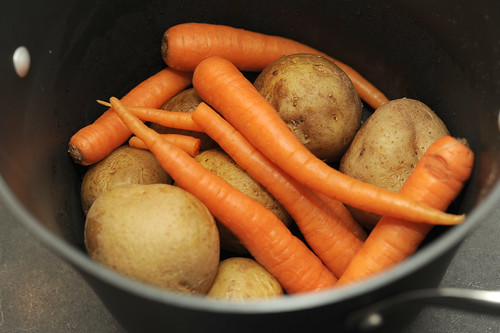 In any case, suffice to say that Olivier is as present at a Russian banquet table as a bottle of vodka. Curious about the history and origin of the dish, I went to the interwebs to find my answer. According to Wikipedia the first Olivier salad was served in the 1860s at the famed Hermitage restaurant in Moscow. Apparently, it was such a hit, people came to the restaurant for the salad alone. For that reason, I’m guessing, the salad was a closely guarded secret, but one employee tried to figure out the recipe and reverse engineer it when he left the restaurant to start his own. And while the ingredients are varied and numerous, we do know one of the many ingredients that the salad contained – grouse. Given our last grouse experience, I doubt I’ll be adding it to my version.

The current version of Olivier that you find in Russian restaurants and homes is what might be more appropriately called the “Soviet Olivier” – as exotic ingredients such as crayfish tails, grouse, and caviar became difficult to come by – the salad underwent the necessary modification to keep it from disappearing altogether. Exotic meats were replaced by ham or leftover chicken or bologna; gherkins – by regular pickles.

As kids we’d reach for it first, before salmon roe open-faced sandwiches, before the herring and onions, before the pickled cabbage. It wasn’t unusual for us to fight over the last few bits stuck to the side of the bowl. 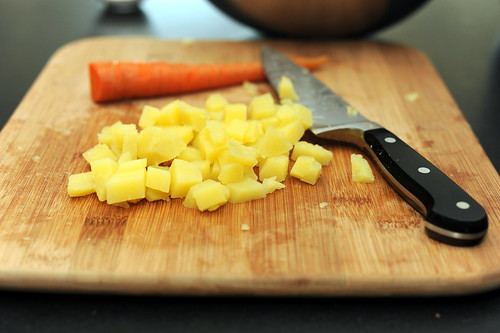 And because this just might be Russia’s most popular salad, everyone makes this salad slightly differently, and everyone believes their version to be the best. All mayonnaise or half-mayo-half-sour cream dressing? Poached or roasted chicken, or Russian bologna (otherwise known as Doktorskaya kolbasa with its own fervent following). Anya von Bremzen in her excellent and encyclopedic (and sadly out-of-print – why?!?) Russian tome, “Please to the Table” uses cabbage for an amalgamation of slaw and potato salad together (intriguing!). Just about everyone insists on using canned peas. And almost everyone agrees that the salad tastes better the day after it’s made, when the flavors get an opportunity to mingle and get to know one another overnight. 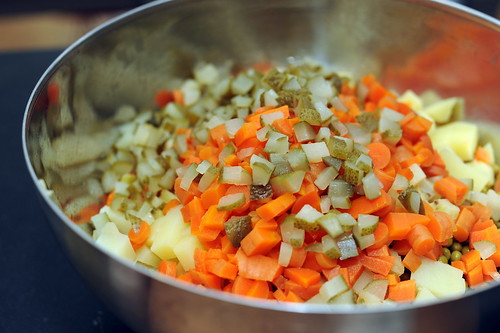 Although, I once got admonished for using canned peas, (I remember when I wrote about vinegret, I got a disappointed email from a reader that I was using a canned good) I am sticking with it in this recipe because that’s how I have always eaten this salad. Sometimes I’d have it for breakfast, lunch, and dinner on the same day, only to do it all over again the following day. This was especially true when I was sick and my mother was desperate to get me to eat. When you are recreating the recipe of your early years, you’re not so much looking to make it the most high-brow recipe in the world. You’re feeding your nostalgia, your memories, your desire for simpler times. You’re going back in time and this salad is your time machine. I could use fresh or frozen peas, but that means I wouldn’t be traveling back. And for all of us, these trip are at times of the utmost importance. Whether it’s tapping into a memory for yourself or sharing it with those you love.

For me, Olivier was the security blanket of comfort meals – always reliable, tremendously filling, brightly accented by the briny bits of pickle. And it is this salad that I am now sharing with you – in all its canned-pea-Russian-bologna-mayonnaised glory. Won’t you have some?

Ingredients:
3 pounds Yukon gold potatoes (you can use other potatoes, but I like these best) boiled, peeled, and cut into small cubes (you can cook the carrots and potatoes together)
1/2 pound carrots, boiled, peeled, and cut into small cubes
4 large hard-boiled eggs, cooled, peeled, and cubed
1 can green peas, rinsed and drained
4-5 sour kosher dill pickles (this is important, as while regular kosher dill pickles will work, they are not the same intensity as the sour ones, which are saltier and brinier – as opposed to more vinegary)
1 cup finely diced bologna (about 1/4 pound), or shredded chicken, or diced ham (or purely optional)
1/3 – 1/2 cup mayonnaise (or half mayo, half sour cream)
3 teaspoons chopped dill (optional)
Salt, to taste

1. In a large bowl, combine together the potatoes, the carrots, eggs, peas, pickled and bologna, if using, being careful not to mash the ingredients.

2. Add the mayonnaise (or the mayo-sour cream mixture) and the dill, if using, and toss with the salad ingredients until well incorporated. Taste and add salt, if necessary – the deli pickles are pretty salty, so taste before adding salt to the salad. Refrigerate until ready to serve. Salad should keep 3-4 days.