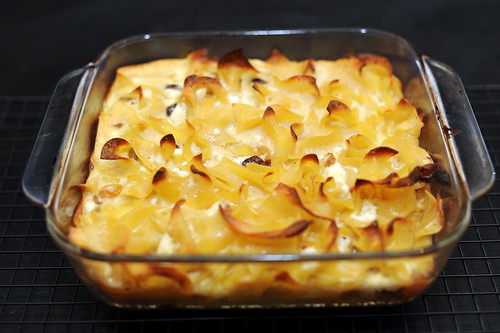 A few weeks ago a reader emailed me and asked me for a recipe for noodle kugel. A delicious mix of egg noodles, cottage cheese, sour cream, cream cheese, eggs, and other awesome stuff, noodle kugel is a traditional Jewish dish particularly popular around the holiday time. Popular, but here’s the kicker – noodle kugel is yet another traditional dish I grew up without. I think this is unacceptable, considering I have some pretty deep shtetl roots to show off. Mom, I’m looking at you – kasha varnishkes, and now this! What else are you hiding from me? This guilt thing, well it can work in reverse too. 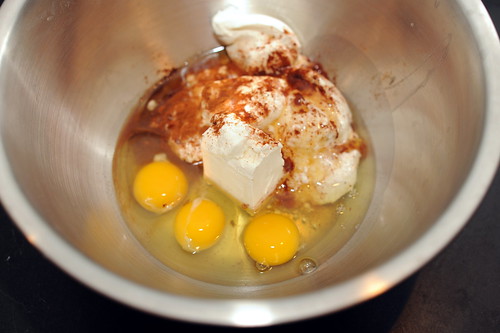 Despite being so deprived in my childhood, I’ve made various versions of noodle kugel before, mostly because friends would ask for it, but, frankly speaking, it always left me wanting more. I was the Goldilocks of noodle kugel. It was either too sweet, or not sweet enough, or too goopy, or too noodly. I was looking for the perfect noodle to custard ratio, and I couldn’t find it. It was never just-right. And though it’s in my nature to challenge notions when I hear the I-don’t-like-such-and-such, for some reason, in this particular instance, I just accepted what I thought was a fact about noodle kugel – it was just one of those things that was never going to excite me. In other words – I gave up! 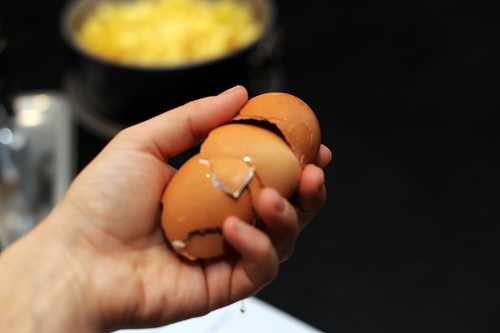 But that email above, gave me pause. Maybe it wasn’t the noodle kugel giving me problems. Maybe it was the fact that I failed to think properly about the recipe. What would make it good? What would make it so good, in fact, that I would want to eat it all the time? This weekend, determined to make it work for me, I got in the kitchen and played around with enough proportions and combinations, that by the time Andrew was up and ready to have breakfast, I had the winning recipe, cooling on the table. Andrew, an experienced noodle kugel eater, pronounced it a success, and I’m hoping he wasn’t just being nice because he ate a pretty large piece. I ate two whole plates, which hardly constitutes a “proper” breakfast, but I felt that given my 7 o’clock waking time and making a few batches, I felt I was owed a “treat”. Owed by whom – I’m not so sure, but owed nonetheless. 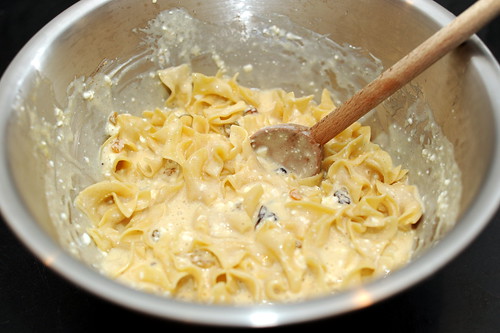 I look back on this year (and by year I mean the Jewish calendar year) and I have to say that the second half of it has been particularly, ridiculously good to me. It’s been pretty much the bees’ knees kind of a year, all in all. With a year like this, I can’t wait for what the new one will bring. On the almost-eve I enter the New Year with a delicious, new recipe I perfected, a new tradition, and some second helpings of noodle kugel. If this is what the year is foreshadowing for me, I can’t wait. Shana Tova. 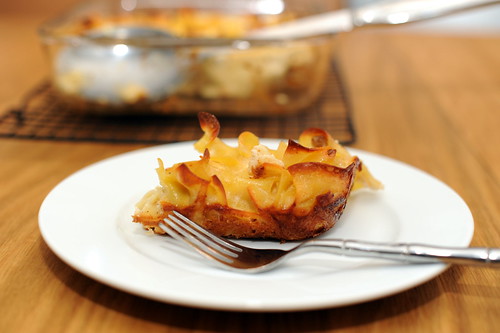 Preheat oven to 375 degrees F. Put 2 quarts of water to boil in a heavy bottomed pot.

Combine the butter, cottage cheese, sour cream, cream cheese, honey, eggs, cinnamon, vanilla extract, dried cherries, and raisins in a bowl. Stir together until it becomes a uniform mass. You might need to use a whisk to break apart the cream cheese, but it should all come together after a few minutes.

Boil the noodles in salted water for about 5 minutes. Drain when done.

Combine the noodles with the above ingredients and mix together so uniformly distributed. Pour into a buttered 8×8 baking dish.

Bake until the egg custard is set and the top turns golden brown. This can take anywhere from 30-45 minutes, depending on your oven.