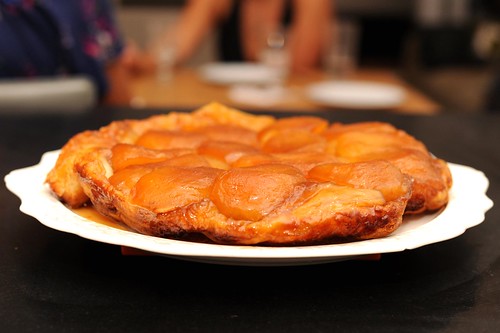 I have been long wanting to make tarte tatin, the French answer to the upside-down cake, but one way or another, it always eluded me. I first had it while traveling through France right after graduating college. A friend and I found ourselves in Nantes, and after speaking with a few locals about where they like to have dinner, managed to find our way to the restaurant. I don’t remember much of the meal other than it was very good, rustic French home cooking. There was little pretense and the focus was on making real, honest food that people might want to eat at the end of a long week. I remember thinking it was delicious. 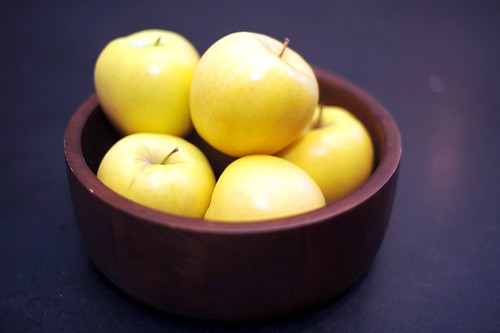 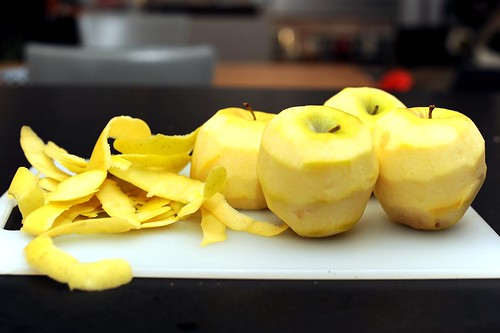 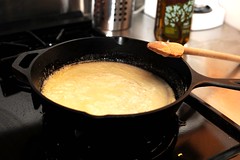 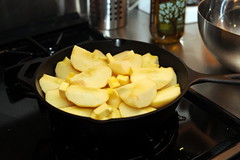 When we got to dessert, I ordered a tarte tatin. I didn’t really know what it was, but I knew I liked tarts, and after our waiter said something about apples, which my limited French picked up, I was sold. I thought what I was ordering was a tradition French apple tart, a favorite pastry of mine. What arrived on a plate (accompanied by a glass of Sancerre) was something altogether different. The apples were not splayed out in a meticulously thinly sliced array, but instead sat atop a pastry – quartered, brown, and caramelized. At their bottom was this thick amber-colored syrup. The puff pastry had soaked a bit of that syrup where the two met. It was a strange and unexpected sight, and before I gave myself a chance to analyze this unfamiliar pastry, I grabbed a fork and dug in. I can still taste that first, revelatory bite. I even remember the plate the tart arrived on – white, with tiny blue flowers around the border. 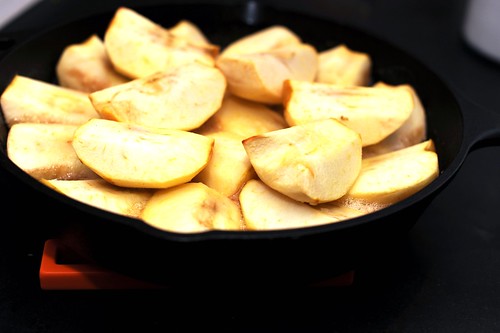 You would think that this would have been the first thing I would have made upon returning to the United States. You wouldn’t think that nine whole years would pass before I’d actually get around to making it. But nine years did pass. I finally got my act together and made the tart for my book club dinner. I am sometimes horribly disorganized, and I have no excuse, just some lost time I need to make up. And so should you. Perhaps this weekend, as you welcome fall, this could be just the dessert to bring to your Labor Day barbecues. Summer won’t mind, I don’t think. It’s had three whole months to reign over us it’s high time to give fall a chance. 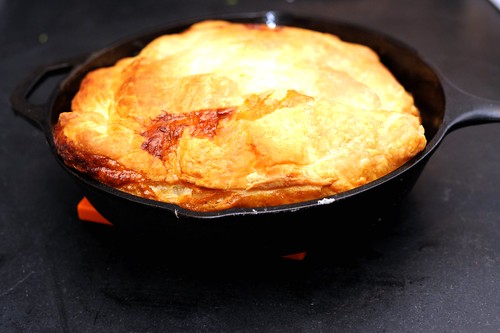 I used Dufour brand puff pastry, which is pricey, but once you try it you’ll agree that it’s worth the expense. [Updated 12/20/18: Around the holidays, US folks can get their hands on fantastic Trader Joe’s puff pastry, which I every bit as good as Dufour at about a third of the price. I recommend stocking up—the pastry should last up to 6 months in your freezer.]

Peel, core, and quarter the apples. Cut the corners of the quarters so they have a beveled edge. In a large bowl, combine the the apple quarters with the lemon juice and zest, and ½ cup (100 g) of the sugar, toss together to evenly coat, and set aside for 30 minutes. The apples, combined with lemon juice and sugar, will give some juice.

Set a 9-inch (23 cm) cast-iron skillet over medium heat and melt 4 tablespoons (60 g) of butter. To the melted butter (be careful not to burn) add the remaining 1 cup (200 g) sugar, along with a few tablespoons of the apple-lemon juice*. Stir to mix until combined. Cook the mixture over medium-low heat, stirring regularly with a wooden spoon, about 15 minutes, or until the mixture is a smooth, pale golden-brown caramel, like the color of honey.

Immediately, remove the pan from the heat. Carefully, as not to burn yourself, place the apple quarters rounded side-down in a circular pattern. Arrange a second layer of apples on top wherever they fit. Dot the apples with the remaining 2 tablespoons (30 g) of butter, cut into tiny dice.

Cook the apples over medium-low heat for about 20 minutes, until they start to soften. Spoon a bit of the caramel over the apples, pressing down gently, from time to time. Make sure the caramel and apples cook pretty evenly throughout—and shift the pan as necessary. When the caramel turns dark amber and thick, remove the pan from heat. The apples should still be slightly firm, but showing some softness about the sides.

On a lightly floured surface, roll out the puff pasty about 3/16-inch thick. With a knife and a 10-inch wide parchment paper circle, cut out your pastry shell.

Carefully, as not to burn yourself, lay your pastry circle over the apples, and tuck the overlap between the apples and the inside of the pan. I found that using a fork to tuck the ends in was helpful.

Place the tart on a rimmed baking sheet and bake the tart for 30 to 35 minutes, until the pastry is golden brown. Remove the skillet from the oven and allow the tart to rest for a couple of minutes. Tilt the pan slightly, and if you see a lot of juice, pour most of it out. A little juice is useful—or the apples might stick to the bottom of the pan.

Place a serving platter over the skillet. With a decisive motion, both hands placed firmly on the 9 o’clock and the 3 o’clock, holding down the plate to the pan, flip the pan over so that the plate is now on the bottom. Gently set the plate down and remove the skillet. Your tart should easily separate from the pan onto the serving plate.

Serve warm or at room temperature. The tart is best the day it is made.

*You’ll have leftover sugar-apple-lemon syrup once you place the apples in the pan. It makes for a lovely simple syrup for cocktails, just so you know. Don’t throw it out!