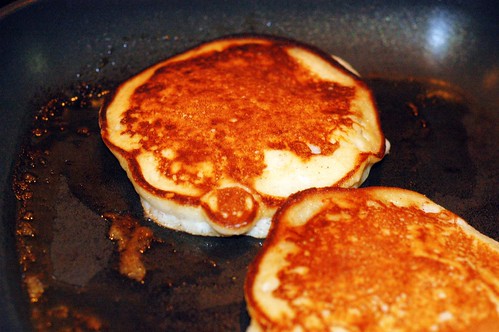 In every relationship there is stuff you agree on, and there’s stuff you work out. If your values and fundamental beliefs are in agreement, provided you share the same goals about your future, things have a much better way of working themselves out. Of course, there’ll be little thing here and there to tweak. Right side of the bed or left? Squeeze the toothpaste from the middle or bottom? Fold clothes neatly and put them away, or throw them on a chair in hopes that they will magically hang themselves?

To all that above, I say, these are the passing, fleeing moments, that while might cause a slight bit of friction for some (though not for all), aren’t indicative of much, or all that weighty. They’re topical, superfluous, and they do not a relationship make. Or break.

There is of course the issue of breakfast. I’m convinced that everyone, and I mean everyone, loves breakfast. Even if you think you don’t love breakfast, you really do, you just don’t know it yet. Brunch, is even a more glorious event combining the growling of a hungry breakfast stomach with a weekend leisure a weekday cannot simply afford. At least for those of us who have to be at work before 8 am. 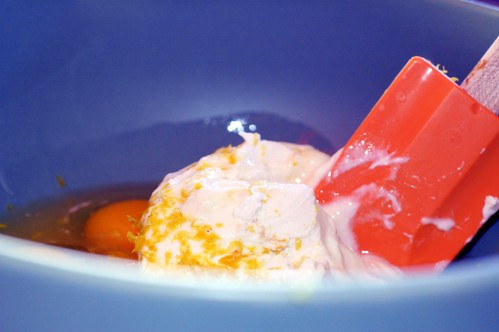 Lucky for me, both KS and I are breakfast people. Hardly a weekend goes by without our morning sit-down meal, which typically, is eggs and toast, sometimes accompanied by bacon, always doused in hot sauce, often served with coffee, but sometimes tea. And jam – jam is key for me, people. And were it not SO economically pointless for me to make it, this site would be full of jam recipes.

But when you dig deeper into the breakfast preference, two camps firmly emerge: the eggs camp and the pancake/French toast camp. I, proudly, place myself in the latter camp, but with a caveat. The pancakes have to be lighter than air, melting in your mouth almost instantly, leaving you with a full, but not a heavy feeling. And that is hard to find. KS, on the other hand is an eggs-for-breakfast devoté, usually preferring them over-easy, sitting atop a toasted bread. 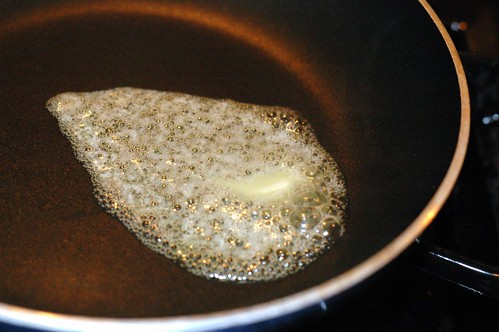 And since you can’t really just make pancakes for yourself, seeing as the smallest batch of batter feeds at least 2-3 people, we rarely, if ever make them at home. But a few months ago (yes, months, I am this backlogged), I convinced KS that we had to have lemon ricotta pancakes for breakfast. This was right after our trip to the Bowery Kitchen Supplies, housed in the Chelsea Market building, where we stopped at an Italian grocery store and I went crazy with glee, picking up creamy ricotta among other items. The ricotta was begging to be cooked, and who was I to refuse it?

And so I did some research online and approximated which recipe out there (as there are many) would produce the lightest, fluffiest, most delicious pancakes. And the winner was Bobby Flay, who has yet to fail me with his amazing take on recipes – the man is a genius, really! And while I tweaked the recipe a bit, I have to credit him with the inspiration and the base. These were truly the most incredible pancakes I’ve ever had. I won’t tell you how many I had, but it was a bit embarrassing, as I had more than a few. 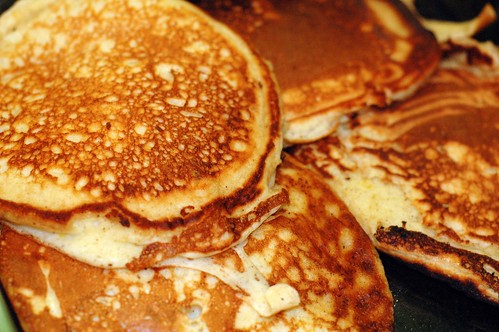 I took out the lemon curd altogether. I don’t know if it’s just me, but anything that has a name “curd” attached to it, is an automatic turnoff. Maybe because it rhymes with “turd”? Who knows, really? I also used buttermilk instead of milk, because I find that the tingly sour taste of buttermilk makes the pancakes softer, lighter, full of air. Milk tends to bring out the heaviness in pancakes.

And since it was a gloomy, sunless, cold winter day, anything lemon flavored was akin to letting a little bit of warmth, sun and the promise of spring into our winter existence. And for me, it was the next best thing.

Whisk together the cheese, eggs, buttermilk, lemon juice and zest in a large bowl.

Whisk the flour mixture into the wet ingredients until just combined.
Brush the hot griddle with butter. For each pancake, pour approximately 1/4 cup measure of the batter on the griddle and cook on both sides until light golden brown. Repeat until no batter remains.

Top with fresh raspberries, and sprinkle with confectioners’ sugar.