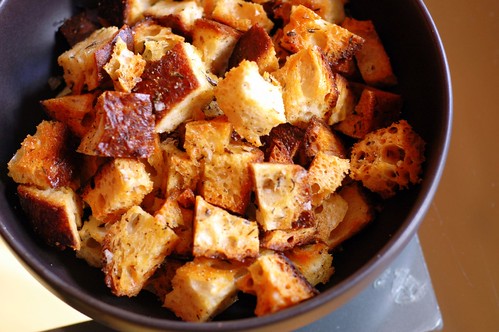 One of my grandmothers lived through the siege of St. Petersburg
during the WWII. She watched her mother, among others, starve to death
and was lucky to make it out alive. I have few stories of her
experience during the war, as she doesn’t like to talk about it. And
while she doesn’t try to forget it, she is certainly not eager to dig
up and unearth those painful memories. I used to want to find out, but
I figured she’s earned her right to silence – she’s 93 years old,
after all.

Living through the war, when the daily rations of bread, bread that
was mixed with woodchips to increase its density and decrease the
flour content, were sparse; and after the war, when food supplies were
still limited; taught my grandmother not to throw out even food that’s
gone spoiled. She always tried to rescue it and always insisted that I
cleared my plate during a meal. She wasn’t the greatest cook, but
having experienced hunger unlike anything most of us have ever felt,
she just couldn’t bring herself to throw food in the garbage.

So naturally, when our bread would go stale, we wouldn’t dare throw it
out. We’d cut it into tiny cubes and toast them in the oven with salt,
until they got hard and crunchy. These were tiny Russian croutons –
“suhariki” as we called them – made primarily out of Russian rye
bread, the same kind you can now buy in most Russian stores. They look
like big, fat bricks and when fresh, smell like heaven. When our white
bread would go stale, we would sprinkle the cubes with milk, and shake
a mixture of sugar and cinnamon over them before sending them off to
the oven. I can’t even begin to tell you how good these sweet croutons
tasted! 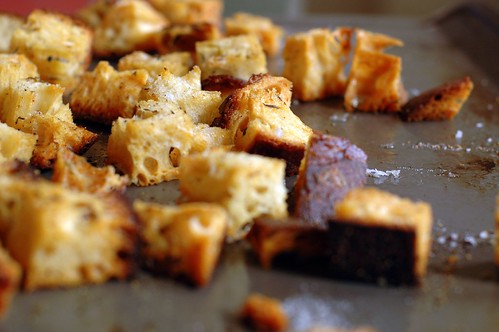 You’d think that this easy, practical tradition would stick with me,
but I cannot remember my mother or me making these croutons since we
arrived in the United States. In fact, I think I pretty much blanked
out on this treat until last week, when we had some sourdough bread
and I was lamenting that it was past its prime. KS, the practical boy
that he is, suggested I toast them in the oven to make homemade
croutons! And I jumped on the idea because it was so simple, so
practical and so tasty. So, credit him for the ingenuity!

I am on a cayenne kick lately, and KS loves the spice so much, he’ll
never complain about its presence in practically anything, so why not
give my croutons a little personality? I gave the bread cubes, also, a
generous sprinkling of extra-virgin olive oil, sea salt and rosemary,
before sending them to a dry-heat sauna.

I suppose it’s fitting then, that around Russia’s V-Day, perhaps as a
tribute, I post about not wasting foods that are too easily put in the
garbage, even though it’s very easy to save them and create something
altogether. And what is more fitting to salvage than bread – the
staple of so many diets?

Preheat the oven to 325 degrees Fahrenheit.

Mix the ingredients well in a large bowl, letting the olive oil coat the bread cubes – add more if you feel that some bread cubes aren’t getting the love.

Spread the coated cubes on a baking sheet and bake in the oven for 15 minutes. Let cool and enjoy in salad, soup, or as a snack – the cayenne gives it a nice kick, so if you’re spice-shy, careful with this one!