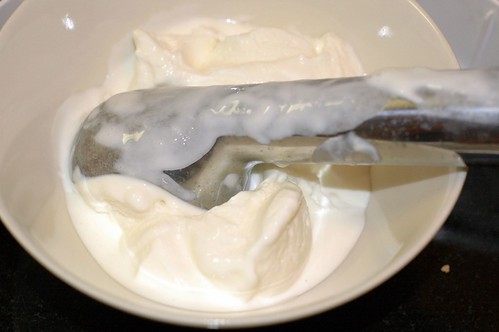 I first heard about it on the Ellen show – she was raving about this frozen yogurt from a company called Pinkberry – it was amazing, she said, and best of all, fat free. I had to roll my eyes at the television screen – another celebrity endorsement, another fat-free treat – it’s probably not even yogurt! But Ellen went on and on and on about it, how good it was, and how tangy and fresh the yogurt tasted and oh, what fresh toppings they had; and before you know it, the name had tattooed itself inside my brain. At the time, this was only an LA sensation and I felt well-insulated from yet another overhyped franchise, especially one that reminded me of Tasti D-Lite – a company whose product I loathe almost as much as I loathe high-fructose corn syrup. But that’s for another time.

Then one day, while visiting KS’s father’s apartment his little sister brought up Pinkberry – and how good it was. “Did you try it while in LA,” I inquired. “No,” she said, her eyes glowing, “they have it in Chelsea!” And so one lazy morning, en route to work in a cab (okay, so it wasn’t lazy, just freakishly cold!) I spotted it on 8th Avenue. The cute pink and green letters, the toy-like design, and made a mental note. A few cold, seemingly interminable months later, we finally found ourselves taking a stroll in Chelsea and passed by the location. And I, of course, had to go in! Even KS, normally abstaining from dairy desserts (oh lactose intolerance, how cruel you are!) made an exception and sampled the frozen yogurt treat. The moment the frozen yogurt hit my palate, I became obsessed. It was so good, I could not get spoons fast enough in my mouth, where the yogurt disappeared quickly, leaving me with a stupid happy grin on my face. 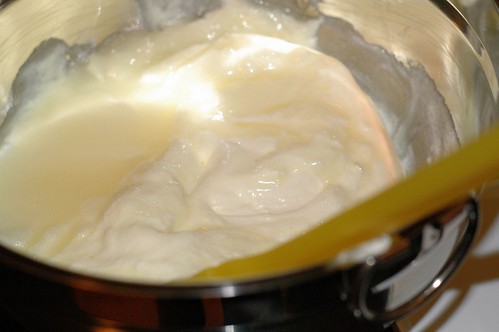 It was as if my taste buds had woken up from some sugar-laden nightmare and unanimously agreed – this is what frozen yogurt SHOULD taste like. There was a reason I couldn’t stomach the overly sweet frozen yogurts out there. And right then and there, I decided – an ice cream maker this summer is a must. And then, Heidi had to go and write about how good and easy making frozen yogurt was at home, and referenced David’s book. And I found an ice cream maker on sale for $30 (that’s, like, free!) and while I cannot exactly remember hitting submit on my book order (something about selective amnesia is kicking in), Amazon.com did deliver The Perfect Scoop as well as my next favorite cookbook. And I’ve been flipping though the books nightly salivating over each page.

So last night, after my ingenious salad creation – who knew leftovers could be so delectable – and some planting-in-the-dark (oh, that’s a story in and of itself) – I was all but finished with the kitchen. And so I gave this basic frozen yogurt recipe a whirl. Now, some people follow the recipe first time to a tee, but I, on the other hand, always like to tweak them my own way. Not so this time, aside from decreasing the original amount of sugar by a half, and mixing two parts of strained yogurt with one part regular plain yogurt, I followed this quite meticulously. I even was able to assemble and start the ice cream machine without it freezing the paddle to itself – an accomplishment I was extremely proud of!! Forty long and arduous minutes later, KS and I both had heaping bowls of frozen yogurt on our laps. 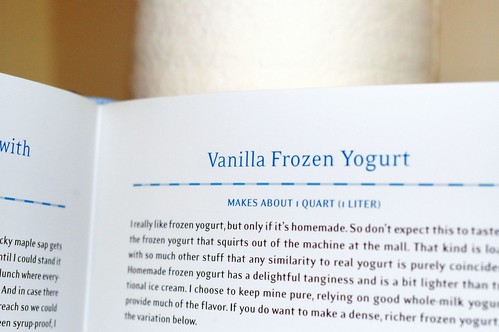 And man. Was. It. Good. So good in fact that I licked the bowl! Pinkberry who??

And now I just can’t get over how incredibly delicious it was. I’ve been thinking about having more since yesterday morning and couldn’t leave the house without shoving a few spoonfuls in my mouth – breakfast of champions I know – and then at night, on my conference call, I was being so loud with my spoon knocking against the dish, I woke KS up.

I just have this feeling that by the end of summer, David’s book will have been loved well and used backwards and forwards – and the pages might just get stuck together from my sticky fingers, and I might have to get myself another copy! There will be a lot of frozen dessert consumption in this household in the next few months. 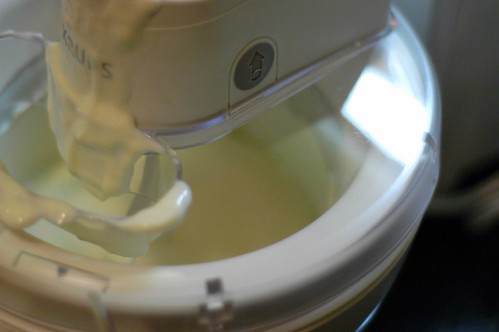 Perhaps putting in an elastic waist in all my pants might be a good idea for this summer. That and attaching my name tag on a treadmill at the local gym.

Mix together the yogurt, sugar and, if using, vanilla. Stir until the sugar is completely dissolved and place in the refrigerator for 1 hour.

Freeze in your ice cream maker according to the manufacturer’s instructions.

For this recipe, however, I couldn’t resist tweaking a bit. I pared down the sugar to 1/2 cup, which was more than enough, I think. And I combined 2 cups of strained yogurt and 1 cup of plain whole-milk. I’m a huge fan of Ronnybrook Farm dairy products, so I try to use them as much as possible.