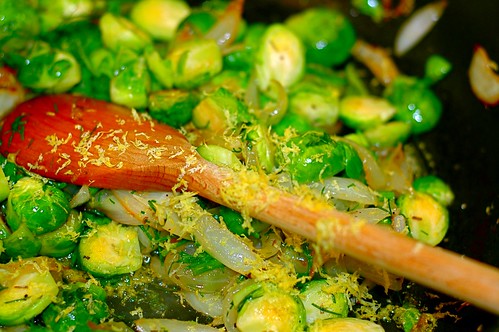 Happy belated New Year to everyone – I included the picture above because the lemon zest looked so much like confetti, it reminded me of a celebration! I’ve been quite absent from regular posting having had an unprecedented month of work, travel, being sick.

I’ve been cooking not as often as I’d like. It’s been cold. We’ve been attending holiday this and holiday that. We went to Texas and ate barbecue and I lost my voice and had to get antibiotics and was called for the rest of the trip the Christmas Mime (because I could mime oh-so-expressively). So one of the New Year’s resolutions is to post more regularly! And take better pictures. And get some more camera equipment like a sexy macro lens I’ve been eyeing and a flash! All thanks to a more than generous B&H gift certificate from KS’s dad’s family, I can now indulge in those items! Oh, I can’t wait!

There are also design tweaks in the works. They’re so late in arrival that I wanted to keep this an absolute secret from you, but I am hoping that very soon, you’ll see a much sleeker version of SassyRadish! 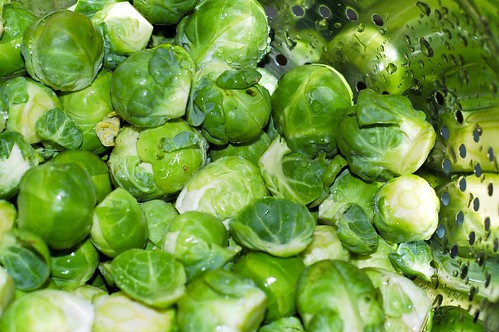 Some other resolutions involve my being more web savvy, learning CSS, understanding the intricacies of MT 4.0 and becoming my very own web designer extraordinaire! With the new addition to our household, our iMac looks very inviting and promising, if this can’t make me more design-literate, all hope is then lost.

I know that I’ve already written about Brussels sprouts recently and it’s one of those been-there-done-that stories, but really I can’t get enough of those miniature cabbages! They are soooo cute! And soooo good! And as one of my resolutions last year was to use the produce already in my fridge, no matter how much the glossy recipes call to me. And so with five pounds of Brussels sprouts from Satur farms, something had to be done. Half of them went into the recipe here, and another half became part of the chicken stew I’ll write about soon.

What are some of your New Year’s resolutions? And what would you like to see on this site? Could be more recipes of a specific type, like “More Russian food!” or better functionality (like a recipe index!) or better photography, punchier writing, or something else! Please give suggestions and don’t be worried about hurting my feelings. If there’s something about the site that drives you crazy, let me know as well!

In a non-stick skillet over medium heat, melt the butter and olive oil and add herbes de Provence and a minute later, the onions. Saute the onions until they are golden-brown salting them lightly in the end.

Add the Brussels sprouts and the lemon juice and saute for about 7-8 minutes until the green color becomes brighter and more intense. Add the lemon zest and mix well in the pan reducing the heat to low. Cook for 1 more minute and remove from heat.

Season with salt and pepper to taste and serve immediately.