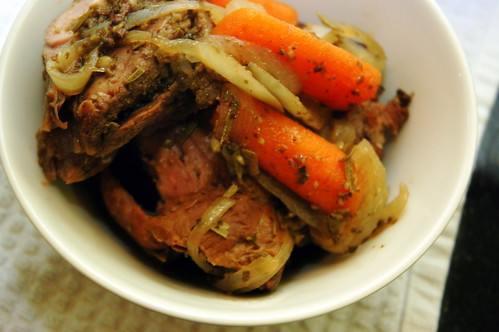 I’m not sure how to segue into this post I’ve written and rewritten this post nearly half a dozen times and I’m just not feeling it. Perhaps because making this dish left me pretty bleh to begin with. Not terrible, not great – it was simply “meh” on the scale of “ewww” to “mmmm”. It was just so-so. And it was largely my fault.

I’m very picky with lamb. Almost ridiculously so. Back in high-school when I ate Easter dinner with my then-boyfriend’s family, it was the one holiday meal I kind of dreaded. Out of politeness for the mother, I would break my strict vegetarianism to take a symbolic bite sized piece of lamb, flavored only with salt and rosemary. But what made me quiver was the mint jelly, which to this day reminds me of eating toothpaste. But give me a fragrant Uzbek plov, or Persian manty, and I can’t get enough lamb. It’s all in the flavoring I suppose. Like I said, I’m tricky with this meat. 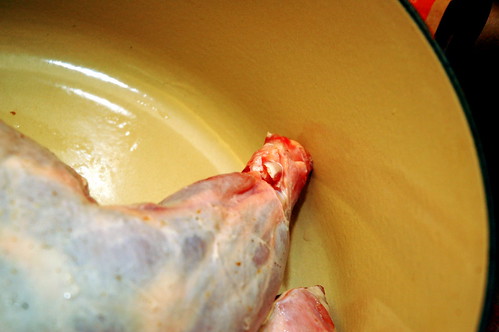 And so when KS and I picked up a leg of lamb (on sale!) at Whole Foods on Sunday, fresh from our Carribean get-away and eager to fill up our fridge and pantry with edibles, I was rather indecisive of how I wanted to cook it. 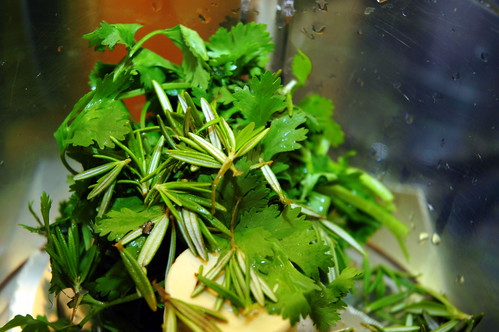 After failing to find a recipe I liked, I decided to marry a few of my own. I was going to braise the lamb in beer, but add more spices and herbs than what the recipe called for. And perhaps that’s where I went wrong because the dish just didn’t know what it wanted to be. And so it was just so-so.

Tyler Florence recommended a Roast Leg of Lamb with beer, honey and thyme and while I liked the idea of beer, but not of honey or thyme. Another recipe with my favorite Alton Brown, suggested a grilled leg of lamb with pomegranate molasses. But we lacked an indoor grill, and for some reason, KS is not a fan of sweet/salty combinations. I managed to sneak some of it in anyway and he still doesn’t know about it (or he will once he reads this post).

We ate this dish in its entirety and are completely now lamb’ed out. And though this recipe was a bit of a letdown, the couscous I made along-side it was nothing short of incredible. But that’s for Sunday night. We’re off to DC for a wedding some the cherry blossoms festival. If anyone has any fantastic brunch recommendations in the Georgetown area or beyond, please let me know! 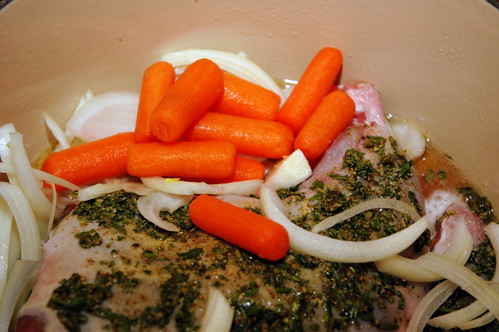 Open the leg of lamb and season the inside with half the garlic, half the thyme leaves, cardamom, cinnamon, rosemary, pepper, cilantro, 1 tablespoon olive oil, salt, and pepper. Tie the lamb closed with string. Place it in a roasting pan, season with salt and pepper, and brush it with olive oil. In a bowl mix the beer, honey, remaining garlic and thyme, juniper berries, and bay leaves. Pour this over the lamb and put the roasting pan into oven. Throw in sliced onions and baby carrots.

Immediately turn the oven down to 325 degrees F. Baste every 10 minutes. Cook 12 to 13 minutes per pound for medium rare or until internal temperature reaches 130 to 135 degrees F. Remove the roast from the oven, cover it loosely with foil and allow it to rest for about 10 minutes before carving. Serve with pan drippings.