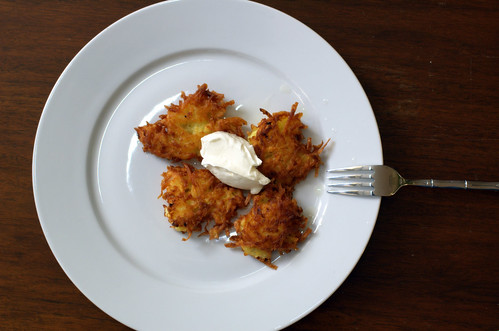 While I am delinquent with telling you about an ingenious way to reinvent your turkey after Thanksgiving, because let’s face it, turkey leftovers can only get so exciting, I am way ahead of schedule in prepping you for the holidays. And here it goes. Hanukkah or not, I have not met a soul who doesn’t like latkes. And what’s not to love? Crispy, fried, and if done right, lacy pancakes that melt in your mouth. And a Hanukkah with out latkes is like Christmas without a Christmas tree – it’s a must. For all the various latke recipes out there, including the permutations with sweet potato, zucchini and other vegetables, I hold the classic potato recipe near and dear to my heart. A classic is a classic for a reason – its sheer simplicity and elegance outshine any attempts for a trendy update. 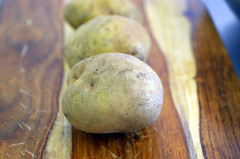 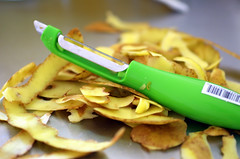 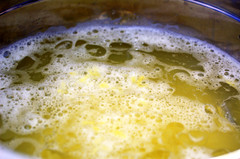 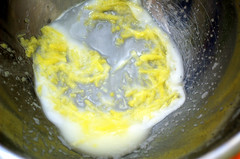 Ironically though, it is the simplest and most elementary of things that are at times hard to get just right. I’ve had my fair share of latkes – some good, some bad. The really heavy ones drenched in so much oil, you wonder where the potato went, the really bland mushy ones that aren’t at all crispy, really good ones you pile a ton of sour cream on (I didn’t grow up with apple sauce on my latkes and I still don’t enjoy it). 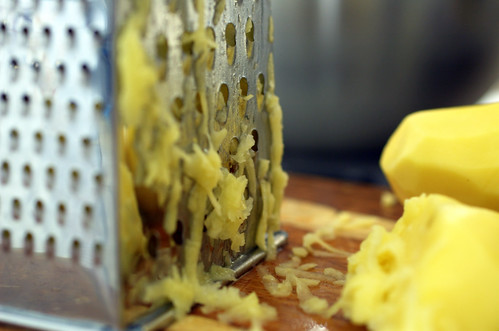 But this recipe has completely flipped my latke world upside down. I’ve never had latkes so good and the fact that I ate the entire batch I made in just about one sitting is proof enough. I even called my mother to tell her that our family recipe, which I boasted as being the best – was going to have to take a backseat to this one. Martha Stewart, yet again, has exceeded my expectations – because her latkes recipe (her mothers, in fact) is tremendous. Perhaps, it is because she ingeniously figured out a way to decrease the amount of moisture, while maintaining the same starch ratio, which makes the latkes extra crispy. Also, no matter what anyone tells you, you should hand grate the potatoes using the coarse side of the grater. It only takes a few minutes more than the food processor, and the results are a lacier latke, which means a crispier, more delicious latke. 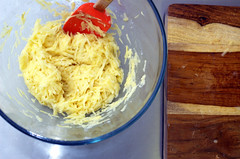 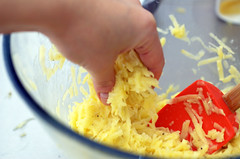 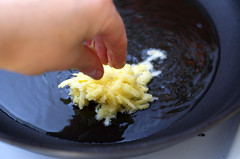 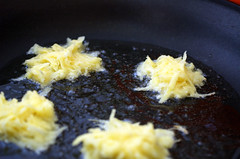 Of course, that means you are in danger of eating your own batch and not sharing with anyone. Hardly a problem in my book, especially if you have plenty of sour cream on hand. 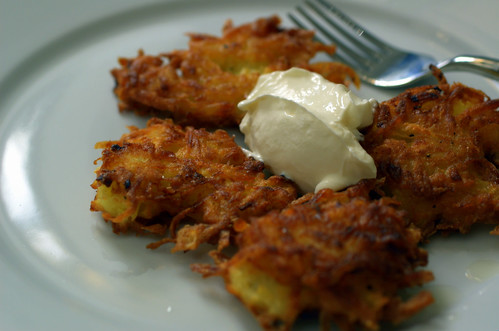 1. Preheat oven to 200 degrees [F]. Shred potatoes using the large holes of a box grater into a large bowl of ice water. Alternatively, place half the potatoes in the bowl of a food processor fitted with the shredding disk attachment and process until shredded. Repeat process with remaining potatoes; transfer to a large bowl of ice water. Let stand 5 minutes to settle. Using a strainer or slotted spoon, transfer potatoes, reserving liquid, to another large bowl lined with a clean kitchen towel; gently squeeze dry. I find that it’s a less painful on your hands if you do this wearing rubber/latex gloves; otherwise the ice water really stings after awhile.

2. Set reserved liquid aside for 10 minutes to allow starch to sink to the bottom; carefully pour and discard the liquid from the bowl, reserving milky residue (potato starch) at the bottom. Transfer potatoes back to bowl with potato starch.

3. Add onions, eggs, flour, salt, and pepper to the potatoes and mix to combine.

4. Line a baking sheet with paper towels; set aside. In a large, heavy skillet (such as a cast iron), heat 1/4-inch of oil. Spoon scant 1/2 cup of potato mixture per pancake into skillet, working in batches and taking care not to crowd the skillet.

5. Fry latkes on both sides until golden brown, 4 to 6 minutes. Transfer to prepared baking sheet to drain; and place in the oven to keep warm. Repeat the process with the remaining potato mixture. Serve hot with applesauce and/or sour cream if desired.