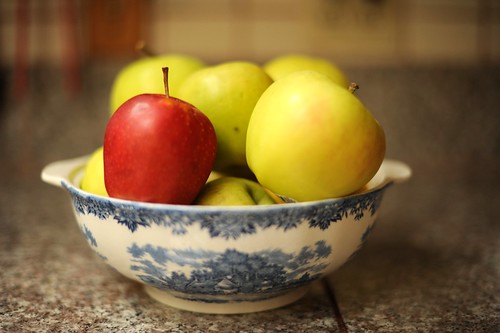 And so we’ve officially ushered autumn in. Everywhere I turn – apples, apples, apples. Everyone keeps telling me about apple picking, my farmers market has more apple stands than I know what to do with, and I’m coming into a small apple fortune come Monday night when a friend plans to bicycle over a portion of her forty pound bounty, and I’m hoping to get busy with some apple butter, which reminds me I should get a food mill and some Bell jars stet.* But that’s a story for another day. Today is all about apple sauce that I made while at my parents’ house a few weekends ago. 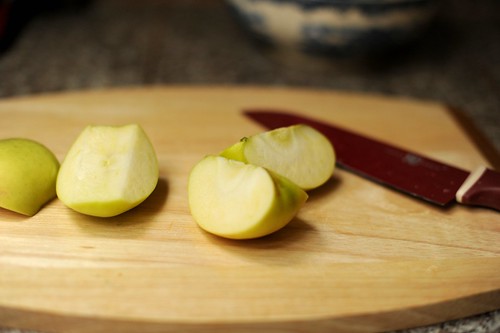 You see, my mother, like me, gets overly excited about fall produce and before she knows it, her house is drowning in apples as if she’s about to start her own apple stand. But you and I both know that a human being can only eat so many apples a day and before you know it, they start to get all mushy and mealy. And then you throw them out, and that’s just tragic. Tragic, I say. 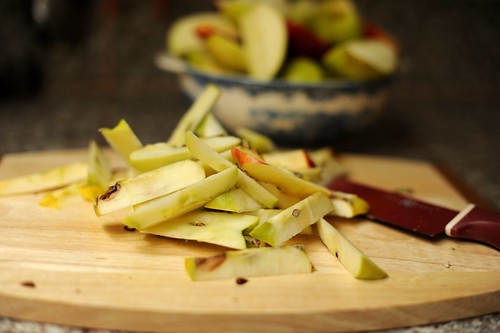 So I found myself staring at piles of apples that I knew, (just knew!) were going to go to waste and that my mother would kick herself for allowing that to happen. I figured apple sauce might be a fun way to use them, and since I’ve never actually tried my hand at it, I decided to trust Elise’s recipe (since hers never fail me) and attempt one of my childhood favorite treats. So while my mother was napping, or running errands (I can’t recall which), I grabbed some apples and got to work. And by work I mean I cut and cored the apples, threw them in the pot with the remaining ingredients, brought everything to a boil, reduced heat, and let everything simmer for half an hour. In fact, while the apples were cooking, I got started on dinner and didn’t even tend to the pot once. Not a single time. 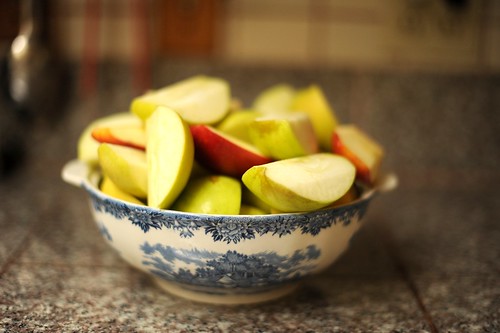 If I’d known apple sauce was so easy to make, I would have never bought it in the first place. And the taste, the flavor, the apple-y intensity that a pre-made version can’t even approximately deliver – are well worth the minimal effort apple sauce requires. Besides, no scented-candle can make your house smell as cozy and welcoming as that cinnamon-apple smell that will envelop your house. If anyone finds a way to bottle it, let me know – I’ll be your first customer! 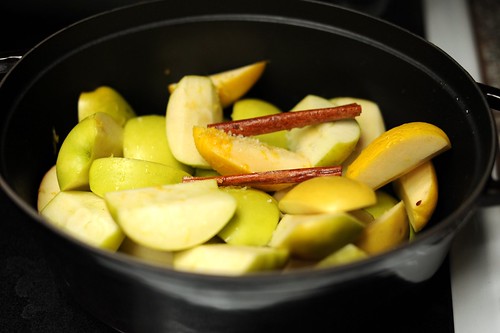 *Whoa, that was a long sentence!

Ingredients:
4 lbs cored, and quartered apples, like Ginger Gold, Macintosh, Cortland (you can peel them first, but I like fishing the peels out with tongs, later once cooked because I find it to be much faster than peeling – read on)
4 strips of lemon peel – use a vegetable peeler to strip 4 lengths
Juice of one lemon, about 3-4 Tbsp
1 cinnamon stick (or 2 short ones, in my case)
1/4 cup of dark brown sugar
1 cup of water
1/2 teaspoon of salt

Put all ingredients into a large pot, cover it, and bring to a boil. Immediately reduce the heat, and let the ingredients simmer for 30 minutes. The apples should be quite soft at this point and falling off the peels. You should be able to take your tongs and fish out the apple peels one by one – it should take you about 5 minutes, as opposed to however long it takes to peel the apples. I find that the “fishing out” is significantly less time consuming. Call me lazy.

Remove the apple sauce from heat and discard cinnamon sticks and lemon peels. Mash with potato masher until apples become pureed-looking with tiny little lumps. If you like your apple sauce to be silky smooth, you may puree it in a food processor, but I like mine slightly chunky.
Serve warm, at room temperature, or chilled.

You can also freeze apple sauce and use as needed. Frozen it should last up to a year, but with apple sauce this good, you can hardly expect it to linger in your freezer that long.