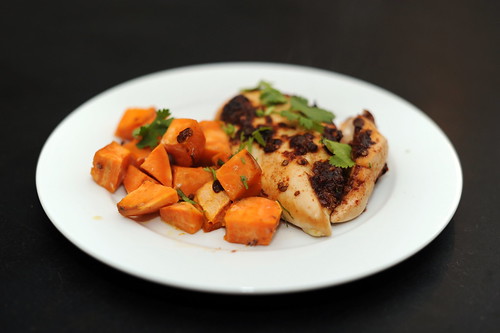 At times, I think Melissa Clark and I share the same palate. Hers are the first recipes I unwittingly click on while reading the Dining section of the New York Times. Somehow we’re attracted to the same flavor combinations and meals. And I’ve cooked so many of her recipes over the years, I’ve yet to make something of hers that doesn’t taste good. I normally read her column, “A Good Appetite” over coffee, having just arrived to work at an ungodly hour, and thinking that all I wanted to do that morning was go home and cook her recipes. Melissa’s food is always approachable, honest, without pretense, not gimmicky, but always with a touch of whimsy. It’s simple, but not not simplistic. There are no semi-made shortcuts – just real food for real people who love to eat well. 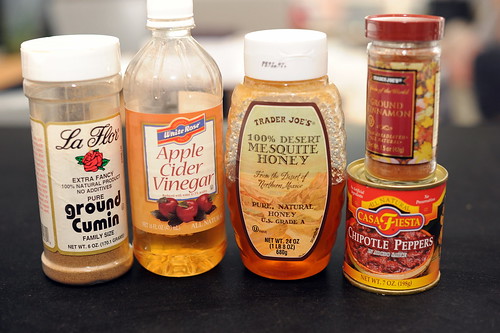 When I learned that Melissa was coming out with her own book, titled after her column, I knew it was a book I had to own, and I had a feeling that I’d want to make everything from it. Now that I have the book – I can tell you in all honesty, I want to make everything from it, and I know that eventually I’ll cook each recipe, because I’ve yet to find one that doesn’t make me hungry. This is the kind of cookbook I’d want to write – with recipes that inspire – not intimidate; with stories preceding each dish, as if Melissa was in kitchen with you. The stories connect you with each recipes, often in the same way that our own experiences with food do, reminding you how some recipes come to be, how traditions are passed on from generation to generation. 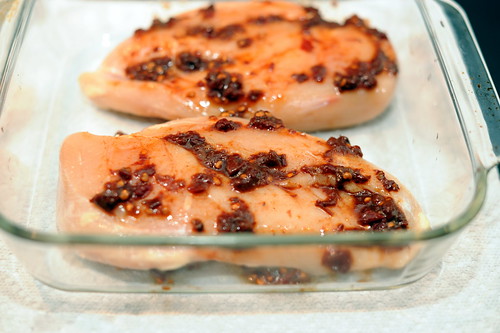 The only problem with a book like that is having an impossible time deciding on which recipe to make first. Since I’m always undergoing some kind of analysis paralysis, I wasn’t really sure where to start, but something caught my eye – chicken breasts in honey chipotle glaze. You see, I am a dark meat chicken eater. To me, a chicken breast is something that will always hold way less appeal than a thigh or a drumstick. When I think white meat, words like “dry” or “saw dust” inevitably come to mind. In Russia, dark meat was prized far above the white, and was always set aside for children. Since chicken was sold whole and had to be quartered manually, we normally wound up with two breasts, two thighs, and two drumsticks. Someone would get stuck with the breast meat. That poor sap! 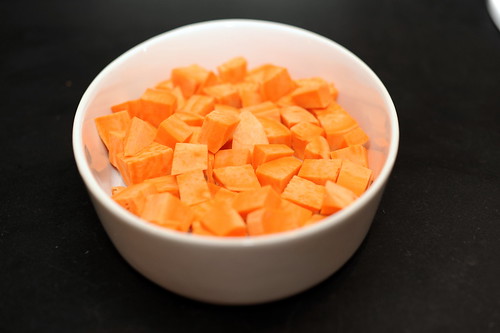 Imagine my mother’s surprise, when she discovered that chicken parts in the American supermarket were priced to her advantage. Chicken breast often cost two to three times as much as drumsticks or thighs. For a family that was pressed financially, we got to eat a lot of chicken. Except this time, with the abundance of affordable chicken dark meat, no one had to give up anything, and get stuck with the dreaded breast.

And I’ve been leaning towards dark meat so much for the most of my life, that I’d forgotten people might have other preferences. So imagine my surprise, when Andrew, sheepishly asked me to make something with white meat for a change! And that’s when I spied Melissa’s recipe for chipotle-honey chicken breasts. What sealed the deal was her vignette preceding the recipe – where she shares that her preference is so much more for the dark meat that there’s only one breast recipe in the book! I figured if that’s the recipe that made it into the book – it must be amazing! 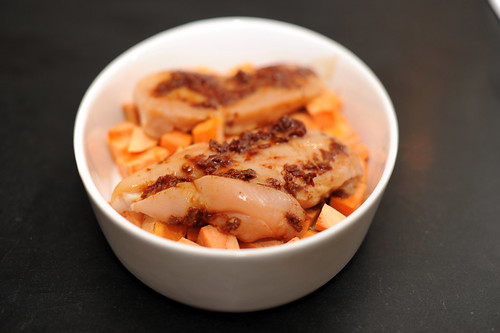 And it was. The breast was anything but dry, and was instead sweet, smoky, spicy. Andrew was a happy camper and I was pleasantly surprised. We I licked the baking dish clean, and I was sad that I’d only made enough for two people. I would have loved leftovers. But I can’t just get distracted by one recipe. There are one hundred and forty nine other recipes I really want to make. I best get on it.

In a small bowl, stir together the 1 tbsp olive oil, chipotles, garlic, honey, vinegar, salt, cumin, and cinnamon to make a paste. Place the chicken into a plastic bag (like a storage-size Ziploc) and dump the chipotles mixture into it. Squish the paste and the chicken so that the chicken is fully coated. Squeeze most of the air out of the bag and chill for a few hours and allow the flavors to develop and penetrate.

When ready to cook, preheat oven to 400 degrees F.

Toss the sweet potatoes in 2 tbsp olive oil and scatter on the bottom or a roasting pan. Roast for about 15 minutes.

Place the chicken on top of the potatoes and continue to roast until the chicken is just cooked through. About 25 minutes additionally. Serve garnished with cilantro.