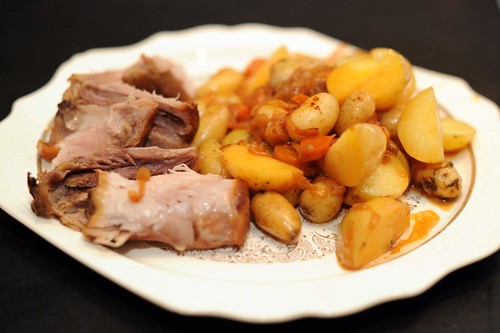 Perhaps because I wasn’t reared in the culture of pork eating, I am at odds with the animal. It’s not like I didn’t have pork growing up – I remember slivers of lardo and slices of speck, and an occasional pork loin, slow-cooked, studded with garlic cloves and bay leaves. There might have been a cutlet or two in there somewhere. But pork, at least in my memory, wasn’t a staple in our household in Russia, and became almost non-existent the minute we landed in America. My father, for reasons he still can’t furnish, considers pork to be somehow less kosher (or more unkosher, to be exact) than other tref foods. His ruling was final – pork was out – and so it didn’t enter our house unless my mom and I snuck some in, mostly in the form of bacon. 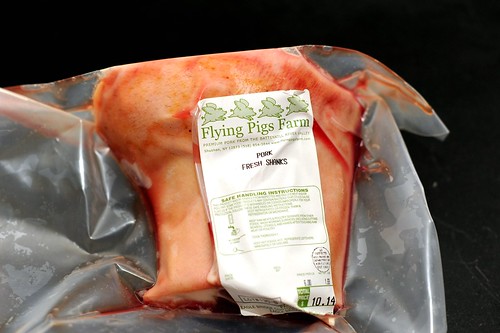 And so, based on this history, I’m really weird when it comes to pork. Really, oddly, inexplicably weird. First of all – we must exclude bacon from the pork umbrella. Bacon is special and is a food group in and of itself. So is speck and lardo and other cured meats like prosciutto. But other stuff is fair game. Pulled pork sandwich? Yes, please! I’ll take seconds too! Pork chop? No, thanks. Pass. Yawn. Pork cutlet? Pass, again. How about an apple-cider braised pork shoulder? Um, here’s my plate, please pile some meat on it! Confused yet? 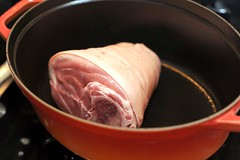 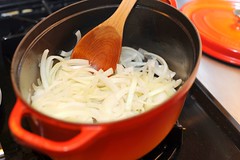 I guess it’s all about texture for me. Slow-roasting and braising slowly wears the meat down, so that the tough, chewy texture yields itself to something soft, nearly melting, falling off the bone. And I also prefer fattier cuts of meat: chicken drumsticks over chicken breast. I always remember what my grandmother would say to me while she cooked – that we must cook with patience. And though I think she was implying about patiently learning and perfecting the craft, her words make sense here too. 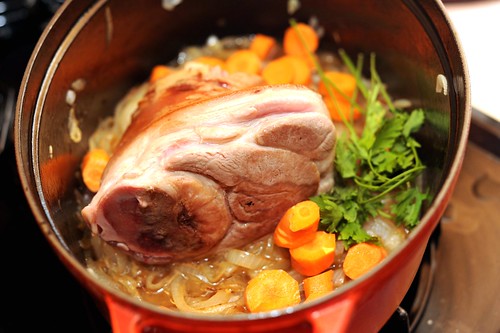 Giving meat time to realize itself, if you will, while coaxing it into a gentle state, requires low heat, time, and patience. I look at it as a golden opportunity to do something else in the meantime, like read a book, clean the apartment, or watch a movie. The hands-on time is minimal because if you just let the heat, the braising liquid, and the aromatics do their work, they make good friends with the pork shoulder – and the whole definitely becomes greater than the sum of its parts. This was a treat for us one fall day when temperatures turned unusually blustery and we pulled out sweaters and cords. We took a walk before breakfast, and upon coming home, settled into our now-comfortable and comforting Sunday routine. Andrew – at the computer, writing his weekly column, and me in the kitchen, fixing our Sunday supper. 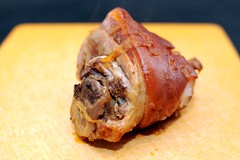 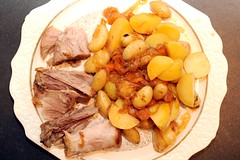 And though Andrew grew up with similarly pork-limited household and has the same reservations (and passions) as I do about the meat, he had no problems with this pork shoulder. The trick was to cook it slow and steady. I dropped the heat to 300 from the suggested 325 and cooked a half hour longer. The result was meat that fell apart as soon as I tried to slice it onto our plates. It made for an ugly looking dish, but one that we still devoured in a heartbeat. The cider cooked down, and along with caramelized onions, which, in the process, melted into the braising liquid, infused the pork with the most unadulterated taste of fall. I can most definitely get used to pork like this – no reservations.

Score fat and any skin on pork in a crosshatch pattern – making x’s in the meat with a paring knife. Cut slits all over meat with a small sharp knife and place a garlic sliver into each slit. Pat the shoulder dry and season liberally with salt and freshly ground pepper.

In a 4-5 quart oven-proof heavy pot (such as this) heat oil medium-high heat until hot. Make sure the oil doesn’t smoke but will sizzle when you place the pork should in the pot. Brown meat on all sides, turning occasionally for about 8 minutes. Transfer pork to a plate and set aside.

Add cider to the pot, and place the pork back in the pot.

Cover pot with a tight-fitting lid and braise pork in middle of oven until very tender about 3 – 3 1/2 hours.

Transfer pork to a serving dish. Reduce your braising liquid by boiling the cooking juices for about 5 minutes, or until reduced to about 2 cups. Season with additional salt and pepper, if desired, and serve alongside pork.