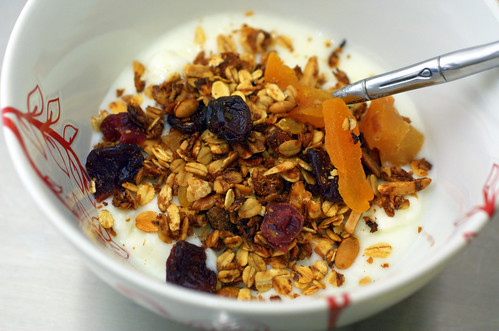 Oh I am so tricky with granola, I don’t even know where to begin. Granola is one of those foods that you know you should like because everyone likes it and because it sounds like something that you should like because it has oats and some fruit and overall it’s kind of good for you. And if you like the parts separately, shouldn’t you like the sum of them? Apparently, not if you are me. 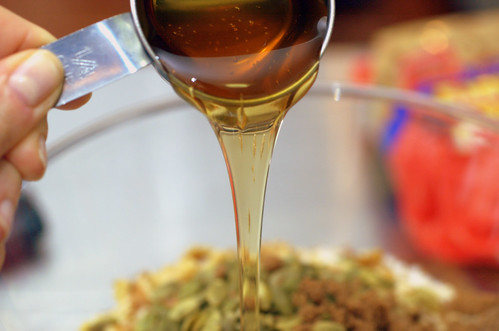 For years, I’ve struggled with my secret granola loathing. Years. I felt pressured to like it because everyone around me did. But I found it either too greasy, or too sweet, or to clumpy or too tough. And sometimes, it would be awfully chewy and it would stick to my upper teeth, which would then cause a wrestling match between my tongue and the pieces that lodged themselves there – and inevitably the pieces would win, and I’d give up. I tried various brands of granola, from the mainstream, to the new and small-batch made, and found nothing that was truly exemplary. 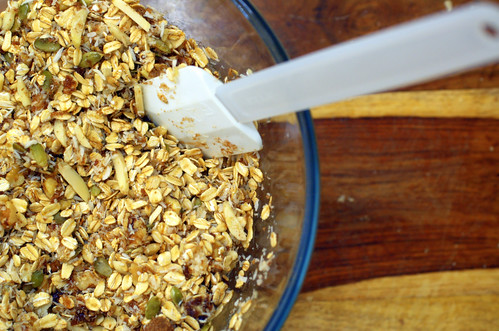 But about a year ago, a friend gave me some granola for the holidays and I thought it was delicious. I intended to ask her for a recipe, but kind of never got around to it. I sort of mentally dog-eared it in my head and in my typical way, just forgot. 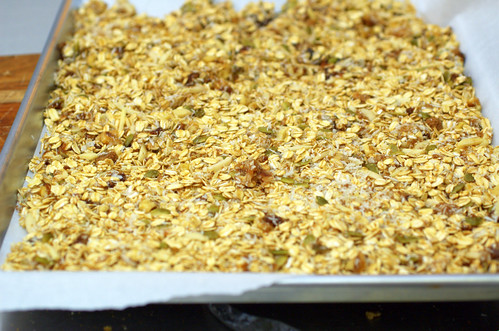 But recently, I’ve been trying to banish the cookie and embrace the healthy. And in my attempts in doing so, I’ve been eating a lot of plain yogurt. Now, I am one of those people who actually loves the taste of plain yogurt (don’t judge me) and won’t eat its flavored cousin, but even yogurt, in all its glory, unadorned by anything, gets a bit dull. And so, in trying to come up with creative yogurt toppings, the idea of granola popped into my head. 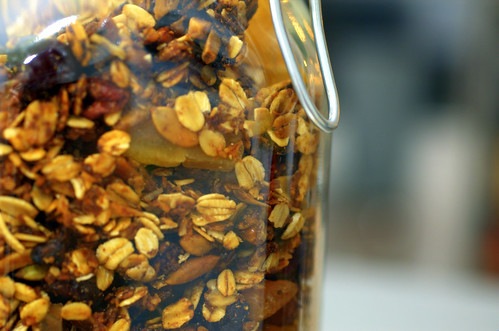 This recipe came from Smitten Kitchen, which in turn got it from Gourmet, which in turn got it from Calle Ocho, a restaurant in New York. What can I say other than this granola recipe is a keeper? Other than a few tweaks I made based on my personal taste preferences, this is a great recipe to have – it’s not too sweet, not overly oily and if you keep your batch in the freezer, it’ll stay crispy indefinitely. At room temperature, it just gets soft, even in an airtight container. 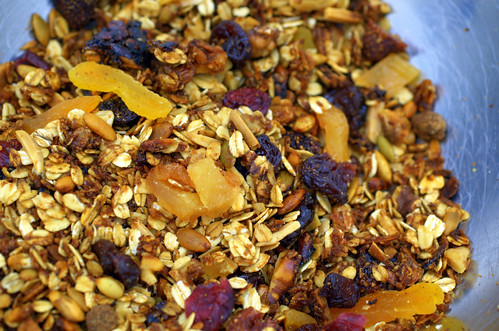 And now I can join the legions of people who actually do like granola because I do as well. And because I am making it, I can add my favorite ingredients, like various dried berries, and make the sum of the parts precisely what I want it to be – plain yogurt, you’ve never tasted better!

**UPDATE 11/24/13: Since many years have passed since I’ve started to make my own granola, I changed up quite a few things and tweaked the recipe for you here. I now make my granola with extra-virgin coconut oil. I can’t stress enough its nutritional properties and it goes so perfectly with the coconut flakes. More importantly, I’ve scaled back sugar considerably. I like granola, but 90% of the time, it’s candy masquerading as healthy breakfast food. In playing around with sugar amounts, I found that decreasing sugar didn’t affect the quality of the granola, but its less sweet taste made it far more exciting to eat. Also, I gave up on using lots of different dried fruit because I much more prefer a pop of tart dried cherries than other fruit and it keeps my pantry less cluttered. (Also, cutting dried apricots is a PITA.) Finally, I added a little nutmeg and scaled up salt (but not by much) because with a proper amount of salt, this granola tastes much better than with just a pinch. In cooking, salt is a great highlighter of flavor – and using just the right amount not only brings a balance to the dish but also creates complexity.

Preheat oven to 300°F; position the rack in the middle. Stir together all ingredients except the cherries and spread the mixture evenly on a half-sheet baking pan. Bake for about 40 minutes, stirring every 10 minutes, or until golden brown and toasted. Transfer to a cooling rack and let cool completely. Stir in dried cherries.