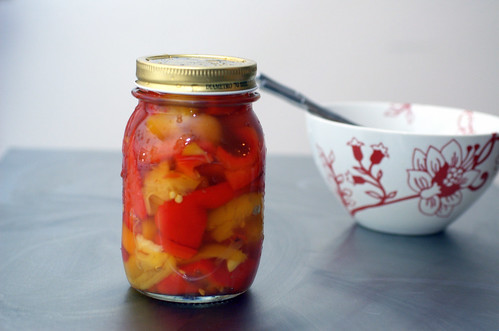 Among foods I can eat in near unlimited quantities, pickled things are at the top of the list. Perhaps because when I get hungry I don’t crave anything sweet (though worry not, I have quite the sweet tooth as evidenced by the cavity-forming December), but savory and salty. And there’s vinegar present – all the better.

In Russia, when I was growing up, fresh fruit and vegetables were not available in the winter (other than things like potatoes and carrots) and so we did a lot of our own canning at home. My mother would boil the jars and put place tomatoes, cucumbers, cornichons, or mushrooms in them and pour warm vinegary pickling marinade over, then sealing the jars. How she did this, I haven’t a clue – her canning skills were impeccable, and everyone knew her pickled tomatoes as the best around. To this day, even the best of Brighton’s tomatoes don’t hold a candle. Yes, I had a marvelous, gastronomic childhood. 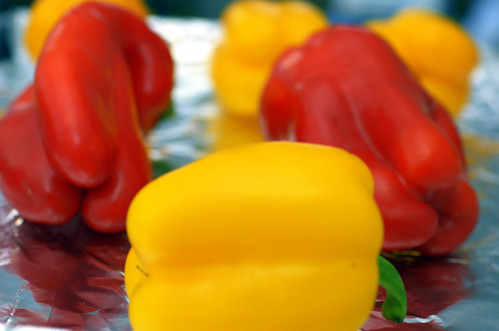 We didn’t pickle anything ourselves after coming to America and it’s something I kind of miss. In Russia, pickling was a ritual that got everyone involved in the kitchen, even my father. It was something we did each fall with during the harvest season, to enjoy eating in the cold winter months. Cold winter months in Russia commanded bold, intense flavors and salted or pickled foods went perfectly with a staple like potatoes. Just try putting some marinated mushrooms on top of freshly boiled potatoes, sprinkle some dill and sliced onion and see what happens. For me – it was nothing short of heaven. 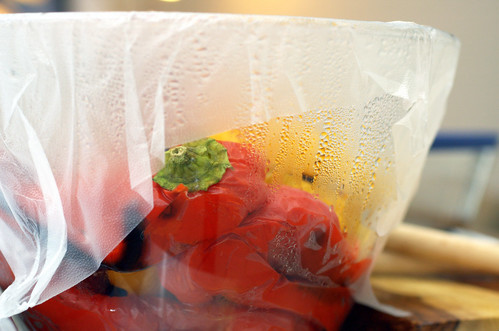 But I digress. I could wax poetic about such simple meals for pages and pages and will only find the deafening snores of everyone around. I’ll quit while I’m ahead and instead tell you that I’ve sort of started to pickle at home. All thanks to Deb and her husband who let me sample some of their pickled garlicky peppers, suspecting, though not knowing fully, the monster they would then create.
The very next day after sampling these amazing things, I marched to my produce place – that manages to sell peppers at reasonable prices this time of year, and picked up ten peppers and a head of garlic. While I always have garlic at home, I see no reason NOT to pick up more of it when there’s an opportunity to do so. 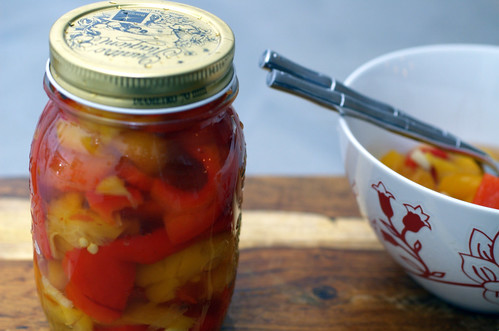 I’m telling you – waiting twenty-four hours for the peppers to be ready was twenty-four hours too long, and the first moment I could, I piled a generous helping into a bowl, sat on my couch, and devoured these peppers in one instant. Undoubtedly, these will become a regular staple in my kitchen now, because they are delicious, easy to make and go with virtually everything. Or at least I think they do. And while it’s not the traditional type of pickling, it’s close enough for me and serves as a lovely and comforting reminder of a childhood memory. 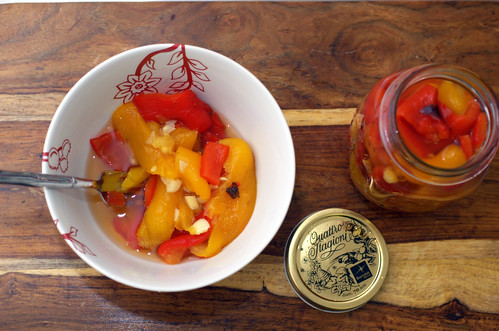 10 bell peppers, red or a mix of red, orange or yellow (the sweet varieties)

4 large cloves of garlic, coarsely chopped (this will give your peppers a serious garlic kick, but that’s a good thing in my book, and hopefully in yours as well!)

Roast the peppers:
Preheat the oven to 400 degrees. Line peppers on a large baking sheet and roast them for 45 minutes, turning them once, or until they are soft. Better to extend the cooking time than shorten it, as the skins will only come off easily if they’re fully cooked.

Prepare pickling liquid:
Bring pickling-liquid ingredients to a boil in a 3-quart nonreactive saucepan over moderate heat, stirring until sugar is dissolved. Cool about 30 minutes.

Once peppers are roasted:
While they’re hot, throw the peppers in a large bowl and cover it with a lid or plate, trapping the steam inside. In 15 minutes, they should be cooled, and their skins should be easy to remove. If not, give it another 10 or 15 minutes to rest.

Once all of the pepper skins are removed, remove the core and seeds, and tear the peppers into strips, tossing them into a large bowl, jar or container. Pour the pickling liquid over the peppers (if you have extra brine, save it for next time) and add the chopped garlic. Chill them, covered with a lid or plastic wrap, for one day.

Pickled vegetables keep, covered and chilled, for 1 week, but good luck if they last that long in your fridge – I doubt it.