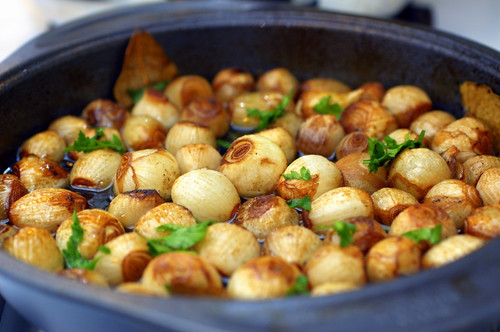 Honestly, if someone told me I had to go and live on a uninhabited island and could bring one vegetable with me, it would be an onion. My kitchen feels oddly empty when I run out, which is why I buy loads of them at once as if the great onion famine is going to set in any day. I always wonder about the folks in the check-out line with a singular onion – why just one? Can’t you just chop up a great deal of them and make caramelized onions, spread them on bread with a little fleur de sel and you have a meal fit for a king?

Consider the onion – it is a humble thing. It’s subterranean, for one, growing in the dirt. It isn’t all sweet and welcoming like a carrot is, for instance. It’s never been serenaded, unlike, say the plum. Songs have not been written about it unlike beans for example. It’s got a smell, a bite, and it makes you cry. It’s cheap, fairly pedestrian and socially maligned (just try ordering a salad for lunch with onions and see what happens). And yet, what sandwich would be complete without it? What soup wouldn’t get more depth if you took on onion out? Making stock? Better have an onion on hand. 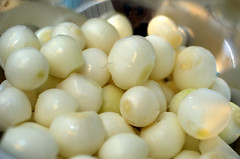 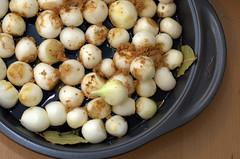 And when I say I can be giddy with a piece of hearty bread, topped with slowly caramelized onions and fleur de sel, I’m not lying. As a child, it was one thing my mother could make at any time and I would eat it. All of it. Without leaving so much as a little onion piece behind. I would have turned down chocolate and cookies just to sit down with a bowl of caramelized onions. And I might be the only one out there who swoons at the word “allium” – I once name my goldfish that. Unfortunately the goldfish lived an additional three hours and then decided it was time to go belly up. Perhaps it was offended at the name, but I meant it in the highest of compliments. 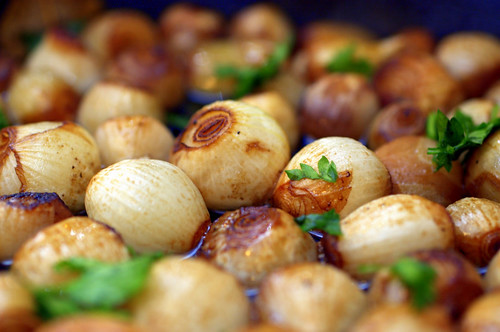 So let me just warn you before I give you the recipe for this. If you’re an onion fan and if the thought of slow-cooking an onion gives you weak knees like it does to me, run to the grocery store and get the ingredients to make this. Go now, don’t wait. As a side dish this is perfection. Roasted in port, these are luxurious, earthy, fully developed flavors. While peeling them is time consuming and is a pain, the end result is so worth it. Besides, roasting the onions in port makes the dish anything but pedestrian.

Preheat the oven to 250 degrees F.

Transfer to a baking dish. Add Port, broth, bay leaves, brown sugar and balsamic vinegar. Cook for an hour and a half until the onions are nicely browned and the liquid has reduced to a thick syrup.

Serve warm or at room temperature.

DO AHEAD: Can be made 2 days ahead. Cover and chill. Bring to room temperature before serving.