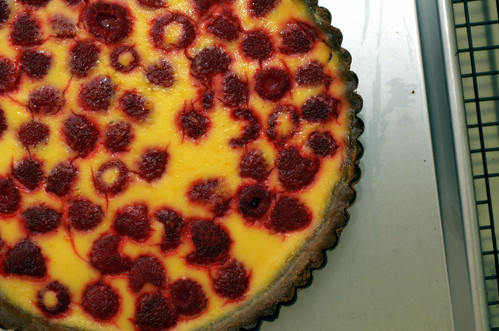 “Are you and your husband doing anything special for the holiday this weekend?” I asked one of my friends the other day

“What, President’s Day? Nah, we’re going to just get a late brunch and watch TV.”

“No, I meant Valentine’s Day.”

“Oh that. Nope, not really, we’re not big on the holiday anyhow.” 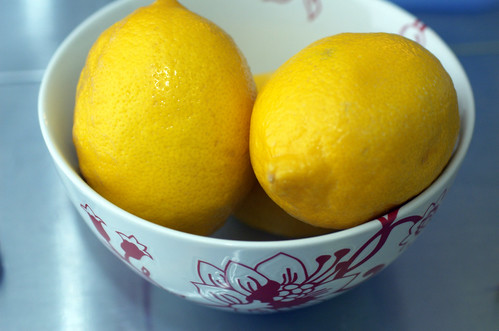 I found it to be amusing, if not a bit refreshing. Don’t get me wrong – I’m a total mush when it comes to romance and love. I am, in fact, a huge cheeseball despite the fact that usually I like to pretend that emotions are wholly superfluous. It’s an act I like to put on – call it protective coating. But underneath that veneer of the “dash of high school bitchy” I’m actually someone who actually enjoys cavity-inducing movies like “You’ve Got Mail”. There, I’ve said it – judge me if you will. 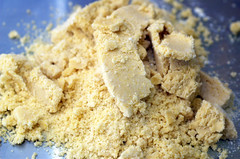 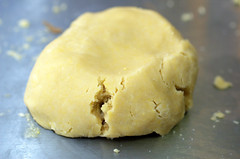 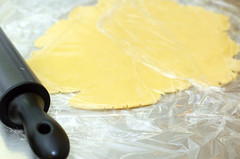 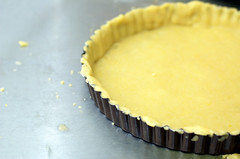 And while I like the idea of Valentine’s Day, it sort of brings about the anxiety on everyone – couples and singles alike. Is your gift good enough? What if you are single on February 14th — does that make you a social outcast? What about the notoriously sub-par food served at restaurants on the day? And finally – the prices of roses are astronomical. There’s no reason to pay 5 times as much for roses on the 14th over any other day. And according to a Real Simple magazine “study”, bodega roses lasted the longest anyway, and were the cheapest as well. Just a practical tip, folks. 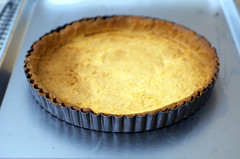 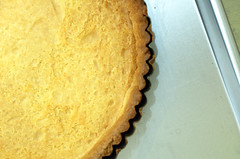 What I do like about Valentine’s Day, however, is the chocolate craze that ensues the day after Christmas. I think that the more chocolate is sold around Valentine’s Day than any other holiday of the year. Candies, chocolates, cakes, cookies – and according to my rules of chocolate consumption – any chocolate consumed around February 14th has no calories. I know it because I feel it in my gut. Do you know you have more nerve endings in your gut than in your head? You can look it up. 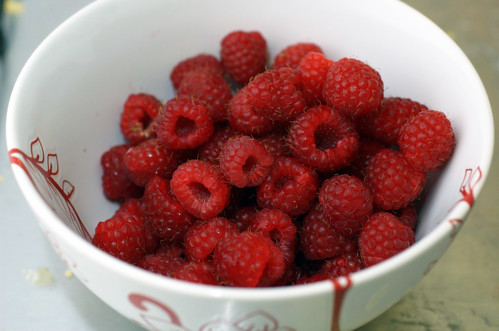 However, I am told, that some people don’t quite like chocolate. Frankly, I am not even sure these said people exist, perhaps they are a cautionary tale, or part of an urban legend, but I’ll go with it for now and pretend that this could be a reality. And while I cannot imagine ever eschewing chocolate, this lemon raspberry tart is so good, so creamy and so intensely lemony, that while eating it, I didn’t miss chocolate one bit. The tart is pure, intense lemon flavor, punctuated by the sweetness of raspberries. Enough to make you feel the sunshine and warmth even on the coldest day of the year. 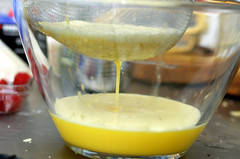 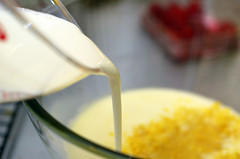 A few thoughts on the recipe – the recipe itself is pretty easy, though I would make the tart dough ahead of time as I’m not big on waiting around my apartment much. But in steps, it’s very achievable. My one big question while I was baking the tart – what does “set” mean when referring to the tart doneness. Is it that the center is set and the sides are slightly jiggly? Or is it that the whole tart needs to be set? If so, what level of firmness am I looking to achieve? When and how would I know I overcooked it besides burning it to a crisp? I think, and I welcome your thoughts and suggestions here – that “set” means the whole tart has to be solid and not jiggly. I would periodically check on it to make sure as everyone’s oven is slightly different. And lastly, the tart surface cracked a bit later on. Something I could have remedied with some powdered sugar, but didn’t quite think about it at the time. I’m not sure if it cracked because I overcooked it, undercooked it or because that just happens with custards. It tasted perfectly cooked to me and everyone who ate it. In fact, despite its less-than-perfect look, it was the first dessert to disappear from the New Year’s table. [Yes, I am horribly late with this post, I know.] 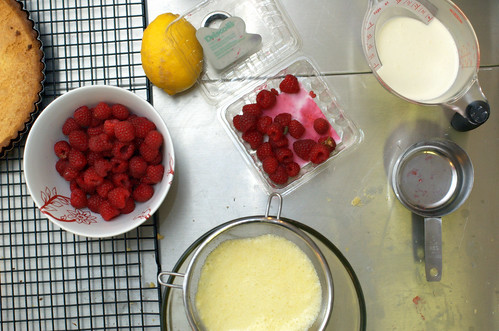 And you know you’ve done something right when no one at the dessert table even mentioned chocolate. And for a few intense lemon-filled minutes I even forgot its existence and would have even turned it down. Because lemons, at their best, are that seductive. But please, keep this secret between us. Don’t tell chocolate about it! 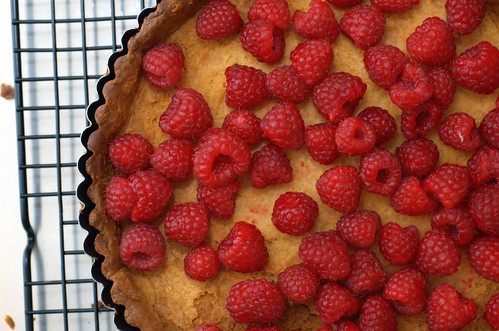 Hey, lady! Thanks for the recipe but I still want my chocolate! Well, ok. How about the following recipes to satisfy your chocolate tooth? 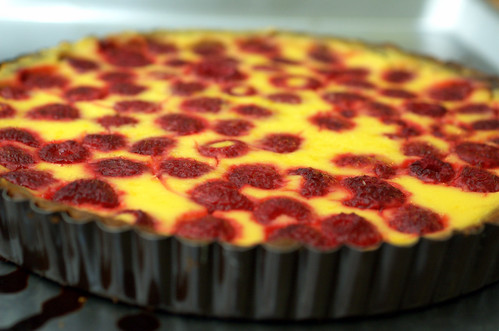 The crust
1 partially baked 9 1/2-inch tart shell (in a fluted tart pan) — recipe below
If the crust is not on a parchment- or silicone-mat-lined baking sheet, transfer it to one and set it aside.

2. Finely grate the zest of both lemons; set aside. With a small knife, cut off the top and bottom of each lemon and then carefully cut away the cottony white pith and a tiny bit of flesh from each lemon–the juicy sections of lemon should now be completely exposed. Lay the lemons on their sides and cut each lemon crosswise into 1/2-inch-thick slices; remove the seeds.

3. Place the lemon slices, eggs, yolks and sugar in the container of a blender and puree until smooth. Strain the mixture into a bowl and whisk in the reserved zest and the cream. Give the bowl a good rap against the kitchen counter to de-bubble it–if there are bubbles in the cream now, there will be bubbles in your tart later. (It’s not tragic, but neither is it attractive.)

4. Scatter the berries over the bottom of the crust and pour over the filling. Bake for 35 to 40 minutes, or until the filling is set in the center. Transfer the tart to a rack and cool to room temperature.

To serve: Cut the tart into 8 wedges and serve as is with some lightly sweetened whipped cream, raspberry coulis or even a spoonful of berry marmalade.

1. Put the flour, sugar and salt in the bowl of a food processor and pulse a few times to combine. Scatter the pieces of butter over the dry ingredients and pulse until the butter is coarsely cut in–you should have pieces the size of oatmeal flakes and some the size of peas. Stir the yolk, just to break it up, and add it a little at a time, pulsing after each addition. When the egg is in, process in long pulses–about 10 seconds each–until the dough, which will look granular soon after the egg is added, forms clumps and curds. Just before you reach this stage, the sound of the machine working the dough will change–heads up. Turn the dough out onto a work surface and, very lightly and sparingly, knead the dough just to incorporate any dry ingredients that might have escaped mixing.

2. To roll or press the dough into the pan: Butter a 9-inch fluted tart pan with a removable bottom.

* If you want to roll the dough, chill it for about 2 hours before rolling (unless you’ve used frozen butter and the dough comes out of the processor firm and cold, in which case you can roll it immediately). I find it easiest to roll this dough out between two sheets of plastic film – make sure to peel away the film frequently, so it doesn’t get rolled into the dough.
* If you want to use the press-in method, you can work with the dough as soon as it’s processed. Just press the dough evenly over the bottom and up the sides of the pan. Don’t be too heavy-handed – press the crust in so that the edges of the pieces cling to one another, but don’t press so hard that the crust loses its crumbly texture.

3. Freeze the crust for at least 30 minutes, preferably longer, before baking.

4. To fully bake the crust: Center a rack in the oven and preheat the oven to 375°F.

5. Butter the shiny side of a piece of aluminum foil (or use nonstick foil) and fit the foil, buttered side down, tightly against the crust. (Since you froze the crust, you can bake it without weights.) Put the tart pan on a baking sheet and bake the crust for 25 minutes. Carefully remove the foil. If the crust has puffed, press it down gently with the back of a spoon (or prick it with the tip of a small knife). Bake the crust for another 8 minutes or so, or until it is firm and golden brown, brown being the important word: a pale crust doesn’t have a lot of flavor. Transfer the pan to a rack and cool the crust to room temperature.

Makes enough for one 9-inch crust