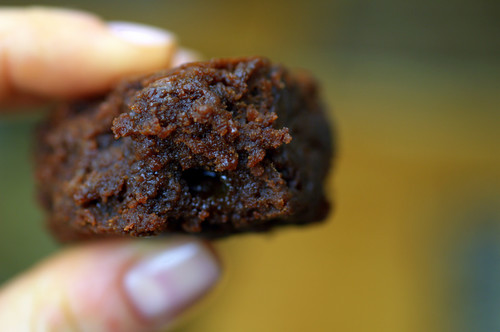 There is a reason that this post is devoid of any great shots of stacks of brownies or brownies on a plate with a glass of milk. I had a bit of a photography snafu with these at I’m entirely at fault here. You see, when you cook in a small, counter-deficient kitchen and you lack grace (my friends know I do), things sometimes fall, often making a mess, often changing their intended shape from the impact of the fall. Sometimes, I have to make a new batch of that something it winds up in a pile of crumbs all over my kitchen floor. A freshly washed kitchen floor, mind you. 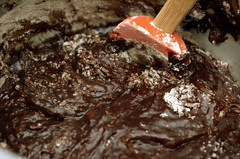 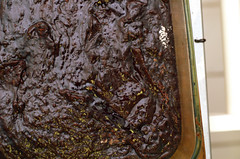 And so with such fabulous coordination such as mine, I was about to take pictures of these brownies perfectly cut in carefully measured (with a ruler!) squares, when I turned to grab my camera and heard a loud crash. And as luck would have it, I had no time to make a second batch of these, and was dashing out to cook more food at a Super Bowl party Paul and Sharon (my newly engaged, cake-decorating-kit-giving friends) were hosting. I looked down to where the baking dish had fallen and was both relieved and aghast – the brownies, magically fallen in such a way that nothing, but a few loose crumbs fell out onto the floor. Everything was still inside the baking dish. But. Oh, but of course there’s a “but”. The perfect squares were no more. Instead, they were erratic shapes of brownies looking like random displaced countries cut out from a map.

At this point, I had to make do with what I had. I packed them as best as I could and took them with me to Brooklyn. They were dubbed as the world’s best tasting ugliest brownies. And you know what? We loved them just fine. 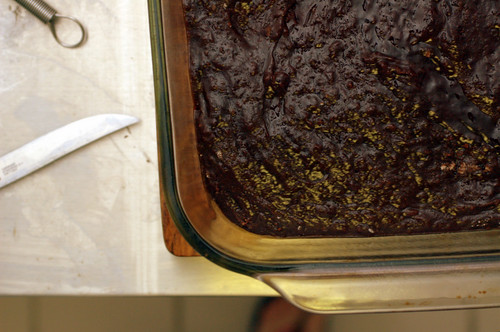 Now, a word about these brownies. These are from the Baked cookbook I’ve made the peanut butter chocolate bars from and the Sweet and Salty Cake, and no, the Baked folks aren’t asking me to sing their cookbook praises, but I can’t help myself. First, the cookbook is excellent and features recipes I’m itching to make. And secondly, I don’t have that many dessert cookbooks, or cook books to begin with, at this point in time. And finally, I’ve had such luck with recipes in this book, I’m itching to try a dozen others!

But these brownies are serious business – deep, dark, bitter chocolate is a fantastic thing in and of itself. But if you add a little heat to it, I think the chocolate flavor becomes more complex and lingers on your palate longer. It elevates the brownie to a very sophisticated treat and while I’m always an advocate for presentation – you’ll love them no matter what they look like! 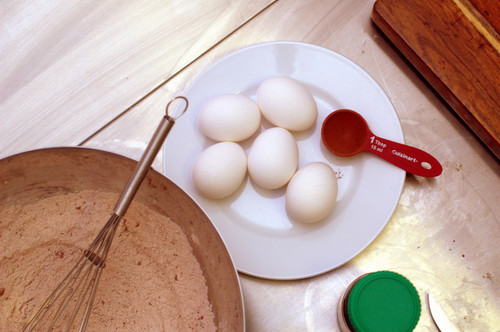 1. Preheat the oven to 350 degree F. Butter the sides and bottom of a 9-by-13-inch glass or light-colored metal baking pan.

2. In a medium bow, whisk the flour, salt, cocoa powder, cayenne and paprika together.

3. Put the chocolate, butter, and instant espresso powder in a large bowl and set it over a saucepan of simmering water, stirring occasionally, until the chocolate and butter are completely melted and smooth. Turn off the heat, but keep the bowl over the water and add the sugars. Whisk until completely combined, then remove the bowl from the pan. The mixture should be room temperature.

7. Tightly covered with plastic wrap the brownies will keep at room temperature for up to 3 days. [good luck keeping them that long]