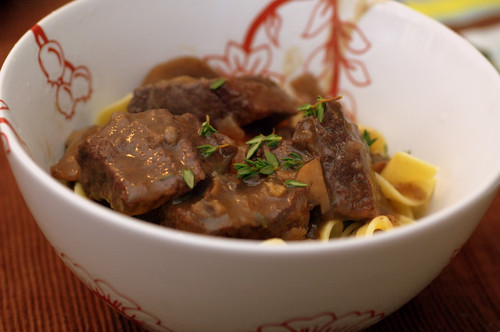 Even though I keep claiming to have broken up with winter a couple of weeks ago, I’m still carrying my gloves and wearing my scarf and wool coat because it’s just not that warm in the mornings are evenings. Sure, the temperatures claim to be more temperate during the day, but that also happens to be the time when I sit in front of a computer, inside, and deal with client related matters. And so upon leaving the office, I’m once again met with a rather persistent chill. A chill that’s clearly being shoved out by the onset of spring, but like a guest that overstays his welcome, this chill lingers in hopes perhaps of sticking around another week or two. 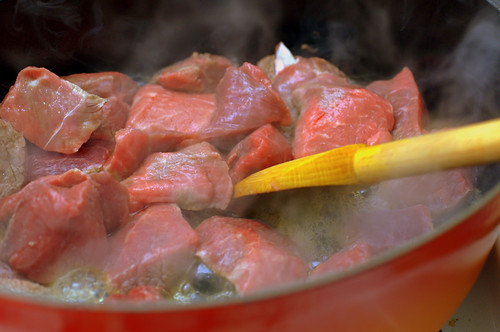 Well, despite the fact that I’ve been ready for spring for quite some time, the weather still dictates warmth and comfort when it comes to my food. A salad sounds delightful in theory, but when all is said and done, when I get home from work, what I want is something soft and warm and filling. And beef bourguignon fits the bill. 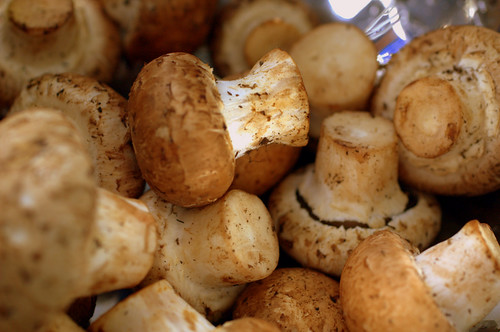 I meant to make it all winter season and yet something would always upstage it. A soup, a chicken dish, cake, even (hey, cake can totally be dinner). Honestly, I can’t figure out why because this is so good and so flavorful that I should have made it in large batches over and over and frozen portions for later consumption. Better yet, this dish gets better the next day after the flavors had a chance to develop, which makes for leftovers you’d be looking forward to having. 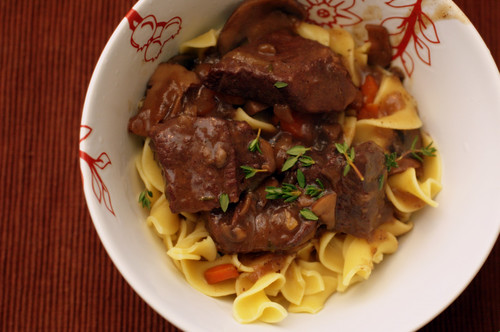 I’ve been making this recipe for years and it was made by a friend’s mother, so I watched it from her. She is French and did not use the expected pearl onions, finding them to be a bit too fussy. She also chose not to strain her vegetables and serve the stew as it is. I find it most satisfying over a bowl of egg noodles.

In a heavy bottomed Dutch oven, over medium-high heat, add a tiny bit of olive oil along with the beef, browning the beef on all sides. Remove the meat and set it aside.

Add the rest of the olive oil and saute onions, shallots, carrots and mushrooms, stirring from time to time, until the onions look translucent and slightly golden and mushrooms have reduced in size. Add the wine and bring to a simmer. Add back the meat, the broth and bay leaf, thyme and garlic.