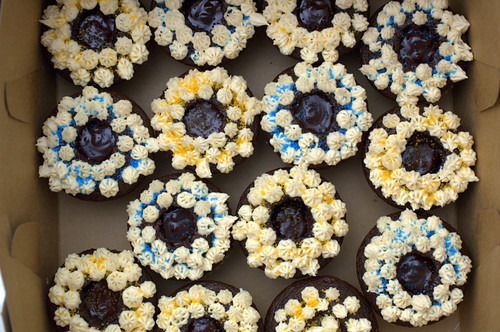 The second I spied these cupcakes on Smitten Kitchen, I was obsessed. And it took me oh, just 24 hours to get to my obsession and actually materialize it. Sometimes when you’re inspired – you’re inspired. And if you show me a baked good that has not one but three types of alcohol in it, well, I’m completely defenseless. And if it happens to have an Irish theme to it, that pretty much settles it – I’ll be making the dessert in question that very evening. Not to mention, Deb made her cupcakes so pretty (when does she not make dessert pretty?) that I went home, muttering under my breath something about finally getting my cake decorating kit out and it was about bloomin’ time (thank you Paul and Sharon!) 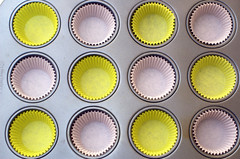 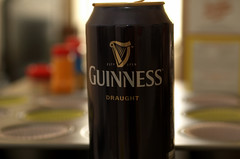 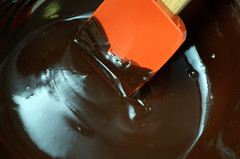 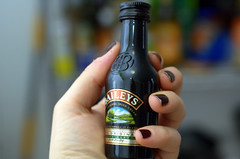 In the next few days, I learned that these cupcakes (which were a smashing success at a friends’ game night party – for whom I have this message – please do not stop making such strong margaritas else our Coyote Ugly rendition will be nowhere as fierce) – contained the trifecta of beverages used to make a cocktail with a rather sensitive name – The Irish Carbomb. The cupcake offers you Guinness beer in the cupcake batter, Jameson in the chocolate ganache and Baileys liqueur in the frosting. 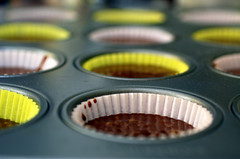 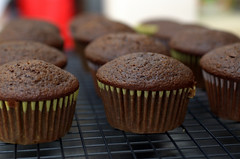 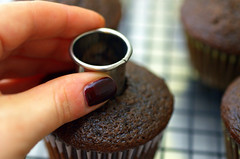 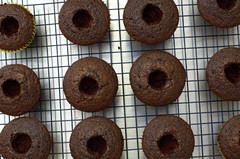 According to some folks, ordering this particular drink at an Irish pub will get you a black eye or a missing tooth. My Irish friends all confessed to me to have ordered it on more than one occasion and their eyes/teeth remained intact and don’t see what the big deal is about the name. Still, I can see why some might not appreciate the drink name – given it’s not my invention, I suppose it is what it is. It is a name with a not such glittery connotation. 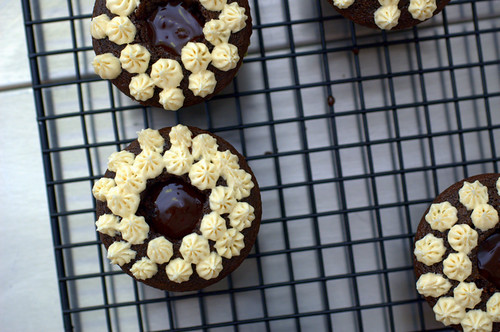 In any case, these were terribly fun and easy to make and I know they look a little much and complicated. And it was my first time ever piping the frosting, so you see that even for a beginner, this was not such an ordeal. In any event, I thought they were nowhere near as difficult as the Sweet & Salty Cake, which gave a few gray hairs here and there (don’t worry, I got highlights and no one can tell anymore!) 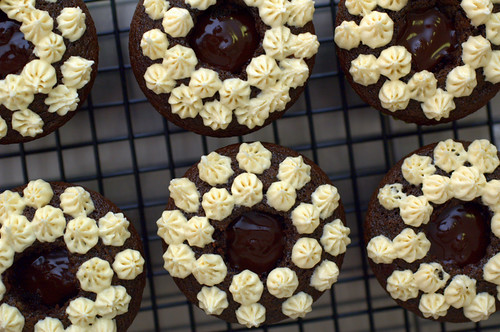 And because Deb wrote about how sweet and strong the frosting was, I decided to make the frosting even more sparse omitting it from the center and thus creating little cupcake flowers. There. Pretty, right? I kind of liked them that way and my friends did too. Some people wound up having two, in fact. For me, one was more than enough as, while I liked them, they were quite powerful and sweet. 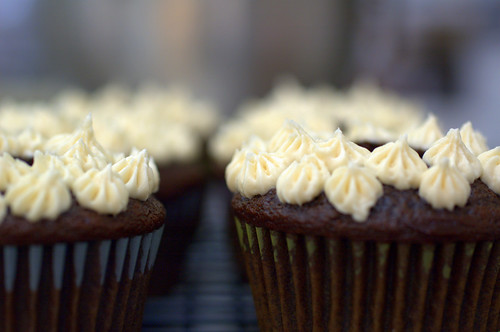 If you’re thinking of an Irish-themed dessert for St. Patrick’s Day, think no further than this! These cupcakes are a true homage to the Irish bar offering (not entire Irish bar offering though) – and will add a festive touch to any way you choose to celebrate, be it a home-cooked meal or a bar crawl in your local town. 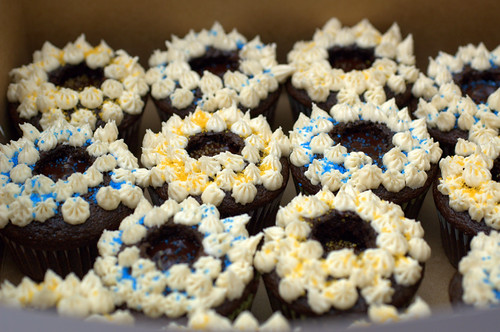 While I really dislike the taste of Baileys, the flavor of it in the frosting is really lovely, actually and while strong, not like what you’d expect. The amount of frosting isn’t that much, so frost your cupcakes sparingly – and because the frosting is so sweet, a little will go a very long way.

Special equipment: 1-inch round cookie cutter or an apple corer and a piping bag (though a plastic bag with the corner snipped off will also work)

Whisk flour, sugar, baking soda, and 3/4 teaspoon salt in large bowl to blend. Using electric mixer, beat eggs and sour cream in another large bowl to blend. Add stout-chocolate mixture to egg mixture and beat just to combine. Add flour mixture and beat briefly on slow speed. Using rubber spatula, fold batter until completely combined. Divide batter among cupcake liners, filling them 2/3 to 3/4 of the way. Bake cake until tester inserted into center comes out clean, rotating them once front to back if your oven bakes unevenly, about 17 minutes. Cool cupcakes on a rack completely.

Make the filling:
Chop the chocolate and transfer it to a heatproof bowl. Heat the cream until simmering and pour it over the chocolate. Let it sit for one minute and then stir until smooth. (If this has not sufficiently melted the chocolate, you can return it to a double-boiler to gently melt what remains. 20 seconds in the microwave, watching carefully, will also work.) Add the butter and whiskey (if you’re using it) and stir until combined.

Fill the cupcakes:
Let the ganache cool until thick but still soft enough to be piped (the fridge will speed this along but you must stir it every 10 minutes). Meanwhile, using your 1-inch round cookie cutter or an apple corer, cut the centers out of the cooled cupcakes. You want to go most of the way down the cupcake but not cut through the bottom — aim for 2/3 of the way and circle it around until it comes out with the cake part inside. A slim spoon or grapefruit knife will help you get the center out. Keep those to snack on – I did! Put the ganache into a piping bag with a wide tip and fill the holes in each cupcake to the top. (It helps to slightly chill the ganache after you put it inside the piping bag – that way you can control how much you squeeze out.)

Make the frosting:
Whip the butter in the bowl of an electric mixer, or with a hand mixer, for several minutes. You want to get it very light and fluffy. Slowly add the powdered sugar, a few tablespoons at a time. By adding the sugar slowly, you get a smoother, less chalky taste to your frosting.

When the frosting looks thick enough to spread, drizzle in the Baileys (or milk) and whip it until combined. If this has made the frosting too thin (it shouldn’t, but just in case) beat in another spoonful or two of powdered sugar.

Ice and decorate the cupcakes. I copied Deb and used a star tip and made little “poofs” everywhere and sprinkled it with various colors of sanding sugar for a pretty effect.

Deb’s do ahead tip:
You can bake the cupcakes a week or two in advance and store them, well wrapped, in the freezer. You can also fill them before you freeze them. They also keep filled — or filled and frosted — in the fridge for a day. (Longer, they will start to get stale.)