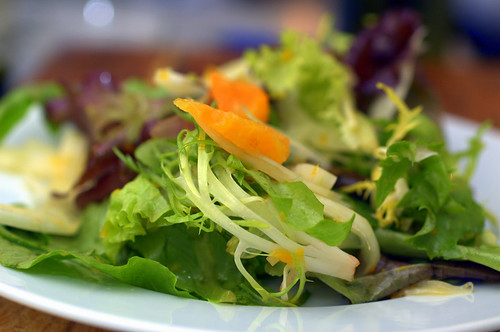 My relationship with fennel is reminiscent of an old Hollywood movie , when the heroine says “He’s the most despicable man I’ve ever known!” you know that the two are bound to fall madly in love with one another.

And so it was with me and fennel. I can’t think of a single vegetable, besides fennel, I’ve ever taken an issue with. The mere smell of it, used to send me into gag mode. When a friend insisted on making it for Thanksgiving one year, I struggled with the its “aroma” during the course of the meal. Perhaps it was because of the smell that I had hardly eaten anything that Thanksgiving dinner – I simply couldn’t get past the anisey fragrance of it. But, I had this this feeling that sooner or later I’d have to eat my words. 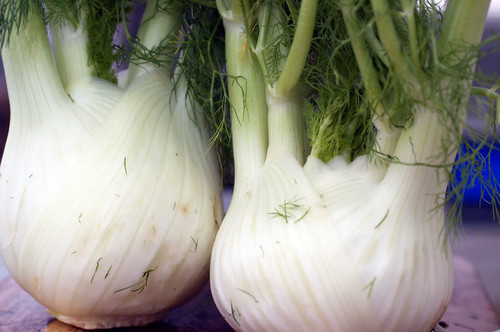 They say that your palate changes every seven years. Things you might not like at first, you might grow to appreciate later. Which is why I am always open to trying food again, to see if maybe something has changed for me. With fennel, it definitely has – because I now find its taste to be rather pleasant and refreshing. And I’ll be the first one to say that there are times when fennel is a lovely and beautiful thing and not something to be reviled. Thinly sliced in salads, complemented by salt, or fruit, it is something I actually am craving this spring season.

Yes, I’m in spring mode, dear readers. I’ve embraced the fact that it’s around the corner and if you tell me I’m delusional, I’ll simply place my hands over my ears and chant something to drown you out. I’m done with winter, I’m done with snow, and I’ve packed away my scarves and sweaters. Winter will simply have to take the hint. We’ve broken up for good for the next 9 months, and I’m moving on to brighter, greener things! Things that bring baby vegetables and strawberries and rhubarb. I’m ready. Spring – bring it.

And so this salad is the most lovely of ways to welcome spring into your home – and the secret is the dressing – it’s simply divine. And yes, I am gushing about a fennel salad. Fennel – my arch-nemesis. I now can write fennel an ode. Especially when it’s in this salad. 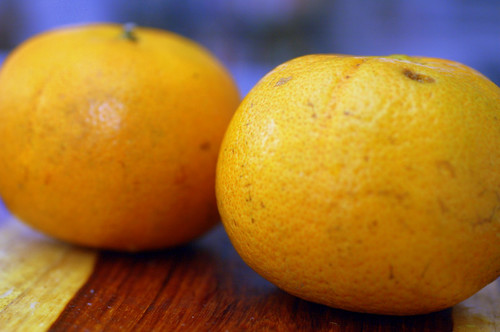 I remember the first time I ate and liked fennel. My then-boyfriend and I were staying with his friends’ place in the Hamptons and someone made a fennel and apple salad with mixed greens. I didn’t want to offend the hostess so when she handed me a plate full of salad, I politely accepted and put a forkful in my mouth. To my surprise, the taste was altogether different from what I expected. The fennel was delicate, ribbon-like and crisp and the tartness of the apple added a nice layering of flavors. It was perfect.

And so from that moment on, thinly shaved fennel salad and I were fast friends. I kept worrying at first, expecting the taste to turn on me, expecting to hate the flavors, but each time, fall a little deeper and deeper in love with fennel. I know – in love! Terribly cliché, I know, but how many can say they’ve had a Hollywood-style love affair with a food? 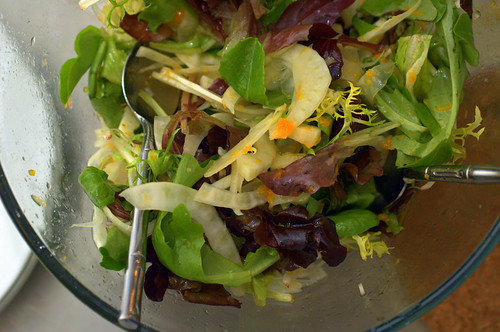 I spied this fennel tangerine salad in March issue of Bon Appetit and knew instantly this would be a hit. Indeed, when I served it to my guests, we all had seconds. Such enthusiasm for vegetables? Now that’s a recipe worth keeping! Besides with bikini season just around the corner – a good salad is a worthwhile pursuit – call me vain.

2. Divide greens among 4 plates. Scatter sliced fennel and tangerines over. Sprinkle with salt and pepper. Drizzle dressing over, sprinkle with chopped fronds, and serve