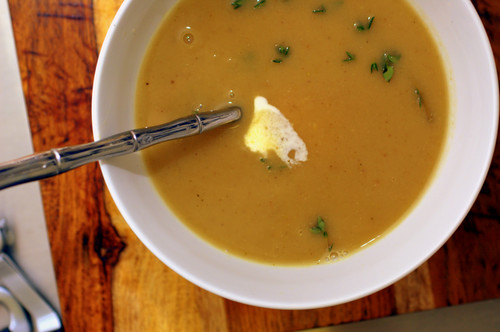 While winter is quickly receding and signs of spring are beginning to emerge (or so I hope), I still want you to go and make this soup. As soon as possible. Tonight even perhaps. I’m sure you had a nice dinner planned, but it’ll have to wait – this soup is worth it. I promise you, you’ll thank me later. After you lick the bowl clean. 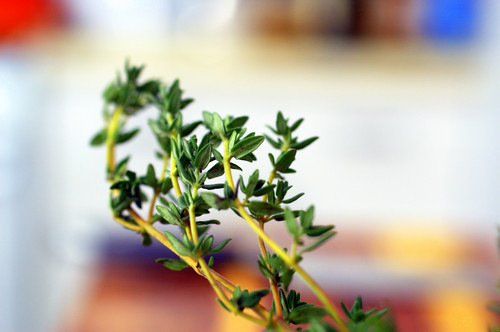 To say I build my entire dinner around it on Oscar night, would be an understatement. This soup alone made me want to throw a smallish dinner party for a few close friends and since I couldn’t invite people over just to serve them soup and call it a day, I had to come up with the rest of the menu. But this is the soup that started it all. Oh, and we ate this for dessert. It’s a tough existence, I know. 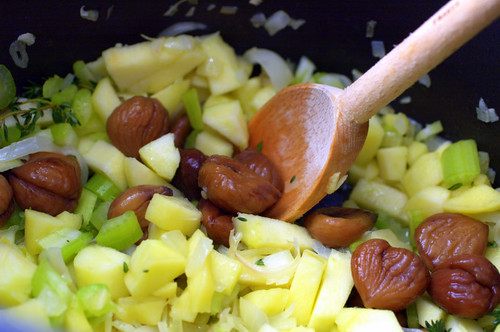 Some people are huge fans of sweeter soups and if you are, you will love this. But I know those who like their soups savory, won’t be able to resist the earthiness of the chestnut perfectly complemented by the apple. A few thyme leaves add some color and contrast to the flavors. The soup comes together in little time and with a few whirrs of a hand blender, you are left with a smooth, velvety texture that sparkles on your palate with a dollop of crème fraîche. If you want to keep this soup vegan, you can omit the dairy. 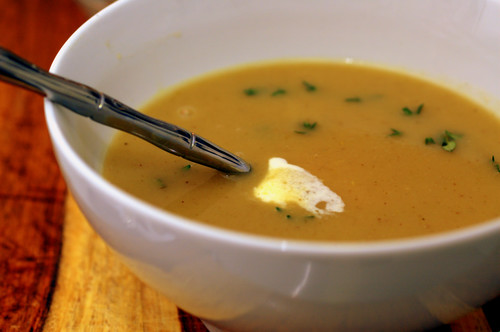 For nights when you have to entertain and come away looking like a fancy-pants chef, this soup is a must. Of course, you’ll be secretly pleased that instead of slaving for hours in the kitchen you spent a mere half an hour putting this together. Let this be our little secret then.

Because you want more Sassy Radish in your life!
I’ve created the Sassy Radish page on Facebook – come on down and become a fan! And if you’re a fan or Twitter, SR is on it as well!

Working in batches, puree soup in blender until very smooth. Return soup to pan and cook until heated through, adding more chicken broth by tablespoonfuls to thin as needed and stirring often, about 2 minutes. Season with salt and pepper.