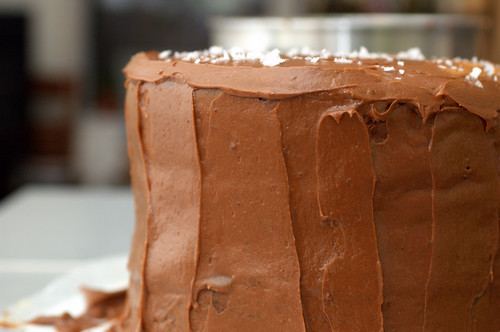 Sometimes a cake is just a cake. You bake it, frost it and then serve it forth to your friends. Everyone loves the cake, of course, and within half an hour you have an empty serving platter with a few loose crumbs; everyone content and grateful for your homemade creation. Sometimes however, a cake turns into a test of your will and persistence and creativity and sheer reluctance to quit. This is such a cake. Don’t say I didn’t warn you.

In this particular case, I had promised to bake a cake for a friend. But I also promised to wow and impress. I’ve long been waxing poetic about salted caramel and so I knew exactly the cake I wanted to make. To me, salted caramel is one of the most seductive foods. I am certain I can be wooed with very modest offerings of salted caramel, herring and cilantro – some things just make a girl weak in the knees. I’m convinced there’s not a soul out there who doesn’t love salted caramel. And if loving salted caramel is wrong, I don’t ever wanna be right. 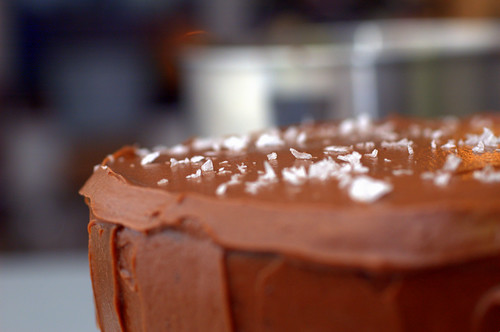 As some of you know, I’m fairly new to this cake-making business. My first foray was earlier this year with the peanut butter chocolate cake, soon after followed by the chocolate dulce de leche cake. And both were fairly straightforward and simple. I had few issues and little to complain about and the end product, in both cases, was a stunner. So I had few concerns going into this recipe. Hoo boy! Was I in for an experience. My quiet humming (something I often do when I am cooking) was soon switched out for the kind of language that typically graces Tarantino films. Let’s just say I’m pleased no children were present in the vicinity to hear my unladylike language. 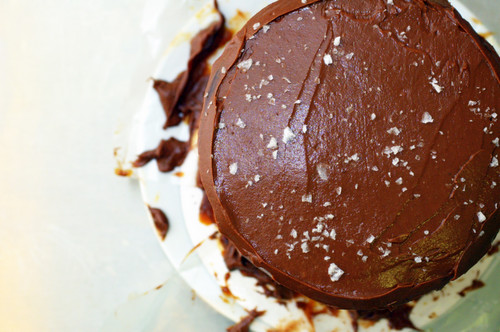 And as irony would have it, for someone who was asked in her chemistry class to skip lab in order to pass (let’s just say I was a bit of a hazard with beakers and Bunsen burners), I marvel at my fascination with baking and being exacting and thorough. Sometimes it’s a breeze and everything comes together beautifully. And sometimes, when you think you’ve done everything right, something doesn’t quite work and you try to figure out what specifically went wrong (this is the part I’m particularly bad at). This cake was a kind of experience when many a thing didn’t quite go according to plan, but I am better and wiser now for it, but there was a moment when I was tempted to dump the whole thing in the trash can and call up my friend and say, “Screw cake. I’m bringing pizza” 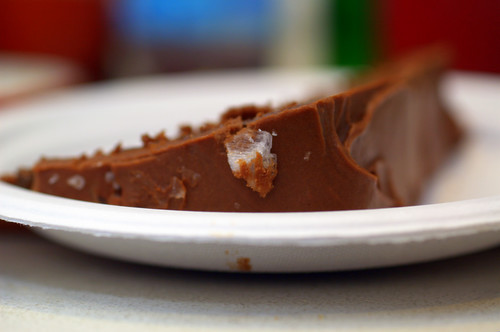 I am tempted to rename this cake as “I’m Going to Tear Hair Out of My Head and Curse Like a Sailor Cake”, but I think that would be too long a title. I’ll keep the original and instead include a few notes that might help you have a less stressful experience than the one I had. Isn’t that nice now, you get a recipe AND some pointers in how to avoid the insanity? I will add my notes to the recipe in italics – so when you see that you will know this is my commentary.

To say this cake was delicious, would be inaccurate. It was quite possibly the most heart-stoppingly amazing cake I’ve had in awhile. And if your heart doesn’t skip a beat because the cake is decadent and rich, it might do so simply because the chocolate caramel whipped ganache contains four (4!) sticks of butter. I cannot tell you enough how fussy and time-consuming this was and how much, in the middle of this project I didn’t regret it. But looking back if I was asked to make this cake all over again, I absolutely would, hopefully this time with less anxiety and curveballs if only because I’m going to use a few of my own learned pointers, which I hope will help you as well, in case you are feeling particularly self-punishing and want to recreate the magic in your own kitchens. 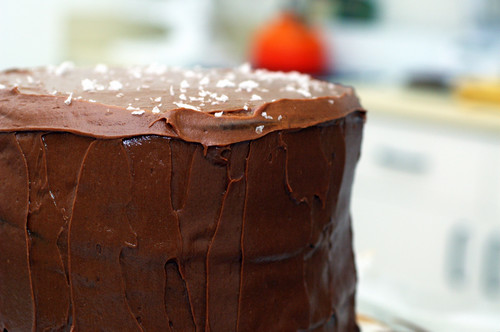 Serve this cake in the tiniest of slivers as it is quite intense and filling. A glass of milk will not only enhance the cake, but for a moment, make you forget about all the pain and suffering you’ve endured at the hands of this towering confection – which will be exactly what you need to enjoy the rest of your night.

Lastly, I would be remiss if I didn’t say that something was decidedly in the air when I was making this cake. The only pictures I had on my photo card were the ones of the already-made cake – the others have mysteriously vanished. Gone. As if they never existed in the first place. So all I have for you are these mediocre finished product shots. You get none of the in-process pictures, which were not half bad. And because I quickly sensed this cake was tricky, I took very detailed step-by-step photographs to walk you though this recipe carefully. But somehow the gods of cake-making must have decided against to play a practical joke on me because I should be really presenting you with “I made this cake, but all I have to show you are these pictures.” T-shirt. Yes, I know, I’d feel cheated too. I owe you one.

3. In another large bowl, sift together flour, baking powder, baking soda, and salt; set aside.

4. In the bowl of an electric mixer fitted with the paddle attachment, beat the butter and shortening together until smooth and it appears to create strings inside the bowl, about 7 minutes. Add both sugars and continue beating until light and fluffy, about 7 minutes. Add eggs, one at a time, and beat until well incorporated. Add vanilla, scrape down the sides of the bowl with a spatula, and mix again for 30 seconds. Add flour mixture alternating with cocoa mixture, beginning and ending with flour mixture.

5. Divide batter evenly among the three prepared pans. Bake until cake is just firm to the touch and a toothpick inserted into the center of the cake comes out clean, 35 to 40 minutes. Let cool completely. I would actually chill the cakes, before frosting, in the freezer for about an hour – so that your frosting job/assembly job is easier. Believe me, the crumb layer is less fussy that way. In fact, you may not need to do a crumb layer and just assemble/frost the cake in one step.

6. Using a serrated knife, trim tops of cakes to make level. Place four strips of parchment paper around perimeter of a serving plate or lazy Susan. Place the first layer on the cake plate. Using about 1/4 cup of the caramel, spread a thin layer on the cake, allowing some of the caramel to soak into the cake. (This will happen ONLY if you trim the tops of cakes, otherwise, nothing will soak into your cake.) Follow the caramel layer with a layer of about 1 cup of the ganache icing. Place the second layer on top and repeat process with another layer of caramel followed by a layer of ganache icing (which you should chill before spreading on the cake, it’s too goupy at room temperature). Place the remaining layer on top of the second layer bottom side up. Spread entire cake with remaining ganache icing. Sprinkle with fleur de sel.

2. Meanwhile, in another small saucepan, mix together cream and salt. Bring cream to a boil and cook until salt has dissolved, 3 to 5 minutes. Remove from heat and set aside.

3. When the caramel mixture has reached 350 degrees, remove from heat and allow to cool for 1 minute. Carefully add the hot cream to the caramel; stir to combine. Whisk in sour cream. Cool, and store in an airtight container, refrigerated, for up to 3 days.

2. In another small saucepan add cream and bring to a boil. Remove from heat and set aside.

3. When the caramel mixture has reached 350 degrees, remove from heat and allow to rest for 1 minute. Add the hot cream to the caramel; stir to combine. Let cool 5 minutes. Place chocolate in the bowl of an electric mixer and pour caramel sauce over chocolate. Let sit 1 minute before stirring from the center until chocolate is melted.

4. Attach bowl to electric mixer fitted with the paddle attachment and mix on low until the bowl feels cool to the touch. Add butter and increase speed to medium-high until mixture is well combined, thickened, and slightly whipped, about 2 minutes.

5. Cool the ganache for 20 minutes or so before frosting the cake for easier frosting.